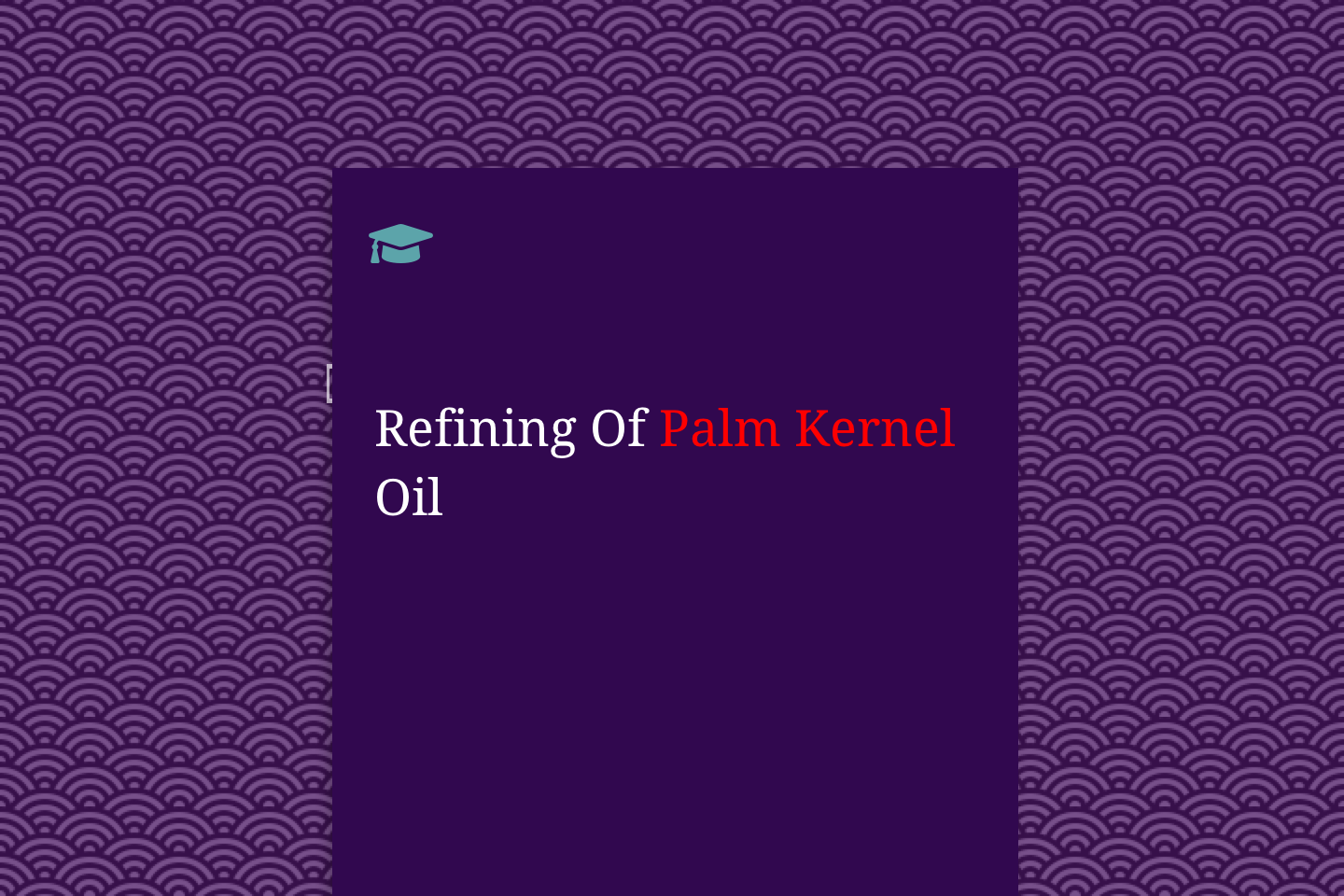 This work studied the refining of crude palm kernel oil derived from the kernels within the nut of a palm fruit.

This research project was aimed at reducing the non-glycerides present in oil in their crude form using an alkali method of refining. The crude palm kernel oil was first washed with distilled water by heating the mixture in an electric heater for about 2 hours to reduce the impurities present in the oil in their crude form, degummed with phosphoric acid and neutralized with NaOH (caustic soda).The saponification value, iodine value and acid value was analyzed and their values are: for crude palm kernel oil, 33.1, 695.45 and 746.13 respectively, for neutralized palm kernel oil, 11.22, 725.6 and 687.24 respectively

Palm kernel oil, the second most consumed lauric acid group oil is derived from the dried kernels of the oil palm, ElaeisGuinensis.

Palm kernel oil (co-product of palm oil) and coconut oil comprises less than 5 percent of the total natural fats and oils, but they are important feed stocks of the oleochemical industry. Coconut oil is commercially a major source of lauric acid, together with palm kernel oil and to small extent babassu oil. It belongs to the so called lauric oils, which are characterized by their high lauric oil content of approximately 50 percent.

The lauric oils are highly desirable materials in the oleochemical industry world-wide because of the important of the lauric fraction especially in the manufacture of soap and detergents.

Palm oil is obtained from the fleshy part of the fruit which resembles an over sized olive about the size of a small chicken egg. Palm kernel oil is derived from that kernel within the nut. Well over 98 percent of the fatty acids in palm oil belong to the C: 16 and C: 18 group where as approximately 64 percent of the fatty acids in palm kernel oil consist of C: 12 and C: 14 lauric group.

A palm tree produces 10-15 fresh fruit bunches throughout the year weighing 5-23kg (10-50lb) each. The bunches are cut from the tree with knives attached to long poles and are transported to the oil mill. There they are sterilized by steam at about 40psig for 56-75 minutes to deactivate lipase enzymes and loosen the fruits from the stalk.

The fruits are knocked loose from the stalk in thresher drums and passed through a digester to convert the fleshy pulp to mash. Then the mash is pressed by twin-screw expellers or hydraulically to yield red crude oil. The shells of the nuts cracked and the kernels are separated, dried and bagged for later solvent extraction or mechanically pressed in a fashion similar to the processing of raw crop oil seeds.

For satisfactory release of the kernels from the fruits, the requirements are that the oil bearing mesocarp shall be removed and the shells cracked without damage to the kernels.

Palm kernel oil is not usually extracted on the plantations, though occasionally mills contain press designed for this purpose.

The conditions for the release of palm kernel oil, which is liquid at tropical day temperatures, are different from those of palm oil, but similar to those of copra and hand oil bearing seeds.

Very small quantities are extracted in producing countries by primitive means but the greater bulk of the palm kernel produced are subjected to industrial process.

Although the extraction of palm kernel oil from palm kernel is not a new project, this project is capitalized on using different types of refining processes to determine the one that will yield a higher output.

Further cultural and agricultural practices differ for its fruit species depending on the type of soil, different samples from different localities were collected in consideration to its essential commercial plantings on which each sample produces high quality fruit/seed and profitable yield. Thus this research study is being conducted.

Palm kernel oils consist mainly of glycerides, and like other oils in their crude form, may consist of small and variable portions of non-glyceride components as well. In order to render the oils to an edible form, some of these non glycerides need to be either removed or reduced to an acceptable level so as to meet the request of the buyers.

Therefore, this project aims at reducing the non-glycerides present in oil in their crude form using the chemical (alkali) method of refining.

The refining of crude palm kernel oil is converting it to quality edible oil renewing objectionable impurities to the desired levels in the most efficient manner where possible, losses in the desirable components are kept minimal.

After refining of crude palm kernel oil, a good quality has low free fatty acid (FFA) content, does not contaminate with water or other impurities and has a good bleacheability.