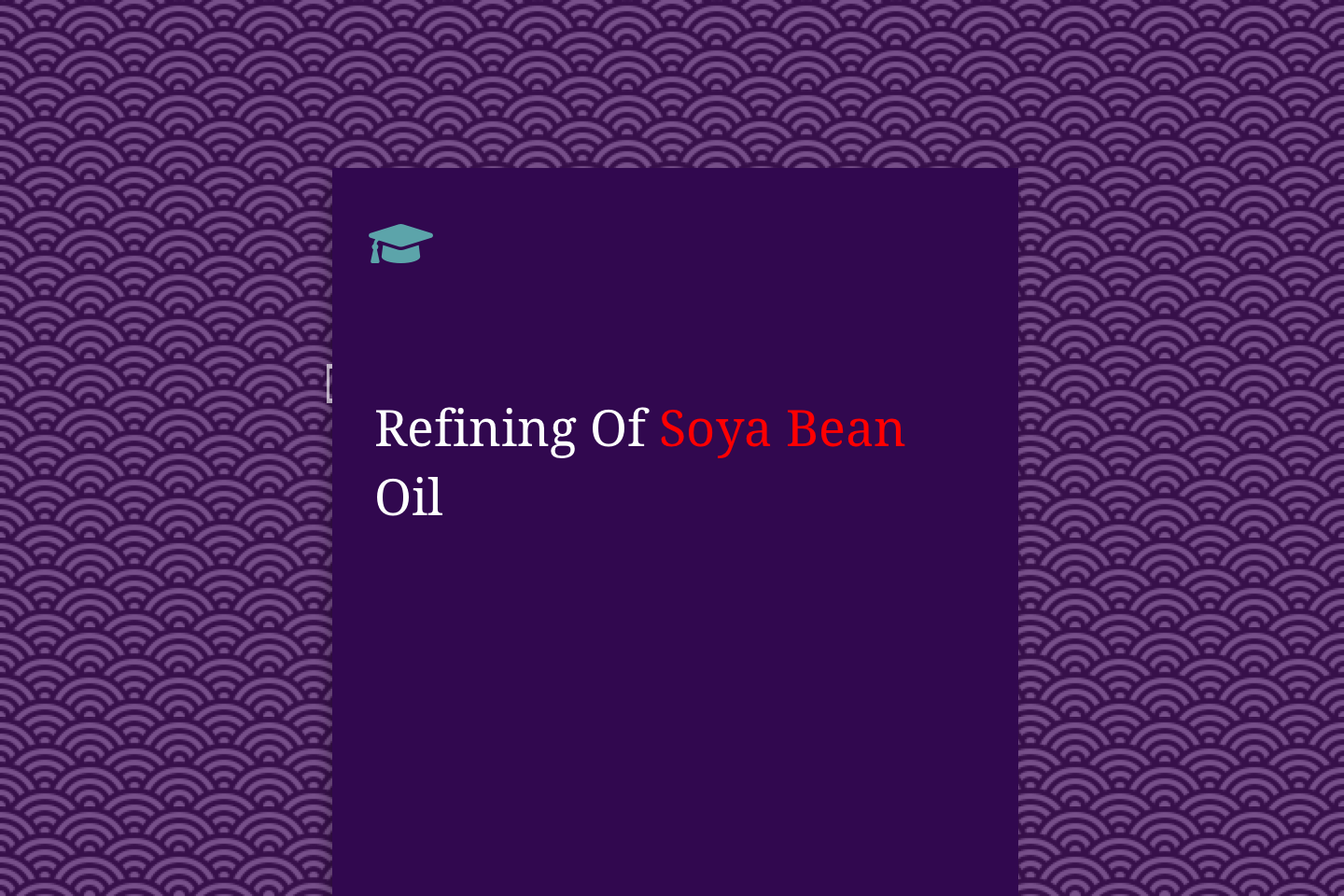 This project work studied the refining of crude soya bean oil extracted from soya bean seed using alkali /caustic refining method. The work was carried out using phosphoric acid for the degumming /pretreatment process and sodium hydroxide for the neutralization /refining of the oil. Certain tests were carried out on both the crude and refined oil such as saponification value, acidic value, iodine value, specific gravity and viscosity, the results obtained after the tests include 42.075, 164.28, 589.05, 0.8944 and 0.038 respectively for refined oil and 44.88, 109.52, 448.8, 0.8148 and 0.035 respectively for the crude oil.

Refining of vegetable oils is essential to ensure removal of germs, phosphatides and free fatty acids (F.F.A) from the oil, to impact uniform colour by removal of colouring pigments and to get rid of unpleasant smell from the oil by removal of odiferous matter. Refining is carried out either on batch operation or as continuous operation. With certain oils even physical refining can be carried out instead of chemical.

For processing less than thirty tones of oil per 24 hours, and when oil has F.F.A content of 1 percent or less normally batch process is recommended. Batch process involves low capital investments, simplicity of operation and low maintenance, making refining economically a viable proposition even at capacity as low as 10 tonnes per 24 hours. (According to Dietary fats and oils in Human Nutrition. (Rome 1977)).

Soyabean oil is produced from the seed of the legume called soja max or calyclue max. The seed has an oil content of about 20%, it is the highest volume vegetable oil produced in the world. The crude oil is obtained by pressing or solvent extraction method. The main uses of the oil after refining, bleaching and deodorization and partial hydrogenation are in the manufacture of Magrine and shortening. The unhydrogenated oil is also used in blends with other oil but its tending to revert when exposed to air or higher temperatures limits its use. (Hand book of industrial chemistry, Reigel et al, (2003)).

Soyabean oil is also used extensively in the manufacture of drying oil products. Crude soyabean oil of good quality has a lighter amber colour which upon alkali refining is reduced to the light yellow colour of most vegetable seed oils. Soyabean oil produced from green or immature beans may contain sufficient chlorophyll to have a greenish cast but this is not usually very evident until after the yellow red pigment of the oil have been bleached in hydrogenation (G.S Breck and S.C Bhatia, 2008).

The crude oil particularly that obtained by solvent extraction contains relatively large amount of non-glyceride materials consisting chiefly of phosphatide. They are removed by water washing during refining processes. The phosphatides removed by water washing are converted to soya lecithin. The free fatty acid content of good crude soyabean oil like that many other vegetable oil is slightly in excess of 0.5 percent. (Hand book of Industrial chemistry,Reigel et al (2003)).

1.2  BACKGROUND OF THE STUDY

Crude fats and oils are processed by general scheme shown below with modifications or exceptions for specific species.

Fig 1:1-Generation flow sheet for refining and processing fats and oils (according to G.S Breck and S.C Bhatia, 2008). 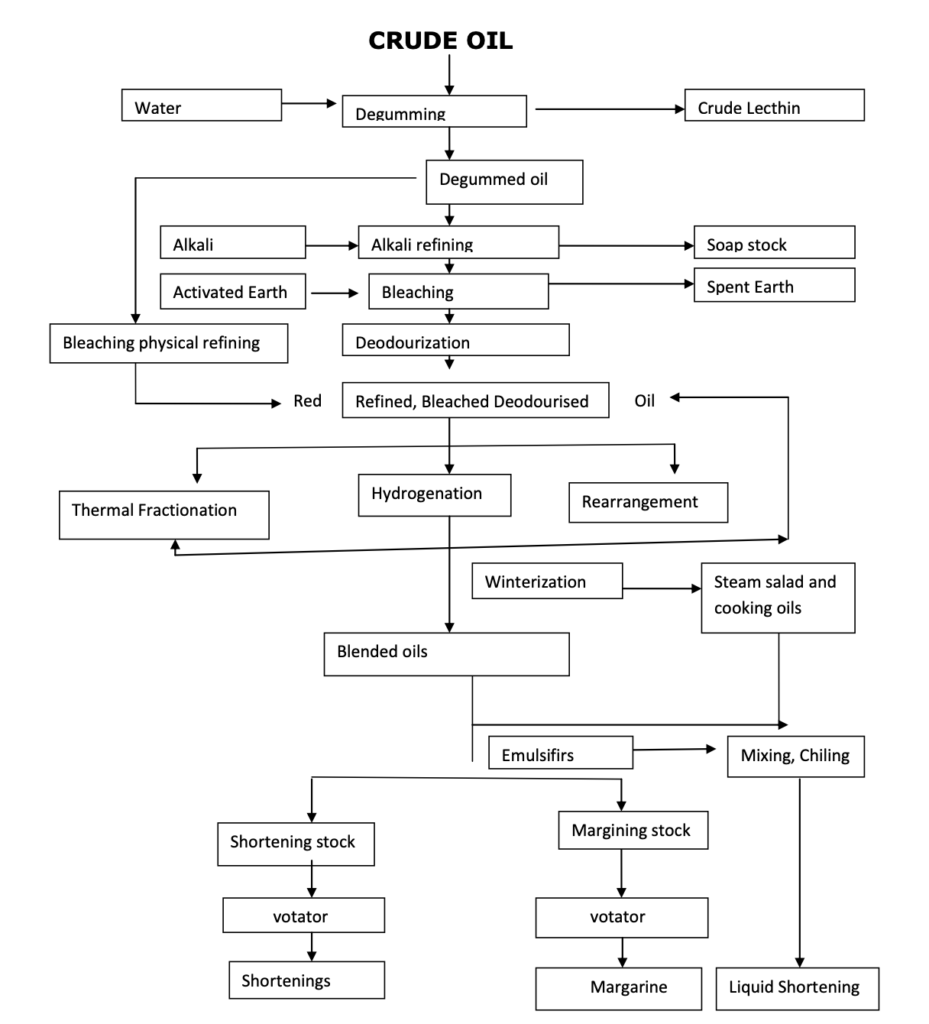 The phospholipids (Lecithins) must be removed to avoid darkening of the oil during high temperature deodourization and in deep-fat- frying applications. This removal typically is accomplished during the alkali refining process or in a separate water/acidic water degumming step before alkali refining. Crude soyabean oil has an unusually high (2-3.5 percent) phospholipid content among oils and often is degummed in a separate operation to not more than a 300 ppm level (as phosphorus) to avoid precipitation during shipping and storage. Refine soyabean oil contains 10ppm or less phospholipid. Degumming is achieved by mixing crude soyabean oil with water to hydrate the phospholipids and enable their removal by centrifuge. Critrics and other acids sometimes are added in a step called supper degumming to help remove phospholipids that are not hydrated by water. Degummed soyabean oil or crude oils of other species are neutralized with sodium hydroxide solution to from sodium salts of the fatty acids which are removed as soap stock by a continuous centrifuge. The soapstock also includes remaining phospholipids, some colour and flavor compound. (Hand book of industrial chemistry, Reigel et al (2003)).

The soap stock can be dried if refining is done adjacent to an extraction plant or acidified again to remove fatty acids and sold to the olechemical industry. The oil is then water washed and centrifuge one or two times to remove residual soaps. According to GS Breck and S.C Bhatia, a total degumming process for removing essentially all the phosphatide from soyabean oil using first an acid and then an alkali and two centrifuges has shown higher yields than conventional refining. This process however, does not remove prooxidant metals efficiently and for this reason has not found commercial acceptance in the united state.

G.S Breck and S.C Bhatia have stated that Dijkstra has described a novel process where the washing water is recycled to the oil feed and use to dilute concentrated alkali. This process does not generate an aqueous effluent and can be used for both acid and alkali refining, thus allowing refiners to change gradually from alkali refining to physical refining. Neutralization of soyabean oil with alkali solution assures elimination of free fatty acids without notable change in the phosphatide content.

The phosphatidic concentration obtained from oil previously neutralized in the miscella was of higher quality than the phosphatidic concentration obtained from the oil of the starting miscella. Aqueous ammonia has the advantage of being safe for the environment because the deacidification agent can be repeated or reused. Oils especially soyabean oil with low degree of oxidation can be fully deacidified only with the help of the ammonia. The same effect can frequently be achieved by a preliminary desliming with 5 percent formic or citric acid. Deodourization at 2100c of oils that have been deacidified with ammonia and washed with water yield bland and pale edible oils having good storability (G.S Breck and S.C Bhatia).

List and Erickson state that of all the unit processing operations, refining has the most significant effect on oil quality measured by colour, oxidative stability and storage properties. If soyabean oil is not properly refined, subsequent processing operation such as bleaching, hydrogenation and deodourization will be impared so that finished products will not fail to meet quality standards. Also, poor refining will reduce the yield of natural oil, thereby lowering manufacturing profits. (JAOCS, Vol.

According to G.S Breck and S.C Bhatia, caustic refining removes free fatty acid to 0.01-0.03percent level and remove virtually all the phosphatides. Crude soyabean oil contains trace amount (several part per million (ppm)) of prooxidant metals such as iron and copper. Caustic refining usually removes 90-95 percent of these metals. However, it should be emphasized that even though caustic refining reduces metallic contamination to low levels, residual iron and copper still remain strong prooxidants in refined oils and must be taken in to account during storage and handling. At a constant percentage of water, the total amount of caustic used influences colour removal ie the more caustic used, the lower the colour of the refined oil.

List and Erickson reported that plots of residual iron versus residual phosphorus content of deodourized oil showed that iron increases at phosphorus content below about 1ppm, reaches a constant value of about 2-20ppm phosphorus, then beings to increase. Thus, the decreased oxidative to stability at phosphorus content above 20ppm can be explained by the sufficiently high iron content (ie greater than 0.2 ppm) which exerts a strong prooxidant effect. Similarly, decreased stability at phosphorus content below 2ppm can also be explained because of the increased iron content. At the same time, it should also be pointed out that the traditional method for calculating the amount of refining lye is based on the free fatty acid content and therefore gives no indication of conditions leading to optimum phosphorus removal. Phosphatide content generally exceed that free fatty acids in crude soyabean oil by a factor of about 6. In refining process control, crude oil is usually educated for refining cost by the American oil chemist‟s society (AOCS) chromatographic method. (JAOCS, vol 60).

1.3 STATEMENT OF THE PROBLEM

The objective of refining and processing fats and oils include:

The crude oil extracted from soyabean needs further treatment to convert it to a bland, stable, nutrition products that is used to manufacture margarine, shortening, salad and cooking oil, mayoniaise, food products, Olechemicals.

This study entails the process of producing good quality oil through caustic/alkali refining process which is going to be compared with other good quality products in the market like grand product etc.