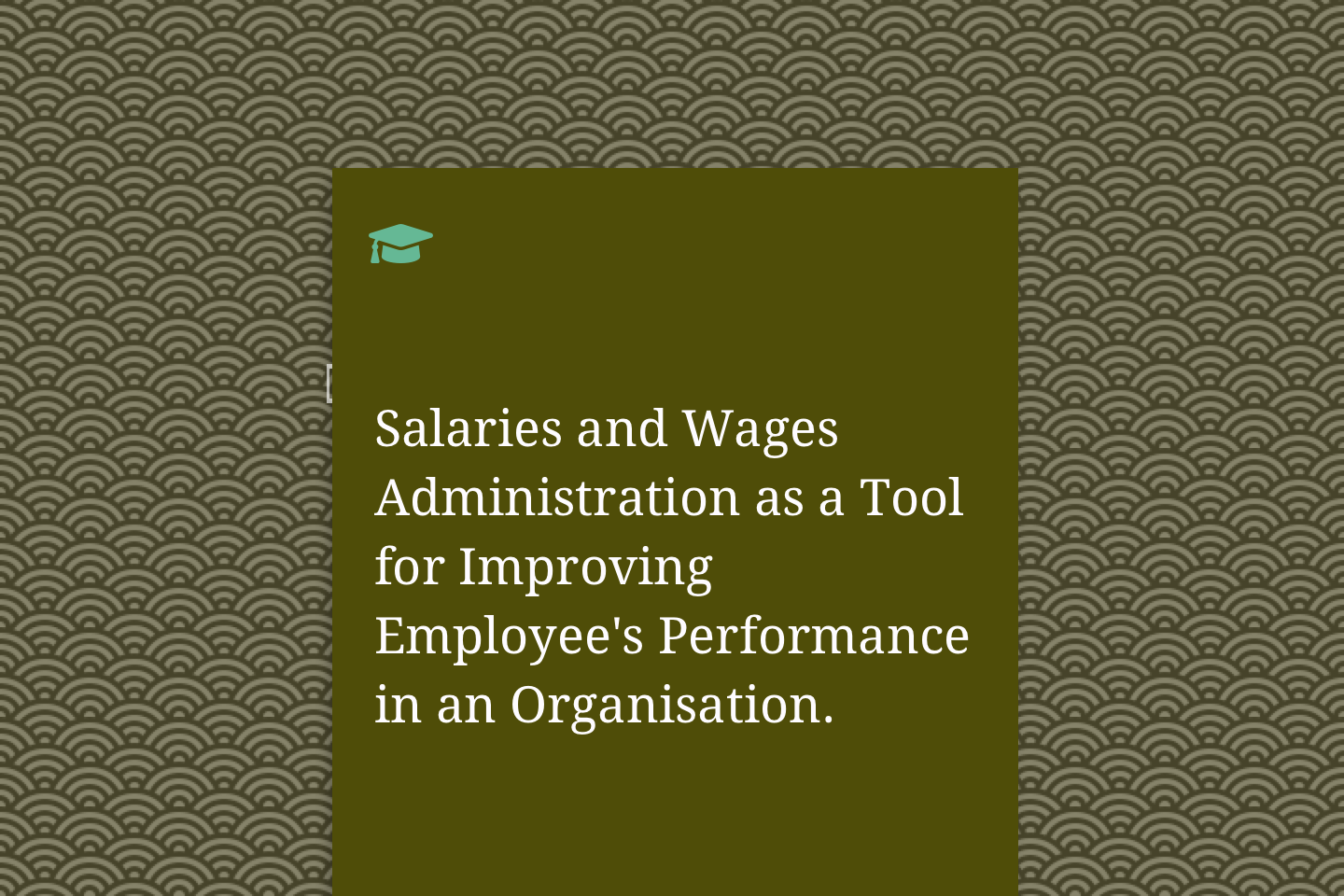 Salaries and Wages Administration as a Tool for Improving Employee’s Performance in an Organisation.

in Industrial Relations And Personnel Management

This work is concerned with salaries and wages administration in Nigeria public sector, a case study of Olamaboro Local Government Area of Kogi State. It is on this premise that the study is set to evaluate and highlight the significances of salaries and wages as factors towards achieving the aims and objectives of an organization. The employers of labour are aware of the fact that salary is also one way of motivating workers in an organization. The research design used in this study is descriptive research method. The sample used is 150 and the sampling technique simple random technique. The sources of data collection used in this research are personal interview, personal observation and the use of questionnaire. Method of data analysis used is Chi-square formular. Based on the analysis of data for the study, the following findings were pertinent. (1) That salary and wages administration is an essential part of any productive organization. (2) The researcher also found out that salary and wages improves the performances of the employee’s in an organization. The major conclusion of this study is that importance of salary and wages administration in an organization cannot be overemphasized. In view of the above, the following recommendation are. That the salary administration policy to be implemented across board so that all the level officers especially the junior cadre can have a sense of belonging. The promotion policy in the public services especially in Olamaboro local government be improved.

Organization is the most significant and integral point of administration. Without proper organization, administration is not possible. Thus organization is important to every administrative action. For no administrative action can be implemented without an organization. Therefore, no organization can exist without people or human resources to pilot its affairs. People or human resources have been identified as the core element in an organization.
The concept of organization has been variously defined, for instance, Waldo (1978) defined it as “the structure of authoritative and habitual personal interrelations in an administrative system”. Organisation has also been defined as “social units deliberately constructed and reconstructed to seek specific goals” (Quoted in Makae and Pitt. 1980).
Gulick (1937) defines organization as a formal structure of authority through which work sub-divided are arranged, defined and coordinated for the designated objective or goal. As it were, individuals who created an organization in order to achieve some specific aims and objectives in turn, the organization attract individuals who wish to become members for the purpose of their own need for money, interest status and symbols.
Organization is said to be a holistic of both human, capital and material resources with the aim of putting their resources together to meet goals and objectives. Ideally an organization should seek to accomplish all its set objectives. However, salary is one of the first and basic fundamental human needs. This is because the immediate problems confronting a school graduate or a new applicant is how to secure a good job so that he can earn a living. Therefore, salary administration, means a method and process that any organization uses for compensating their workers for service rendered. Salary is also a process of determining monetary reward for service rendered by the employees to an organization. In a nutshell, salaries and wages administration is the establishment and implementation of sound policies and method of employee’s compensation.
On productivity, the need for productivity improvement exists virtually in all countries of the world whether developed or developing countries like Nigeria etc. The primary reason for this, is precisely because of increased productivity and performance and economic growth. Consequently, industrial development effort will come to naught unless a nation’s productivity also improves in the developing countries. It is generally accepted that salaries and wages have to bear some relationship to productivity. The theory is that wages cannot diverge significantly from productivity without causing either inflation or unemployment. The implication is that a dynamic economy with full employment and no inflation might be an achievement in the performance of the organization.

The usually enhanced remuneration paid to the civil servants, have been rendered inadequate by the high rates of inflation pervading the economy over the years. The civil and public services have witnessed a lot of neglect which has led to a drop in salary and wages and efficiency of both civil and public servants. In response to this, study in the public and civil services, the employers of labour (government and private enterprises) introduce the method and process of compensating their employees through what is called salaries and wages administration. Though, employers will impact positively on the employees morale and subsequently induce their performance. This work is set to solve the problems of salaries and wages and performances in an organization. This will go a long way in improving their performance and hence lead to higher productivity. Promotion policy should be awarded as at when due. From the analysis above, it shows that if workers’ salaries and wages are equitable it will enhance the performance of the employees. The problems of salaries and wages not paid as at when due, salaries and wages increment etc need to be solved through good salaries and wages policy. There should be no delay on annual leave, maternity leave, transport allowance, housing allowances, and medical allowances.

1.3 SIGNIFICANCE OF THE STUDY

Salaries and wages administration is one of the newest personnel challenges in modern organization. This study hopes to provide a comprehensive document that would discuss salaries and wages administration in Nigeria and its impact on performance in an organization. The research work is of a great importance to the employers and employees in the following ways:
The employees and the employers are the beneficiaries of this study because when employees are well paid, they tend to work well by so doing, the organization is increasing their productivity because the employees are committed to their work.

The scope of the study is limited to Olamaboro Local Government Area of Kogi State. In understanding a research work, its scope is normally defined with respect to a geographical and time dimension. The fixing of such boundaries is usually resorted to due to the problems posed by the administration of a large data. This study therefore, conforms to enhance the salaries and wages of the worker within the organization to increase their performance.

1.5 LIMITATIONS OF THE STUDY

The obvious limitations of time, finance and materials such as textbooks and other resources on the researcher makes it absolutely impossible to embark on such comprehensive study that will cover the comparative study of the whole local government in the state. Hence, the limitation has necessitated the choice of a case study which is Olamaboro local government area.
Hence, the choice local government as a case study is not arbitrarily embarked upon by the researcher. It was expected that the study would serve as a representation of a state from whose inductive research finding would be of general application. The researcher hopes that other scholars interested in salaries and wages administration will undertake a more comprehensive study to cover the entire state in the future. Therefore, wages are regularly, hourly or weekly payment made or received by workers for services rendered by an employer. Hence, both salaries and wages are payment for labour service.

The following research questions are posed to aid the researcher in the study.

1.8 OBJECTIVES OF THE STUDY

It is one thing to be blessed with abundant human resources and another to manage these resources to achieve stated objectives. No organization can hope to move or improve positively without the effort of her workers and as such sound salaries or wages is a sine qua non for improved performance of workers. They contributed in no small way towards improved performance in the organization.
Therefore, this study among other things is aimed at achieving the following objectives:

(1) SALARY: a major responsibility of an organization is to make sure that its workers’ salaries are paid as at when due. The organization has to be certain that salaries paid can satisfy the basic physiological and safety needs of their employees, which when satisfied, one can expect them to put their best effort in order to achieve the organizational objectives. Therefore, salary refers to a fixed regular payment usually made every month or annually to the employees of an organization concerned. Salary could be an agreed amount of money between the employer and the employee to be paid at the end of every month in respect of the services to be rendered. Salaries are compensation paid based on an annual rate of pay, though it is usually paid monthly irrespective of the number of hours worked.
(2) WAGES: It is the reward that individual receives from an organization in exchange of his labour. People who work in an organization are engaged in an exchange relationship. The employees exchange the labour for financial rewards. To the employer, the most important oblication he owes his employees is their wages. Wages are compensation paid on hourly, daily or weekly basis. It is usually paid to labourer, part time workers etc. workers are paid based on the number of hours worked and not actually on the amount of work done. Therefore, wages are regularly or usually hourly, daily etc payment made or received for work or services rendered by an employee. However, both salaries and wages are payment for labour or services rendered.
(3) ADMINISTRATION: There is no universality in defining administration. Administration is inevitable because where policies or decision are made, they must be applied. According to Augustus Adebayo, administration is the organization and direction of resources both human and material for the accomplishment of specific goal. Individual now tend to define administration from their personal.
(4) FRINGE BENEFIT: This is an extra amount paid to employees to better their working conditions, it is inform of rent supplements, transport allowances, etc. It gives employee a desirable working conditions and it satisfies their needs.

Theoretical framework is defined as a theoretical mirror or pillar upon which research works are seen or built. The importance of it cannot be over emphasized. According to Obasi (1999:9) it is a device or scheme for adopting or applying the assumption, a theoretical framework is a way of describing, analyzing and interpreting and predicting phenomena. It involves linking problems under investigation to assumptions, postulation and principles of a theory. It has the potentiality to provide the significance or rationale of a study. Therefore it provides the overall background of the research. The theoretical framework of this study is based on Abraham Maslow hierarchy of needs theory (1965).
Psychological Needs: These include body’s automatic efforts to certain normal functioning such as satisfaction or hunger and thirst. The need for air and shelter also the need for sleep, sensory pleasures activity and arguable sexual desire. People concentrate on satisfying these needs before turning to higher order needs.
Safety Needs: These include safety and security freedom from pain or threat of physical attack, protection from danger or deprivation, the need for orderliness.
Love Needs: These include affection, sense of belonging, social activities, and both the giving and receiving of love.
Esteem Needs: These include both self respect and the esteem of other self respect involving the desire for confidence, strength, independence and freedom and achieving of esteem of other involves reputation or prestige, status, recognition and attention.
Self Actualization: This is the development and realization of one’s potential.

Role of Management in Motivating Workers in the Banking Sector