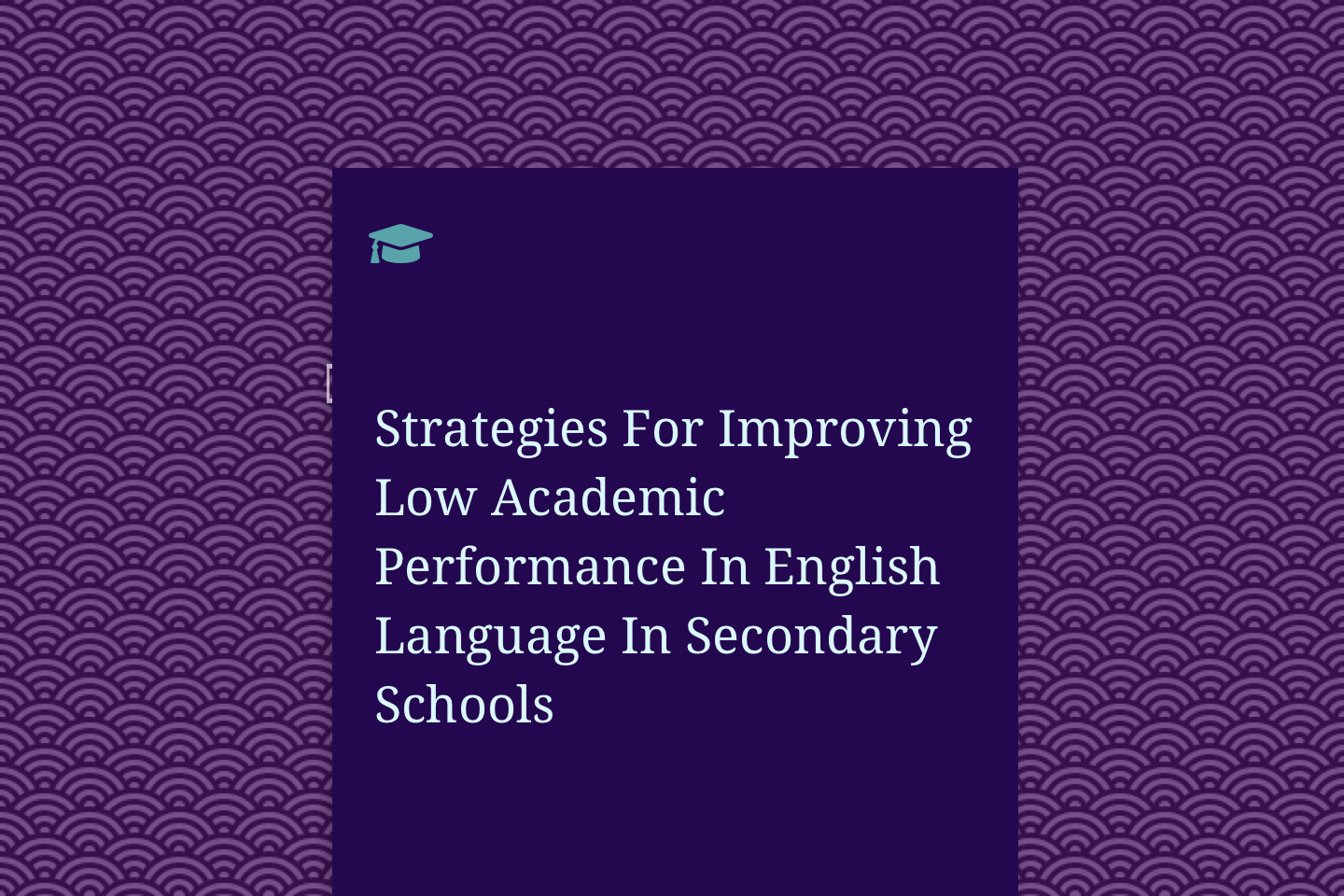 It is therefore necessary that English language is thought properly in every educational institutions. Ferma (2003) was of the view that “a person is functionally literate when he acquired the knowledge and skill in reading and writing which enables him to engage effectively in all those activities in which literacy is normally assumed in his culture of group”.

However it is disheartening to note that the poor performance of students in English language in secondary schools is still persistent. English is the language used in teaching the students, a student having faulty foundation in English will find it difficult to cope with other subjects since level of comprehension becomes difficult if not impossible. Oluwole (2008) was of the view that “having difficulty in grasping fully the contents and concepts of the various subjects of the curriculum taught in target language seem to be one of the problems that English as a first language students face in their particular course of study”.

Education is one of the most important aspect of human life especially in this modern era where educational qualification obtained is inquired of when been considered for a job by employers. The educational system of Nigeria have been in crisis for many years ranging from the problem of presence of unqualified teachers in the educational system to the problem of lack of infrastructural facilities, negative attitude of students towards learning is also a major cause.  Though (2011) states that some students buys book but do not make effective use of the book.

Government of Nigeria have tried in various ways to improve the quality of education in the country by introducing various policies such as the Nigeria “National Policy on Education” published in 1997, revised in 1981 and 1990. The policy had been revised to ensure that the educational sector is supportive of government development goals. Recent initiatives have also been taken by the government in the funding of education. The FGN/ODA Nigeria Community Education Programmes introduced in 1996. One of the objective of this initiatives are to restructure educational funding arrangement. Alternative sources of funding education have been explored. In 1995 the government established the Education Tax Fund.

Another notable change has been the effort to update the curriculum, a committee for the improvement of the curriculum was also established. The overall responsibility of the Federal Ministry of Education is to ensure quality within the system, to encourage and initiate innovations and to ensure the schools maintain minimum standards of acceptable educational practice. The National Commission for Colleges of Education was established in 1990 to lay down minimum standards for all programmes of teacher education.

In Nigeria, many secondary schools have been deficient in their operations and the overall effectiveness due to problems of teachers and students. Also the problem of not adequately equipped with English language. This problem is pertinent to both the public and private educational institutions. While the public educational sector is faced with the problem of mismanagement, you find several private schools below standard right from the primary to the tertiary.

Every country endeavours to provide quality education for its people, the future of such nation depends largely on it. The educational system of Nigeria is still faced with a lot of problems. Some of the problems include student learning skills, parental background, peer influence, teachers’ quality, learning infrastructure among others. The educational sector is responsible for performing several vital works in any economy. The various experts of various fields have to pass through the educational system to become one.

English proficiency is an essential factor in educational achievement. It is discouraging to note that Nigeria students still perform poorly in English language. This is so much so in secondary schools of the country. Although, for some time now it appears government have tried various methods in resolving the issue low academic performance in English language in secondary schools.

It is against this background that the researcher considered the study of strategies for improving low academic performance in English language in secondary schools.

The aim of this study was to investigate the strategies for improving low academic performance in English language in secondary schools. The specific objectives are to:

This study will be of utmost importance to investors, government and the researchers because it will provide policy recommendations to the various Nigeria stakeholders taking adequate measures in educational sector.  It is hoped that the exploration of secondary schools will provide a broad view of the operations of the educational system to investors and government. It will contribute to existing literature on the subject matter by investigating empirically the role of English language in academic successes. This study will be of benefit to;

Government: this study will reveal to the government happenings in the educational sector. Formulation and implementation of policies based on this findings would ensure development in the sector.

This study at the end will enlighten the board of educational sector on the implication of English language.