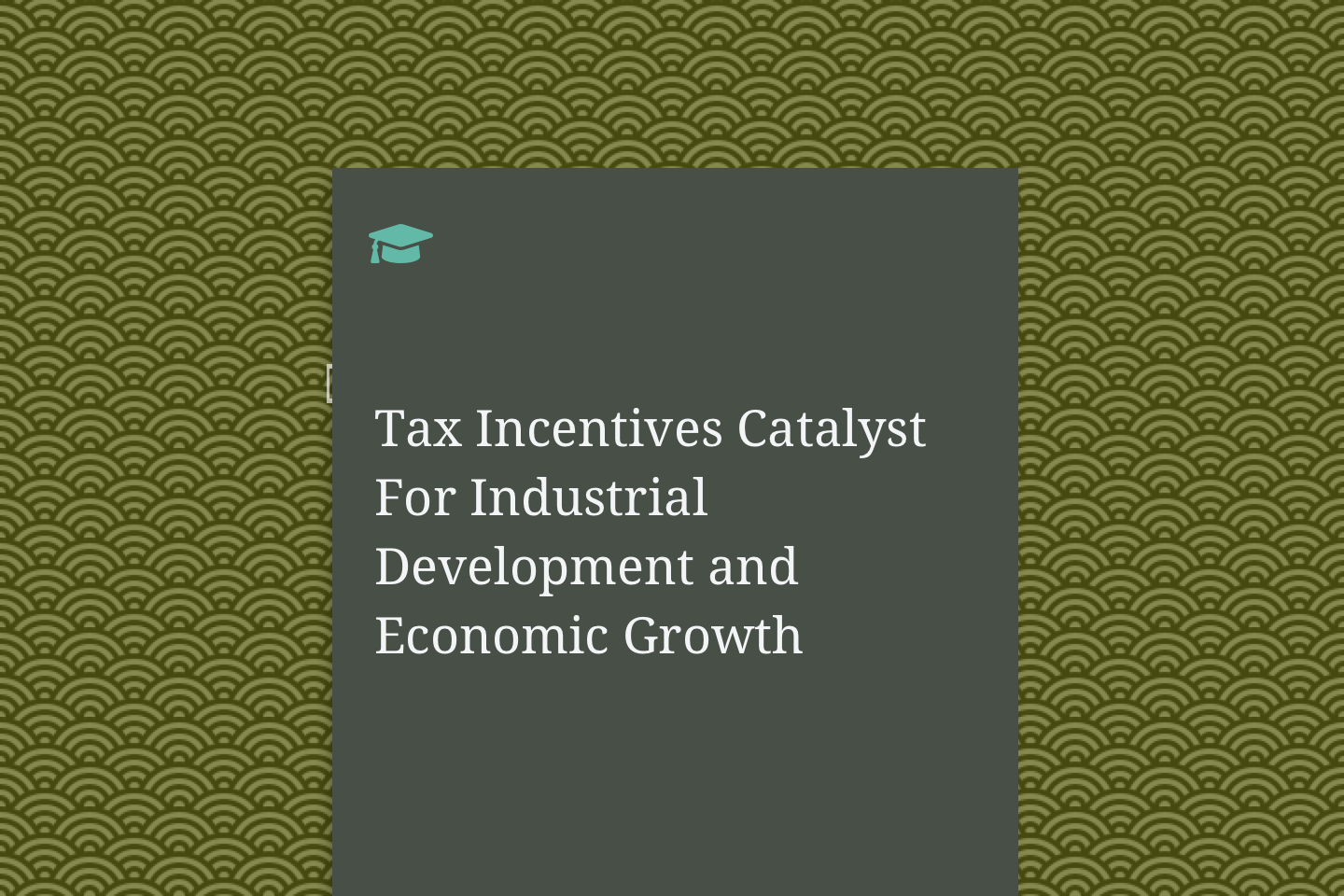 Tax studies have become increasingly sophisticated especially during the past decade and have yielded conflicting results as regards the tax matter. Some studies focus on the cost and benefit of tax incentives while a few look at whether public funds could have been better spent or if tax incentives were economically justified. Tax studies offer little guidance to policy makers who are concerned about tax rates or tax offerings and the effectiveness of employing tax incentives as an economic and developmental tool.

The mode by which industrial development and economic growth can be effectively, efficiently, stimulated and developed is very demanding. As a result of this, the government charges less tax and gives tax holidays in order to encourage investments and economic activities in those areas which help to improve production capabilities, activate economic growth as well as the allocation of resources in a socially desirable manner.

Investors often emphasize on the relative importance of a good tax system in investment decisions compared with other considerations such as political and economic stability, availability of social infrastructure, security of the life and property and also the general cost of doing business and so on. To the prospective investor, the general feature of a tax system (tax base rate) is more important than the tax incentives in many developing countries. The tax laws are not clearly written and may be subject to frequent review which makes long-term planning difficult for businesses and add to the perceived risks of undertaking major capital intensive projects.

Tax incentive itself, is the use of government spending and tax policies to influence the level of national income. This measure encourages the springing up and gradual growth of new enterprises by the reduction of profit tax, which in turn encourages production, influences the production level and curbs unemployment. So, the government should provide such tax incentives in order to boost development which will bring about an increase in employment opportunities and also cause an improvement in the economy.

Amadiegwu (2008:74), a tax expert wrote that the objective of tax incentive is that by borrowing rather than taxing, the government has a better chance of expanding investment spending which is essential in enlarging production possibilities and attaining a sustainable improvement in the standard of living of the people.

Dotun and Sanni (2009:265), in their Nigerian companies taxation stated that these incentives can be targeted on the low income earners, local and developing industries, farmers, which will increase their savings and is necessary for higher investment. Tax incentives create employment opportunities for the people, helps to fight economic depression and inflation thereby increasing the equitable distribution of income and wealth.

A good economic development policy should contain the following elements.

An economic development policy should define the type of incentives

and the extent to which the government will use them. For example, the government may decide to grant an entitlement to any firm that meets the minimum required qualification or may choose to provide incentives based on the assessment of individual firms. Government may also establish maximum funding for a particular process.

A clearly defined evaluation process should be outlined in an economic development policy for the purpose of consultancy and transparency which include.

How  the  purpose  of  the  tax  incentive  measures  up  to  establish development criteria.

A cost benefit analysis An evaluation of a tax based impact both in terms of increase in taxable value.

Economic and industrial development incentives Act (2008) both financial and non-financial include a broad range of tools ranging from expected planning processes to direct or indirect funding. Government often use these incentives to pursue specific economic goals such as tax base diversification, job creation, business retention, and expansion that are usually set by the government which consists of both the federal, state and local practice. The use of financial incentives to benefit private parties introduces risk factors which are not generally present in other public financial management areas. For this reason, economic incentives must be based on a policy that establishes parameters for their appropriation in relation to the economic developmental goals of the government.

Empirical studies have shown different views on tax incentives as a catalyst for economic growth and industrial development. A school of thought believes that a tax incentive encourages economic growth and industrial development while another believes that it reduces revenue accruable to the government. As a result of this, it does not stimulate the economy. The poverty alleviation programme aimed at reducing the rate of poverty among the masses, was introduced. This programme covered the provision of jobs for able and unemployed youths, provision of loans for small and medium scale enterprises at a minimum lending rate. With all these measures and policies taken so far, the economy has not shown any

appreciable progress and Nigeria still remains one of the developing nations of the world. Given this gap, this study seeks to examine the nature of tax incentives that are extended to deserving companies and the interaction that exists between the tax incentives and the company.

PURPOSE OF THE STUDY

Tax incentive is a strong fiscal measure or policy which can stimulate investment and savings leading to capital formation thereby enhancing industrial growth and economic development. This capital acquisition can be used positively in economic and industrial development of companies and could be of individual effective usage in self development. In deciding if these incentives can stimulate the companies and individuals to invest in the economy, one basic fact to be checked is if the company or industry concerned decided to go into business because of the incentive offered.

For this purpose, the researcher intends to examine the criteria for deserving tax incentives, unfold how the industries and firms have been responding to the provision of the incentives scheme, assess the implication of the tax incentives, ascertain how these incentives have been stimulating and motivating these bodies to establish industries and firms which will in turn create employment opportunities thereby stimulating industrial development and economic growth.

Furthermore, the researcher intends to examine how this scheme has helped existing industries and firms in expanding their areas of operation in Portharcourt, Rivers State

Tax incentive scheme is an economic policy which exists among other competing alternatives. The scheme may be an inducement towards rightful investment and securing a proposal on private investors. This means that if the scheme achieves its aim of implementation, then, the benefits expected from these incentives should be able to justify the cost with the following results/benefits:

It is the intention of the researcher to look into ways and the extent to which the existing tax incentives are being used by the entrepreneurs, in setting up industries and establishments which aids industrial development and economic growth.

This study covers the tax incentives as a catalyst for industrial development and economic growth. The research study will be limited to the use of questionnaires and oral interviews when appropriate and to a review of related literature (review of relevant books and journals) that could provide an insight into the impact of tax incentives on industrial development and economic growth. Data collection will be restricted to four industries and firms in Port Harcourt, Rivers State which are Nest Oil Ltd, Abuloma, Paboard Breweries Nigeria Ltd, Rumumasi, Amsale Engineering Ltd., Trans-Amadi, and Hallmark Mills Ltd Rumu-Kwurushi all in Portharcourt, Rivers State.

LIMITATION OF THE STUDY

The constraints of this study may be attributed to:

Three hypothesis were formulated as shown below:

Ho:    The tax incentives granted by the government to industries and firms is not considered as an economic booster.

Hi:        The tax incentives granted by the government to industries and firms is considered as an economic booster

Ho:    Tax incentives cannot be used to off-set other disadvantage that investors may face.

Hi:        Tax incentives may be used to off-set other disadvantage that investors may face.

The Impact of Tax Incentives on Industrial Growth and Economic Development (2012). Retrieved May 4 2012 form http://ww.taxplicycenter.org.

A Comparative Study Of Expenditure Control Methods In Government And Privately Owned Hospitals.