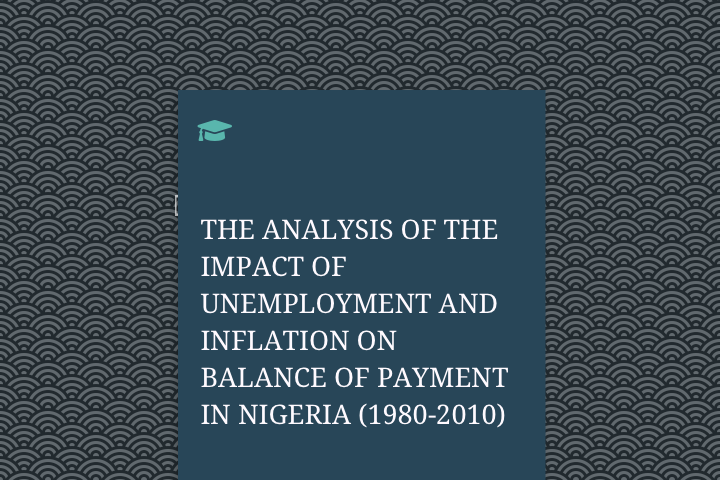 Practically, inflation which is a persistence increase in general price level is one of the macro-economic problems facing Nigeria today. According to Ewa Udu and Agu G.A it began in Nigeria during and after the Nigeria civil war (that is from 1965-1970).Before the war, there was noticeable increase in the price of so many commodities such as a bag of 50cups of rice that cast N14.00 rises to N43.00 immediately after the civil war in 1970. Also there was an increase in the price of other goods and since 1979 the rate of inflation in Nigeria has been increasing.

Again, the Nigeria civil war (that is secessionist Biafra) was faced with hyperinflation. During that time everything was scarce relative to demand. This is because there was excess supply of money by the federal government in attempt to persecute the war with few available goods. More so inflation has been a scarce of concern to the government and something that was to be abided absolutely at any cost, because it is one of the worst imaginable social evil in a society.
However, there have been observed period of unemployment in Nigeria until 1930’s when the classical economist theory which propound that the demand for labor will also be equal to the supply of the labour at the prevailing money wage rate, as this theory collapsed, due to the depression of the 1930’s government has lend to accept periods of unemployment as inevitable. Since independence in 1960 and in mid of 1980’s unemployment have been viewed as one of the most untreatable problem facing the Nigeria economy up till today. It assumes alarming dimension with the emergence of graduate unemployment. As a result of this, the government has made many attempts at achieving full employment through their various policies.

Nigeria economy has undergone strains and stresses in their balance of payment since the collapse of the oil boom in early 1980’s. During that time, Nigeria export was mainly crude oil which grew steadily from 1975 and reached a peak in 1980, the import grew faster, bringing about a growth deficit in the visible trade balance. Also the production and consumption patterns that emerged from, the era of the oil boom could not be sustained in the face of declining export or foreign exchange and inflation resulted from the heavy borrowing by the civilian administration, this made the balance of payment, capital account balance to reduce to degree of deficit which leads to low external reserve. Furthermore inflation is generally used to describe a situation of rapid persistence and unacceptable increase in general price level in any economy which brings about decrease in the value of currency.

Also Lerner (1949: pg 27) describe inflation as an excess of demand over supply. Again Solow (1970) sees inflation as going on when one needs more and more money to buy some representative bundle of goods and services meaning that inflation is a part of the adjustment process between two equilibrium. However it is not every rise in price that is being regarded as inflation but a persistent rise in aggregate price of goods and services; this is because price may be rise to support a higher level of aggregate welfare.

The main reason for allowing inflation is because it allows for substantial redistribution of income and wealth from savers to borrowers that is from those who cannot protect themselves from the rise in the price of what they buy by raising the price of what they sell to those who can afford. High inflation hamper growth and development of an economy as it discourage savings and investment.

Meanwhile, the dynamic feature of unemployment has several factors being temporal or chronic in nature. A person is said to be unemployed when he or she is able and willing to work and is available for work (the person is actively searching for employment) but does not have work. There are so many types of unemployment which are functional unemployment which result from normal turnover of labour , a structural unemployment refers to unemployment rising because there is a mismatch of skills and job opportunities when the pattern of demand and production changes, mass unemployment is the most serious type of unemployment. Since it occurs because of general deficiency in demand and equally affects every sector of the economy. We are concerned about unemployment for many reasons firstly; unemployment generally reduces output and aggregate income. Increase inequality since the unemployed lose more than the employed. Secondly it makes the unemployed ones sometime feel as if the society does not need them. This therefore, causes misery, social unrest and hopelessness. There are so many causes of unemployment such as demographic factors, low rate of industrialization strategy and the minimum role of the government.

The balance of payment is a record of all economic transaction involving payment and receipt between the residents of one country and the residents of other countries of the world in any period usually in one calendar year. Specifically the balance of payment records the import of goods and services, income transfer as well as changes in country liabilities to claim assets on the rest of the world. It is a flow not a stock concept and involves more than payment, that is transaction that are not paid in cash and kind, deferment of debt, services payment due to unremitting profits among others. Exceptional financial items means those transactions that finance balance of payment needs or are undertaken to bridge the gaps in the balance of payment. As a result of the importation of crude oil in the economy, Nigeria balance of payment is divided into oil and non-oil sectors. The oil sector is the most significant components of the economy and the largest foreign earner.
In assessing the cost of inflation distinguish between perfectly anticipated inflation which occurs when the rate of inflation is expected and has been taken into economic transaction that is the exchange rate will be adjusted tp eliminate any adverse effects of inflation on the balance of payment. For instance, ’’if Nigeria inflation rate is above that of her competition the value on naira would depreciate quickly to restore price competitiveness, but in reality exchange rate do not adjusted perfectly anticipated inflation rate means unexpected inflation.

In the recent years there has been emphasis laid pertaining to the relationship between inflation and unemployment. According to Milton Friedman, high inflation increase unemployment in several ways:

Inflation, unemployment and maintenance of stable balance of payment are all basic macro-economic problems facing every government in the world today. Inflation causes uncertainty about future prices, thereby affecting the decision on expenditure, savings and investment and causes misallocation of resources. High inflation equally boosts growth and development policies of the policy makers. Our concern on unemployment is based on the fact that high unemployment leads to loss of output and reduction in aggregate income, it increases inequality since the unemployed loose more than the employed. Prolonged unemployment can cause misery, social unrest, loss of confidence and hopelessness for the unemployed; more so unemployment usually unwanted by the unemployed.

Nigeria’s balance of payment have continued to show deteriorating trends. The cause of this deterioration includes, the import syndrome, mounting external indebtedness, hostile international environment, over dependence on crude petroleum etc, there is a link among these variables, which after time leave government confused and defected. This is because low unemployment is associated with a rapid rate of inflation; similarly high unemployment implies self-labor markets and consequent inability to push up wages. Consumers income and spending and also depressed and demand condition for rapid inflation are therefore unfavorable. Therefore, there is a tradeoff between the rate of inflation and unemployment. Price stability can only occur at the cost of high unemployment rate and low unemployment rate can only occur at the cost of inflation.

However, the Nigerian economy does not reflect this so called tradeoff. This is because experience has shown that rising inflation also leads to unemployment rate increase, despite the monetary and physical policies by the authoritative in Nigeria.

The objective of the study; “an empirical analysis of the link between inflation, unemployment and balance of payment in Nigeria” includes the following:

1.4 HYPOTHESIS OF THE STUDY

This hypothesis is formulated to acquire necessary information and basic assumption of the study. Hypotheses are formulated in two forms namely:
I. Null hypothesis (Ho): Is a hypothesis which states a no difference or no relationship exists between two or more variable. It also states a negative direction.
II. Alternative hypothesis (Hi): It specifies any of the possible conditions not anticipated in the null hypothesis and it also states the positive direction.
Ho: Inflation and unemployment have no effect on balance of payment in Nigeria.
Hi: Inflation and unemployment have an effect on balance of payment in Nigeria.

The study is significant in many ways:
i. It will bring into live light the salient features of the issues being discussed.
ii. The study will aid the police makers in Nigeria in terms of management policies to curb inflation, reduce unemployment especially among the youths etc.
iii. The study will underscore some of inadequacies of the authorities in their quest to solve the macro-economic problems and thus providing a spring board for better decision.

The study was carried out in Nigeria to establish the import between inflation and unemployment on balance of payment. The scope of the study covers from 1980-2010.However in the study of this nature there is usually a possibility of encountering certain difficulties which eventually act as constraints to the validity of conclusion arrived at. These difficulties did not discourage the researcher as the challenges were boldly faced. The limitation to the study includes: the financial difficulties in an effort to have a sufficient research materials to be able to write extensively on the subject matter, the researcher was faced with some financial predicament considering high cost of not only education materials coupled with the high transport fare. Again time factor, the research work was conducted simultaneously with normal academic work within a short period of time in which some valuable information could be obtained.