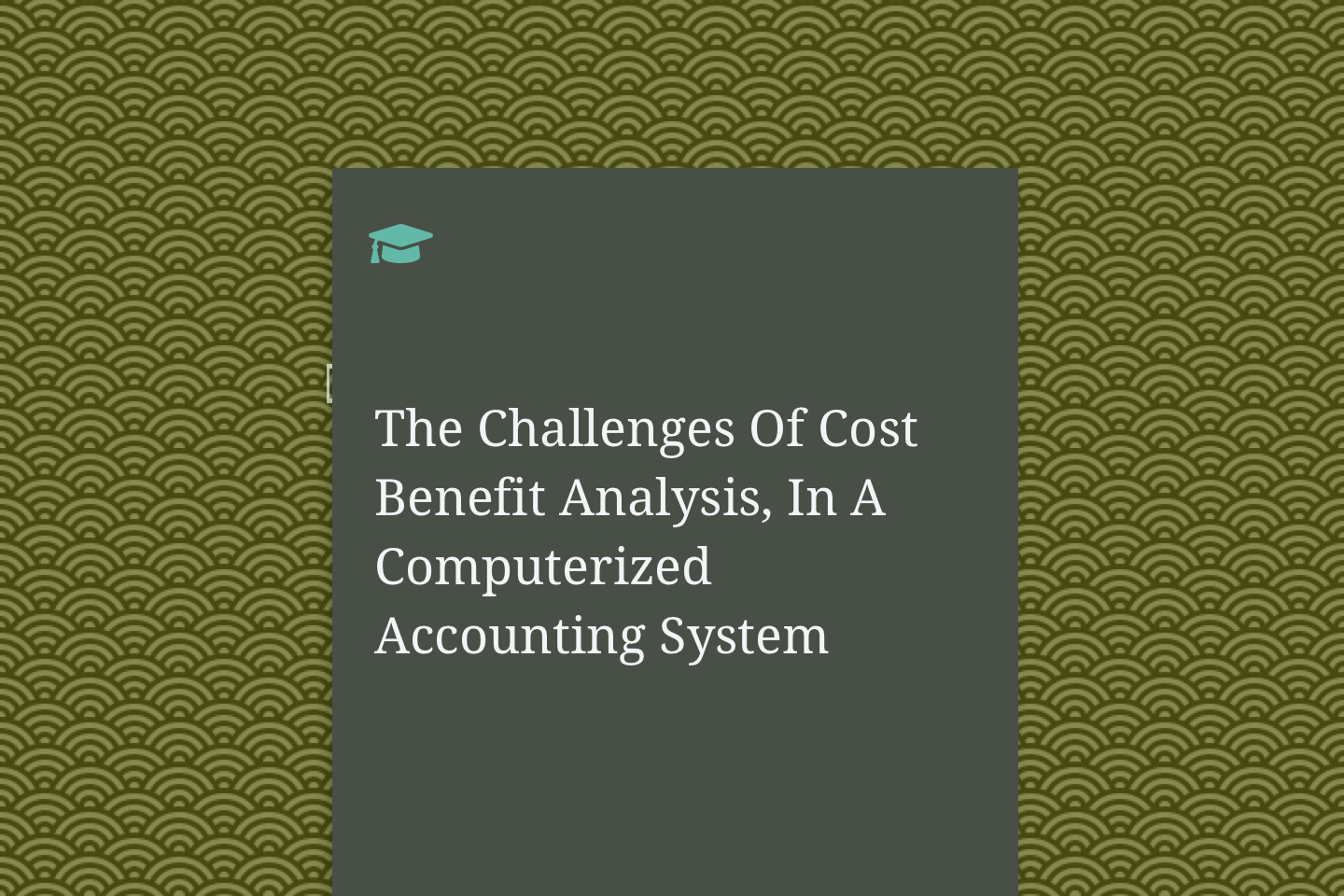 The Challenges Of Cost Benefit Analysis, In A Computerized Accounting System

This research is on the challenges of cost benefit analysis in a computerized Accounting System. The purpose of this study is to enquire into the viability or other wise of computerized accounting Systems, with particularly reference to coca-cola Bottling Company, Enugu. The objective of the study is to ascertain if the introduction computer system may lead to industrial unrests as workers resists change. Also, the method used in this study is chi-square while the findings in the process of this research work is the implementation of computerization of coca-cola bottling Plc Enugu and also the recommendation for the work is that the company should motivate its personnel more on the use of computers.

Computer has been defined as electronic machine that accept data (input) processes it to produce useful result (output). It is also capable of storing information. It uses predefined instruction known as computer programs to execute the task in order to produce output. Computers technology has helped in no small measure in activating the problems encountered using the manual tools and machines. Computerization ranks prominently in the commanding heights of economic activities of the business world. Through computerization, industries have been able to control their cost of production heading to high profit margin, sustainable growth and development, accurate and lasting records.

The manufacturing industry has come a long way from the manual era of machine operation to modern day science and technology. Within this period, a number of major changes took place in the business world with significant positive impact on the business world. Notable among these changes are those changes in manipulation of accounting records, fantastic computer designs etc.

We have various types and categories of computers which perform diverse functions; however, the one of interest and relevance to this research is the digital type of computer.

The history of the digital computer data back to the Abacus which was intended in China more than a thousand years ago and used to add, subtract, multiply and divided . This was followed by the counting invented by John Napier in the 1600’s. Blaise Pascal followed closely with a mechanical machine that could do similar jobs more efficiently. GOH friend Von Liebritz invented a more improved version of Pascal’s machine. Other great mathematicians and investors like Jacuard, Babbage, Grace Hopper etc made greater strides towards, building calculating machines. An American Herman Hoterrith, developed the mechanical members calculator which was used to read punched cards and greatly facilitated the sun of 1890 in that country. Hoterrith founded a company to sell his inventions and today that company has grown to become IBM which is (international Business machines) the largest computer company in the world.

The era of modern computers began sometime in the period preceding the end of the Second World War when the vast calculations required in the production of the first bomb necessitated he buildings of a giant computer which operated on vacuum tubes. This computer was huge and expensive and only affordable by few.

Thus, from this period on wards, with the introduction of new technologies, computer became smaller in size and cheap as well: such that today we have the micro computer which costs a few thousand naira and can do job undreamed of forty years back.

There are three classes of computers now in use viz;

In the past thirty year or so, there has been a tremendous advance in technology of automation. The introduction and adaptation of the computer to business has led to revolutionary changes in data processing methods in advanced countries.

Companies are begin attracted to this computerization possibly with the belief that it is sound business to sight coupled with the feeling that it is in vogue for a company to say it is fully computerized.

In answering the question why any organization should consider the transition to computerized accounting system Larry J. Campbel (1979) observes that research by behavioral scientists reveal that he fundamental reasons for transferring to some form of mechanization in information systems are the same as any other tact of an enterprise. Companies turn to mechanization because.

1.2 STATEMENTS OF THE PROBLEM

The problem of this study includes:

1.3 STATEMENT OF THE OBJECTIVE

The followings are the research questions

These are problems that put together all the concepts construct, and variables and give the researchers a clear view of the problem under study. That is, they are prepositions put forward by a researcher to enable him or her solve the problem(s) formulated and to achieve the objectives of the research exercise.

The following research, hypothesis are used where

Ho: Here is no programme of computer training skills and acquisition.

Hi: There is programme on computer training skills and acquisition.

Ho: Computerized accounting system has no impact on the staff of coca-kola bottling company Enugu.

Ho: The staffs of coco-kola bottling company does not benefit from the cost of using computerized accounting system.

1.8 LIMITATIONS OF THE STUDY

Effect Of Misrepresentation Of Information In A Financial Statement