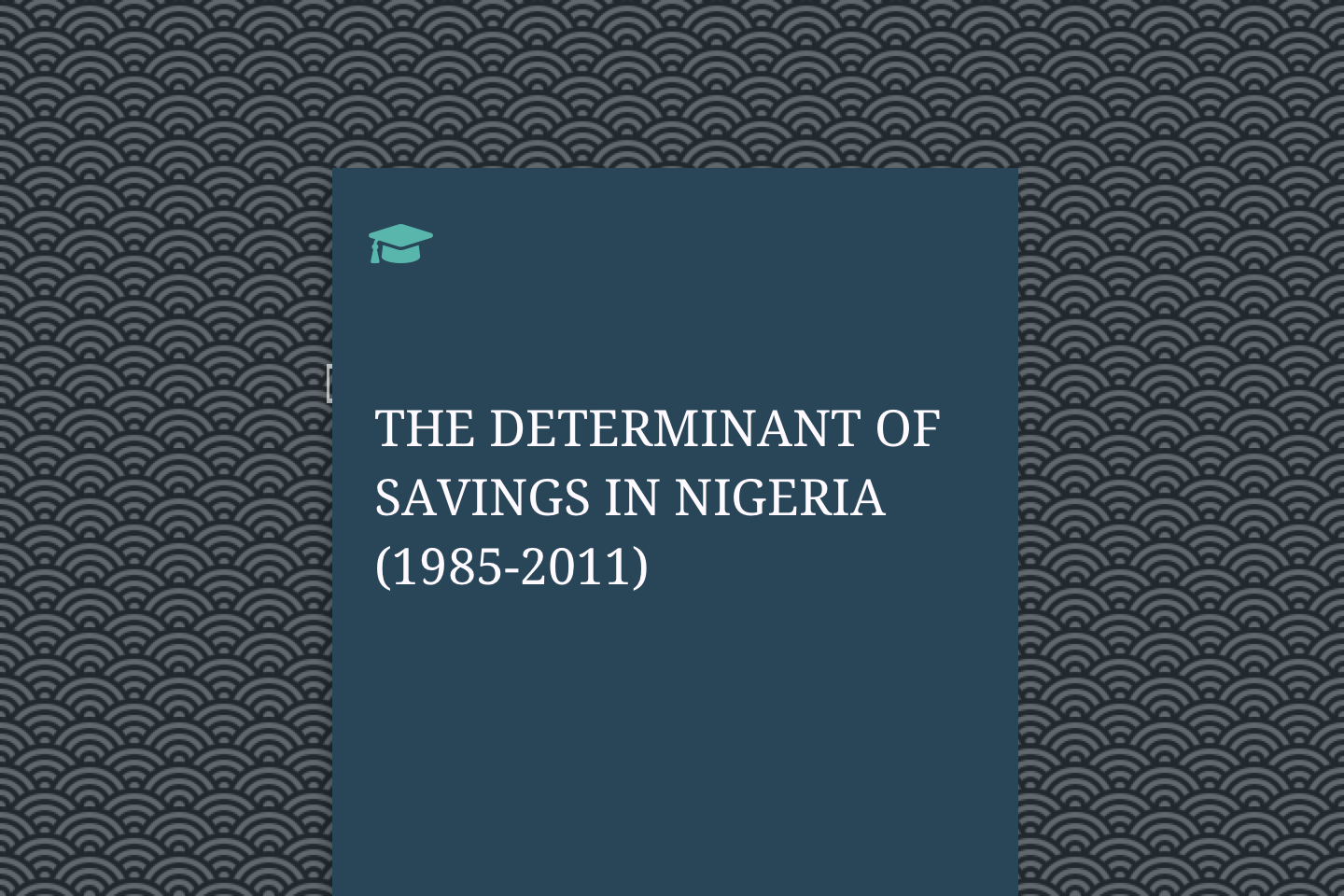 The term savings refers to the part of income immediately spent or consumed but reserved for futureconsumption, investment or unforeseen contingencies. This study examines the determinants of savings in Nigeria between 1985-2011, which will enable us to proffer solution for the improvement of savings in the economy, since it is an important component of the economic development of any country. The method of analysis used in testing the hypothesis are coefficient of multiple determination {R2}, T –test,F-statistics. Data for the study was obtained from the central bank of Nigeria statistical bulletin, the major findings was that per capita disposable income{pdy} has a positive and significant impact on aggregate savings in Nigeria. Based on the findings, some recommendations of policy and suggestions have been made.

1:1 BACKGROUND OF THE STUDY

Capital formation is an important factor of an economy growth. For a country like Nigeria to attain economic growth, serious effort should be geared towards capital formation by encouraging savings. The financial institution markets, regulators and instrument interact within an economy to provide financial services such as foreign exchange transaction, financial intermediation and resources mobilization and allocation.

Miracle and Cohen (1980) noted that a great bulk of the African population makes little or no use of formal saving and lending institutions, because they offer relatively low returns, savers are reluctant to use formal institutions.

The crucial role played by the financial system in the economic development of an economy was recognized by Gold Smith (1955), Cameron (1967), McKinnon (1973), and Shaw (1973), they demonstrated that the financial sector could be a catalyst of economic growth if it is well developed and healthy. Over the past decades, the declining rends in saving rates in Nigeria have been of great concern to the policy makers and researchers. This is due to the critical importance of savings for the maintenance of strong and sustainable growth in the world economy especially in Nigeria. A sound, developed, healthy and reliable financial system relate to saving mobilization efficient financial intermediaries roles, is first to reduce hoarding and help spread the risk between household and firms.
Secondly, hey create liquidity in the economy by borrowing short term and lending long term loan. Thirdly disseminate information between ultimate lenders and ultimate borrowers there by mobilizing savings from surplus units and channeling them to deficit units through the help of financial techniques, instruments, and institution. Fourth, lower interest rate by bringing about stability in capital market. Fifth, the intermediaries promote development in the financial transaction. Gibson and Isiaka Lobos (1994).

The Nigeria financial system comprises he regulatory/supervisory authorities, bank and non bank financial institution. As at the end of 2007, the system comprised of the regulatory/supervisory authority. The Central bank of Nigeria (CBN), the Nature Insurance Commission (NAICOM), the Nigeria Deposit Insurance Corporation (NDIC). The Securities and Exchange Commission (SEC) and finally the Federal Mortgage Bank of Nigeria (FMBN). The CBN is the principal regulator and supervisor in the money market followed by deposit money banks (DMBS), Discount Houses, the people bank of Nigeria and Community Banks. The CBN exclusively regulates the activities of the finance companies and promotes the establishment or specialized or development financial institution.

Saving refers to the part of income not immediately spent or consumed but reserved for future consumption, investment or unforeseen contingencies, it is considered as an indispensable weapon for economic growth and development. Its role is reflected in capital formation through increase in capital stock and the impact its makes on the capacity to generate more and higher income.

Savings can also be known as a sacrifice of current consumption that provides for the accumulation of capital, which in turn, provides additional output that can potentially be used for consumption in the future(GERSOVIZ 1988).in other words savings is the different between current earnings and consumption. We can also define savings as he deposit and saving ability acquired by the organized financial institution including bank and non banking financial intermediaries or it is described as a financial accumulated by the public, both government and private agents in the organized financial channels. These financial assets include savings and time deposit in the banking institution provident funds, insurance premium stocks and bonds etc.the intermediation process involves moving funds from surplus sectors of the economy to deficits sector units(Nnann and Englama 2004).To expand financial savings involves shifting of fund from the personal and household sector to the business or corporate sector which in turn leads to greater investment, income growth, employment and capital formation, which cannot be achieved without increasing the rate of savings.

Nigerians savings still falls below the requirement of its financial system due to low per capital income, under investment in productive instruments, and investment in unproductive channels e.g. Glod, jewel, income inequalities and demonstration effects, etc.to remedy this problem depend on the level of development of the financial sector mentioned above as well as the saving habit of the citizens. The availability of investible funds can be a starting point for all investment. In the economy which will eventually translate to economic growth and development (Uremadu 2006).

The relationship among savings, investment and growth has historically been very close, hence the unsatisfactory growth performance of several developing countries, example Nigeria, has been attributed to poor savings and investment. This poor growth performance has generally led to a dramatic decline in investment. Domestic savings rates have not better, thus worsening the already uncertain balance of payment position, the role of savings in the economic growth of any country cannot be overemphasized (Cheta 1999). Conceptually, savings represent that part of income not spent on current consumption.
Institutions in financial sector like deposit money banks (DMBS) commercial Banks mobilize savings in an economy, the deposit rate must be relatively high and inflation rate stabilized to ensure a high positive real interest rate which motivates investors to save from their disposable income.
In Nigeria Odoko and Englama (2004) are of the view that the level of funds mobilization by financial institution is quite low due to a number of reason, ranging from low savings deposits rates of the poor banking habit or culture of people. According to them another impediment to funds mobilization is the attitudes of banks to small savers.

Another limitation of saving mobilization is the fact that the concentrations of banks are heir offices are based in favour of urban areas. Among the reasons for this, is the fact that the established banks under rate the volume of savings seeking to be mobilized and channeled into productive investment in the rural areas. It is often argued that since the rural economy operates at a near subsistence level, there is very little that can be squeezed out of income and consumption. Because of this, it has not been realized that the large volume of idle funds, through is small units per individuals exist in the rural areas.

In Nigeria there is basically lack of incentives to savings which had adversely affected savings. Some of these factors include poor banking habits, attitude of banks to small savers, poor orientation, unemployment, instability in the political system etc, corrupt taxation system, instability in banking system etc. one of the problems of mobilizing savings and deposits has always been a major problem for economic growth and development in Nigeria.

According to Friedman (1952) the impact of health on saving has been long recognized in theory, but its effect on the aggregate savings have been considered to be over shadowed by another factor, inflation causes price of tangible assets to rise sharply and changes in net worth based on rising market value giving the illusion of well being the magnitude of the impact of wealth on saving rate may have the reassured experiences of economic crisis have highlighted the fact low and declining saving rate have contributed to generate unsustainable current account deficits in many countries.

The above arguments underscores the fact that there exist a link between savings and the growth performance of the economy, both in Nigeria and in the world over. This necessitates the need to carry out a detailed study of what actually determines the rate of savings in the contexts of Nigeria economy.

Saving is a macro-economic variable used to attain economic growth and development (Wikipedia encyclopedia, 2009). In Nigeria, there is lasting need to further step-up efforts in mobilizing small savings in both urban and rural areas, given the poor savings culture of the Nigerian people and the theoretical link between saving and investment which underscore the importance of savings on the growth of every economy. When savings are low, interest rate increases and investments becomes low there will be low income and decrease in the Gross National Product (GNP) and Gross Domestic Product (GDP) of the nation which leads to the poor living standard of the people and hinders the depositors from savings.
This research work would attempt to examine the magnitude and nature of such variable as interest rate, inflation, income, urbanization on savings in Nigeria.

The broad objectives of the study are to examine the determinant of savings in Nigeria economy. However, the specific objectives are as follows.

The findings and subsequent proposal would be useful to policy makers in policy formations. This study as believed by the researchers would go a long way in contributing to the academic development of the theories of determinant of savings in Nigeria, student of economics and other related fields, would find the study very useful and would serve as a reference point to future researches who might want to research further on the topic.

1.6 STATEMENT OF THE HYPOTHESES