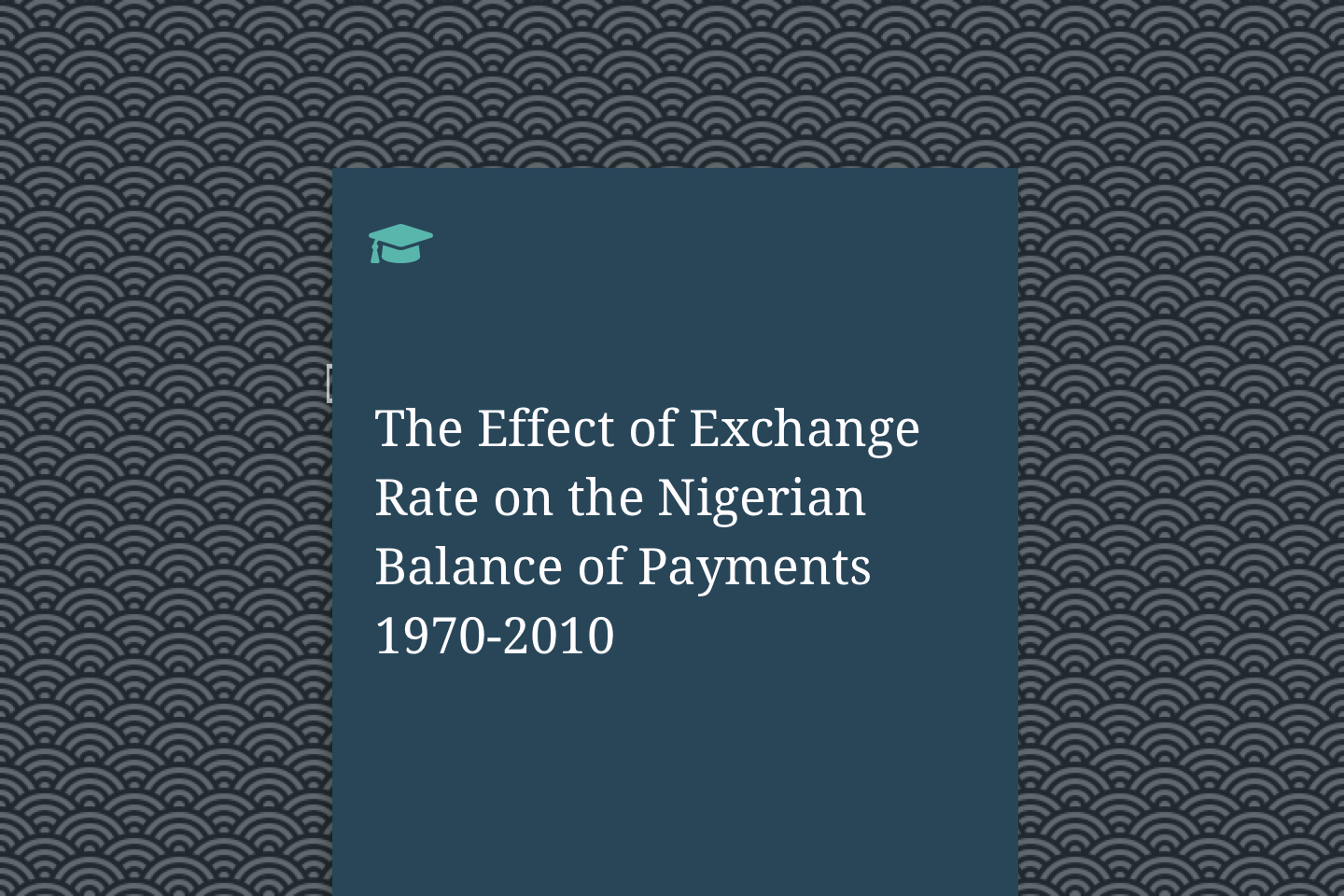 This work sets out to examine the relationship between balance of payment and exchange rate. The work is divided into five chapters; chapter 1 gives a general introduction to the subject matter, chapter two gives the general review of literature in the subject matter, chapter 3 gives or states the methodology and specifies the model used for testing. Chapter four runs the required test and provides the result as well as the interpretation and chapter five concludes the findings and recommends policy for the government based on the findings in the test.The ordinary least square regression (ols) method is used to test for R-squared test (explanatory power of the variables), T-test for the reliability, F-test for the overall significance of the exponentials and D.W test which is the econometric criterion for testing for presence of auto regressive scheme. The result shows a negative relationship between balance of payment and trade openness, also there exists a positive relationship between exchange rate and foreign direct investment. Since trade openness has a negative impact on the balance of payment it is recommended that the government should not consider it a policy for economic development.

Right from time immemorial, a country’s exchange rate and balance of payment is usually regarded as the sum of indices by which a nation’s strength can be measured especially its economic strength. Paul (1996) defines balance of payments as an accounting record to all monetary transactions between a country and the rest of the world.
These transactions include payments for the country’s exports and imports of goods, services and financial capital, as well as financial transfer. It summarizes the international transaction for a specific period usually one year and is prepared in single currency for the country concerned. Nzotta (2004) defines foreign exchange as the value of foreign nation’s currency in terms of the home nation currency. In finance, the exchange rates (as also known as the foreign exchange rate or forex rate) between two currencies specify how much one currency is worth in terms of the other.
Devaluation is tall in a fixed exchange rate, which reduces the value of a currency in terms of other currencies. So what we are trying to do in this study is to determine how the reduction value of a currency with respect to the currency of another country affect the record of all monetary transactions between a country
and another, whether visible or invisible in a period of time. This is very important because no nation can exist on its own no matter how independent or self-sufficient it can be, it is important to have a relationship with other nations which can be characterized by goods and services going one way and foreign exchange going the other way. When accessing the nation involved, a record of gains and losses may have been kept. As such a nation’s foreign exchange and balance of payments can help slowdown, accelerate or decelerate walking growth progress and development. This will also have a positive or negative effect on the citizens since it deals mainly with economic relations.
Our nation Nigeria is currently facing serious problems regarding its foreign exchange rating (which is very low in comparison to other countries) and it’s Balance of payment which is clearly in disequilibrium and in a deficit. As a result of this the government is retrogressing and the citizens clearly suffering.
It is in a bid to discover why this is so and how this can be solved that this study as pertinent.

1.2 STATEMENT OF THE RESEARCH PROBLEM

Foreign exchange and balance of payment are the key factors of a nation’s life. They are also factors to look into when comparing a country’s relationship with other nations. These factors directly or indirectly affect a host of other factors which are of severe importance in any nation. Consequently these factors can be seen as essential to the growth and development of the nation.
Currently these two factors can be said to have crippled the Nigeria economy and made life uncomfortable and unbearable for it citizens. These factors have brought the country to a level where growth and development appear to be an illusion.
Currently the nation’s exchange rate has fallen so low due to unfavorable nature of the competing power of the nation’s currency with foreign currencies of the world. Our economy has been trying to resolve the problem of external and internal balance, which has manifested in disequilibrium in our balance of payment and causing us a balance of payment deficit.
Much controversy had also been degenerated by the devaluation of our Naira (the national currency). Relevant literature and opinion on this issue are of the view that exchange rate policy plays an important role in maintenance of internal and external balance, on the other hands, other writers argued that devaluation is not the best policy for the less developed country because of many diverse results.

This work is guided by the following research questions:

The general objective of this study is to examine the effect of exchange rate on the balance of payment of a nation with special reference to Nigeria. The specific objectives are to:

Hypothesis will be tested in other to allow success of this work. The hypothesis includes;
1. There is no significant relationship between exchange rate and balance of payment (BOP) in Nigeria.

This study is limited to exchange rate and its effect on balance of payment with reference to the Nigeria economy. It covers a period of 40 years i.e from 1970 to 2010.

The Impact Of Microfinance On Entrepreneurship Development In Nigeria