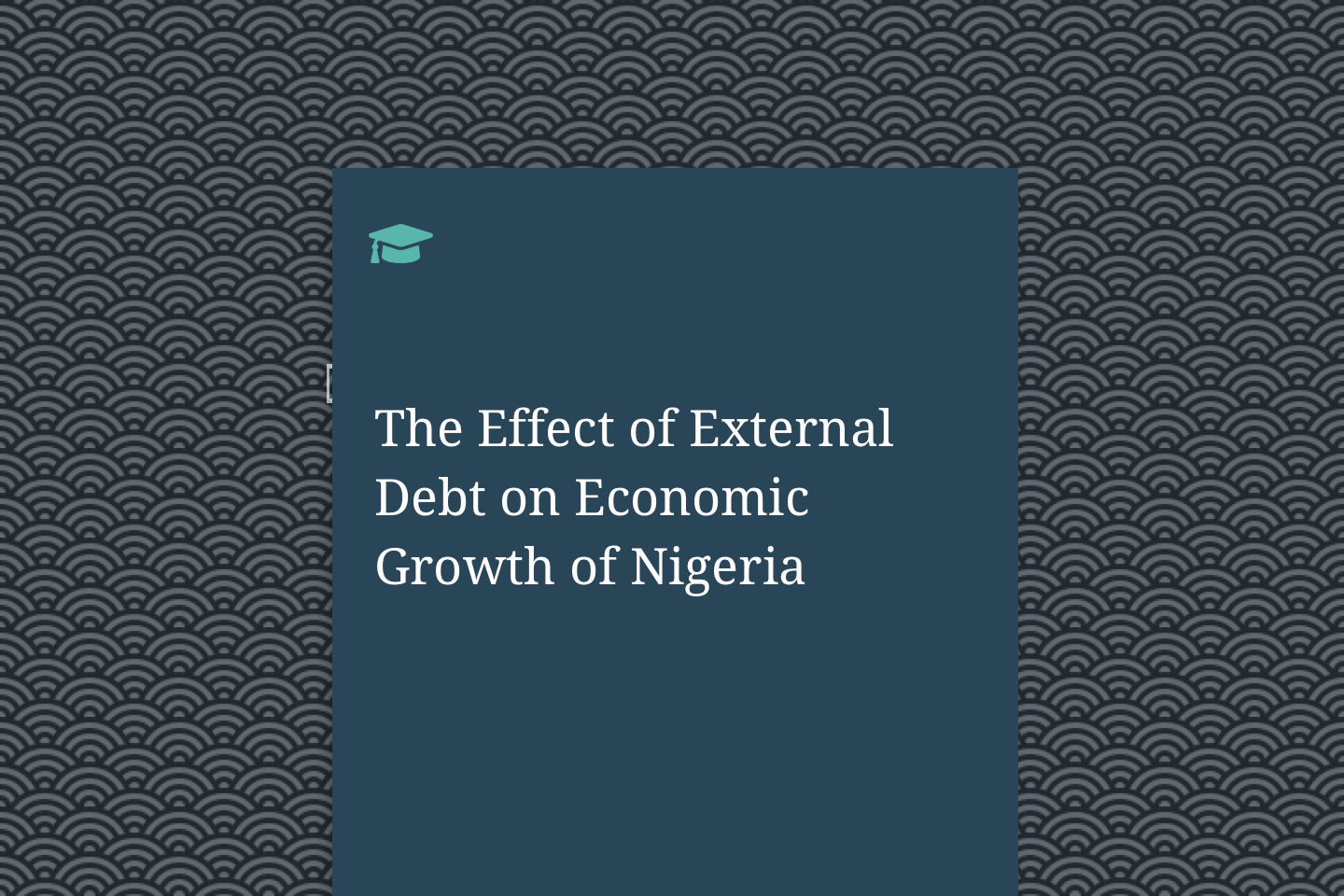 The Effect of External Debt on Economic Growth of Nigeria

This work evolved out of the need to provide an in-depth understanding of the economics of debt in Nigeria. This study aims at analysing the effectiveness of external debt on economic growth within a span of 1981-2010. The broad objective of this work is specified to evaluate the impact of external debt stock and debt servicing on economic growth. In all, the models were to show the growth relationship between the independent variables-inflation rate, exchange rate, interest rate, government expenditure, external debt stock and external debt service and the dependent variable-gross domestic product (GDP). The data were collected from CBN Statistical Bulletin 2010 and the Debt Management Office (DMO) quarterly report. The Engle & Grenger Cointegration and Ordinary Least Square (OLS) were employed in the cause of this study. The Augmented Dickey Fuller test (ADF) shows that the variables are stationary and reliable for forecasting. The choice of OLS is most appropriate for the study in terms of goodness of fit and significance of regression coefficients. The result of the analyses showed that rising external debt stock inhibits the pace of economic growth of Nigeria by increasing the cost of its servicing beyond the debt sustainability limit while external debt servicing was found not to impair economic growth.
Summary and policy recommendations were presented in line with our stated objectives and facts then conclusions were made. It was found that external debt stock rises rapidly due to accrued compound interest and loans were secured for dubious projects. Part of the policy recommendations were that Nigeria should increase its export base by investing borrowed funds in productive ventures and she should also seek fixed interest payment, varying amortization schemes and multi-year rescheduling.

1.0 BACKGROUND OF THE STUDY

It is generally expected that developing countries, facing a scarcity of capital, will acquire external debt to supplement domestic saving (Malik et al, 2010; Aluko and Arowolo, 2010). Besides, external borrowing is preferable to domestic debt because the interest rates charged by international financial institutions like International Monetary Funds (IMF) is about half to the one charged in the domestic market (Pascal, 2010). However, whether or not external debt would be beneficial to the borrowing nation depends on whether the borrowed money is used in the productive segments of the economy or for consumption. Adepoju et al (2007) stated that debt financed investment need to be productive and well managed enough to earn a rate of return higher than the cost of debt servicing
The main lesson of the standard “growth with debt” literature is that a country should borrow abroad as long as the capital thus acquired produces a rate of return that is higher than the cost of the foreign borrowing. In that event, the borrowing country is increasing capacity and expanding output with the aid of foreign savings. The debt, if properly utilised, is expected to help the debtor country’s economies (Hameed et al, 2008) by producing a multiplier effect which leads to increased employment, adequate infrastructural base, a larger export market, improved exchange rate and favourable terms of trade. But, this has never been the case in Nigeria and several other sub-Saharan African Countries (SSA) where it has been misused (Aluko and Arowolo, 2010). Apart from the fact that external debt had been badly expended in these countries, the management of the debt by way of service payment, which is usually in foreign exchange, has also affected their macroeconomic performance (Aluko and Arowolo, (2010); Serieux and Yiagadeesen, (2001).
Prior to the $18 billion debt cancellation granted to Nigeria in 2005 by the Paris Club, the country had external debt of close to $40 billion with over $30 billion of the amount being owed to Paris Club alone (Semenitari, 2005a). The history of Nigeria’s huge debts can hardly be separated from its decades of misrule and the continued recklessness of its rulers. Nigeria’s debt stock in 1971 was $1 billion (Semenitari, 2005a). By 1991, it had risen to $33.4 billion, and rather than decrease, it has been on the increase, particularly with the insurmountable regime of debt servicing and the insatiable desire of political leaders to obtain loans for the execution of dubious projects (Semenitari, 2005a).
Before the debt cancellation deal, Nigeria was to pay a whopping sum of $4.9 billion every year on debt servicing (Aluko and Arowolo, 2010). It would have been impossible to achieve exchange rate stability or any meaningful growth under such indebtedness. The effect of the Paris Club debt cancellation was immediately observed in the sequential reduction of the exchange rate of Nigeria vis-à-vis the Dollar from 130.6 Naira in 2005 to 128.2 Naira in 2006, and then 120.9 in 2007 (CBN, 2009). Although the growth rate of the economy has been inconsistent in the post-debt relief period as it plunged from 6.5% in 2005 to 6% in 2006 and then increased to 6.5% in 2007 (CBN, 2008), it could have been worse if the debt had not been cancelled.
However, the benefits of the debt cancellation, which was expected to manifest after couple of years, was wiped up in 2009 by the global financial and economic crisis, which was precipitated in August 2007 by the collapse of the sub-prime lending market in the United States. The effect of the crisis on Nigeria’s exchange rate was phenomenal as the Naira exchange rate vis-à-vis the Dollar rose astronomically from about N120/$ in the last quarter of 2007 to more than N150/$ (about 25% increase) in the third quarter of 2009 (CBN, 2009). This is attributable to the sharp drop in foreign earnings of Nigeria as a result of the persistent fall of crude oil price, which plunged from an all-time high of US$147 per barrel in July 2007 to a low of US$45 per barrel in December 2008 (CBN, 2008).
Available statistics show that the external debt stock of Nigeria has been on the increase after the debt cancellation in 2005. The country’s external debt outstanding increased from $3,545 million in 2006 to $3,654 million in 2007, and then to $3,720 million and $3,947 in 2008 and 2009 respectively (CBN, 2009). It is therefore imperative to examine the effect of external debt of the country on her economy for us to appreciate the need to avoid being back in the group of highly indebted nations.

The huge external debt stock and debt service payments of African countries and Nigeria in particular prevented the countries from embarking on larger volume of domestic investment, which would have enhanced growth and development (Clements, etal. 2003). External debt became a burden to most African countries because contracted loans were not optimally deployed, therefore returns on investments were not adequate to meet maturing obligations and did not leave a favourable balance to support domestic economic growth. So, African economies have not performed well because the necessary macro-economic adjustment has remained elusive for most of the countries in the continent. The main interest of this study then is to empirically investigate the effect of external debt on the economic growth of Nigeria.

The study will focus on the following objectives:

This study is focused on providing alternative measures to tackling external debt management problems. It will also serve as a tool in revamping government policies towards loan procurement and debt servicing in Nigeria. This work may also serve as a yardstick for further research and documentation on Nigeria’s external debt crisis.

1.5 SCOPE AND LIMITATIONS OF THE STUDY

The scope of this study shall cover the external debt trend of Nigeria over the years to date. The general overview of the debt cancellation shall be taken with certain issues raised and discussed.However, the empirical investigation of the effect of external debt on the economic growth of Nigeria shall be restricted to 1981 and 2010. This restriction is unavoidable because of the non-availability of some data.