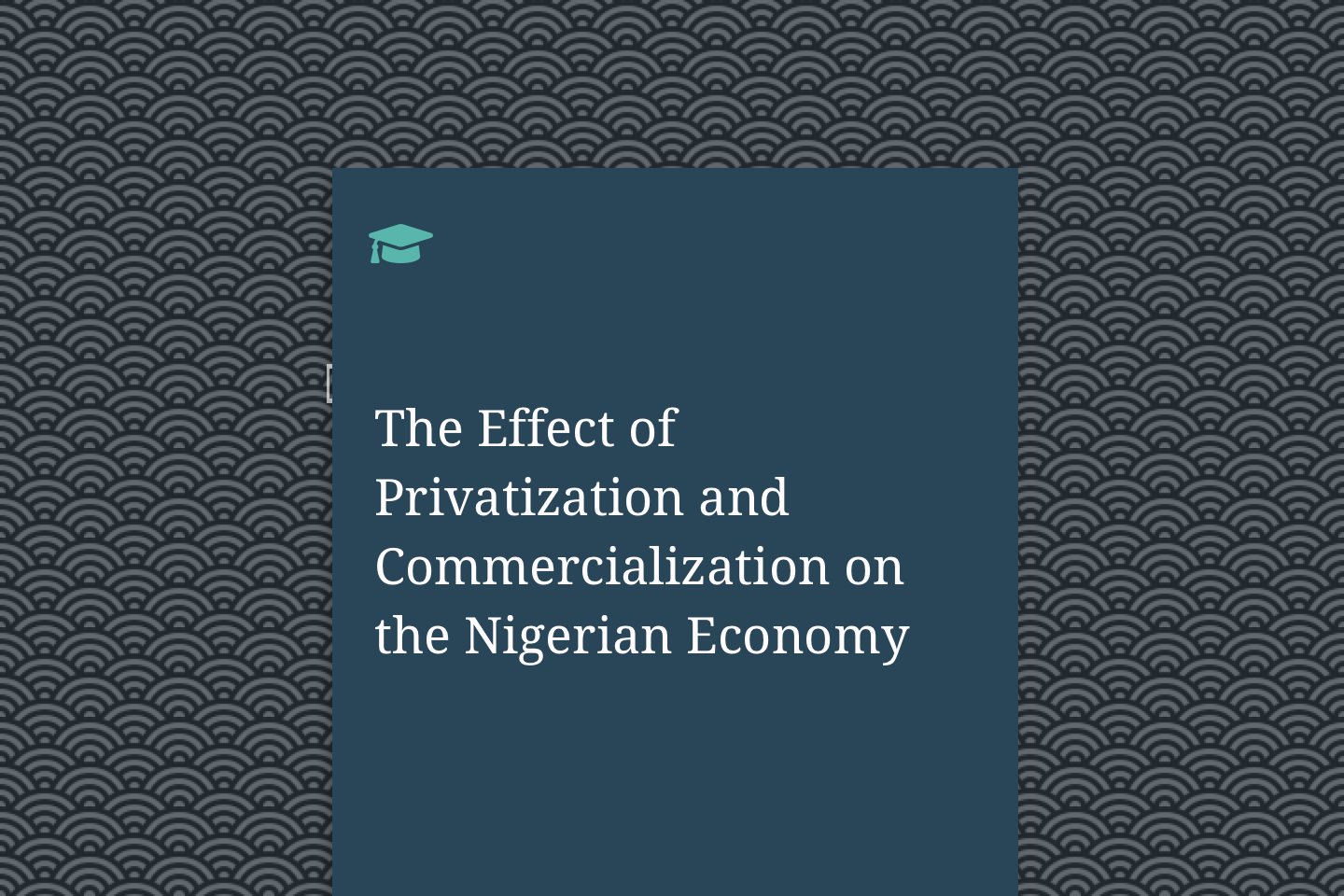 The privatization and commercialization of Nigerian enterprises today, faces a lot of challenges in tackling the menaces of corruption and mismanagement of public funds. It is because of social issues like economic inequalities, unemployment that made the state to interfere in economy of Nigeria. Government chose public sector as a means or medium for economic and social development due to poor managerial skill, weak technological base etc, this enhanced the zeal to establish various enterprises institution in Nigeria. Then, due to inadequate capital and lack of finance, public enterprises in Nigeria are confronted with many problems by the employees, managers and political interference in the affairs of public enterprises. This study concluded by saying that the effect of privatization and commercialization on the Nigerian economy can only take effective progress when the enterprises are wholly or partially in some cases handled and controlled by the private owner whom will not relent in the optimization of profitable enterprises.

To be able transform into an industrialize economy; an underdeveloped economy has to be privately and commercially developed.
The importance of establishing public enterprises or corporation began during the 19th century with the British telecom in 1884 under the telecommunication act and gained a worldwide support in Britain thereafter. Several nations particularly those in Africa, have come to embrace the principle as a way of eliminating low performance and inefficiency in the public enterprise sector.
Following the trend the Nigerian economy has come to embrace privatization as a cardinal principle of the state’s economic policy. Over the years, the Nigerian government has encouraged the development of the public sector, since independence in 1960 and particularly 1970s but has being commonly non successive because of government attitude towards public enterprises business management. In Nigeria, most government owned industries and establishments remain citadels of corruption, studies in inefficiently and consequently a heavy drain on the economy. As a means of combating this menace, the (IMF) and (World Bank) have advocated the twin policies of privatization and commercialization incidentally Nigeria has fully adopted this policy and is embarking on it with frenzy. For example, Nigerian breweries changed from the most inefficient and loss-making company before privatization to one of the most profitable business in Nigeria. Nigeria has more than 1,800 public enterprises at federal and state levels which can be categorised as follows;-
It is important to note that the introduction of SAP in 1986 serves as a bench mark in economic policy-making in Nigeria with the resultant, liberalization, deregulation, privatization and commercialization measures.
The critical question here remains how many of these policies have been able to restructure the political economy of Nigeria and in turn alleviating the yearnings and aspiration of the working class.
The world no doubt is moving towards capitalism and liberalization and any nation that is not moving towards this direction is seen as either not developing or even retrogressing. A capitalist economy is a free market economy which allows most economic decisions to be guided by the twin forces of demand and supply. Since capitalism discourages monopoly but encourages competitive market, it therefore enhances efficiency and high productivity which is very vital in any developing economy.

1.3 OBJECTIVE OF THE STUDY.

The hypothesis tested in this study is stated in its null form as follows:
Ho: privatization and commercialization has no significant effect on the GDP in Nigeria.

This research work will help the government and readers to understand those benefits that privatization and commercialization program embodies which we have neglected and politicized within the past. In understanding this on the side of the government, it will allow them to rethink and work towards real implementation of it and thereby creating a room for the rapid growth and development of this country.
At the other hand, it will go a long way to create an avenue for more academic research. The importance of any research is to finding out solutions that faces mankind and the environment or society. The study creates awareness to every citizen of this country and economic planners on the implication of these privatization and commercialization of public enterprises in Nigeria economic development.

The scope of this research work focused strictly on the effect of privatization and commercialization programmes on the Nigerian economy 1970 to 2010.