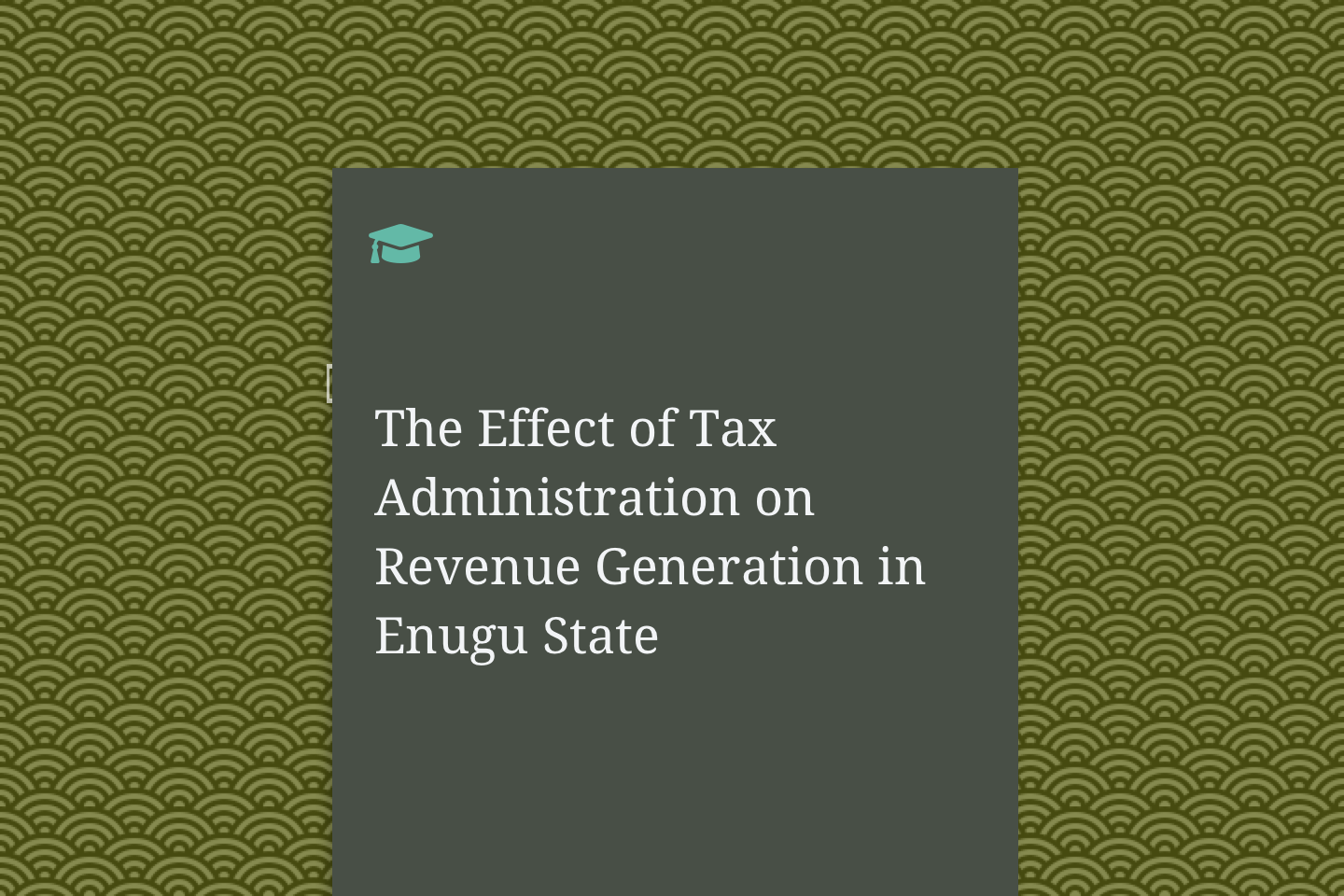 The Effect of Tax Administration on Revenue Generation in Enugu State

The level of revenue generated in the state has been in a declining form due to poor administration and collections of taxes and lack of proper return of accounts. These are the negative effects that affect government revenue generation which are targeted to meet her basic functions like provision of basic amenities for her citizenry in the state. The aim of this research study is to evaluate the effect of tax administration on revenue generation to the Enugu state government. The research design adopted in this study was survey research method. Primary and secondary sources of data were used in collecting information which was analyzed using simple percentages and hypothesis tested using chi – square statistical method at 0.05 level of significant for validity and to make decisions. Findings show that there was rampant incidence of tax evasion and avoidance in the state, and the tax administration in Enugu state is inadequate, not effective and not efficiently managed thus: inadequate staff and facilities also hinder tax administration and collection. The researcher, in the final analysis drew a lasting conclusion, some of which are:- the apathy of Enugu state people towards payment of tax could be reduced by involving them in the decision making of tax administration, collection and utilization of the tax revenue. The environment should be made better by both the government and its agencies. The staff of the SBIR Enugu should be well remunerated and ensure adequate administration of tax laws in accordance with the laid down rules and regulations.

In all generation, the problems of personal income tax generation and administration continues to surface in one form or another in virtually every society, especially in this part of the world. It is important to point out that the federal government has taken adequate steps in effective tax administration.

This failure on the part of the federal government is responsible for poor financial positions of both the state and local government. Besides, this inadequate planning and absolute laws governing taxation, evaluation and collection is characterized by chaos.

This chaotic nature of the system can be appreciated by political influence or interferences in the process of taxation during the civilian administration in the country which gave rise to untrained and inexperienced personal being entrusted with the work of collection and administration of personal income tax.

BOARD OF INTERNAL REVENUE ENUGU

The board of internal revenue Enugu was established to administer income tax in Enugu state just as there are likely to states of the federation.

Income tax was first introduced in Nigeria in 1904 by late Lord Lugard. The introduction of Native Revenue ordinance of 1927 was most difficult in the Eastern areas of the country, due mainly to absence of recognized central Authority Resistance to this form of direct taxation in such that it result to riots notably in calabar, Owerri and the famous, Aba women Riot of 1929 which was so severe that it attracted a probe. Beside, the Native Revenue ordinance were also Native direct taxation ordinance for the colony and the Native income tax ordinance.

The direct taxation ordinance 1940 empowered native authorities to tax Africans in their areas of jurisdiction while the income tax ordinance 1943 was for the taxation of non-Africans in companies. The two ordinances were the foundation of our modern taxation which necessitated establishment of board of internal revenue in each of the states of the federation which Enugu Board of internal Revenue is one of them. 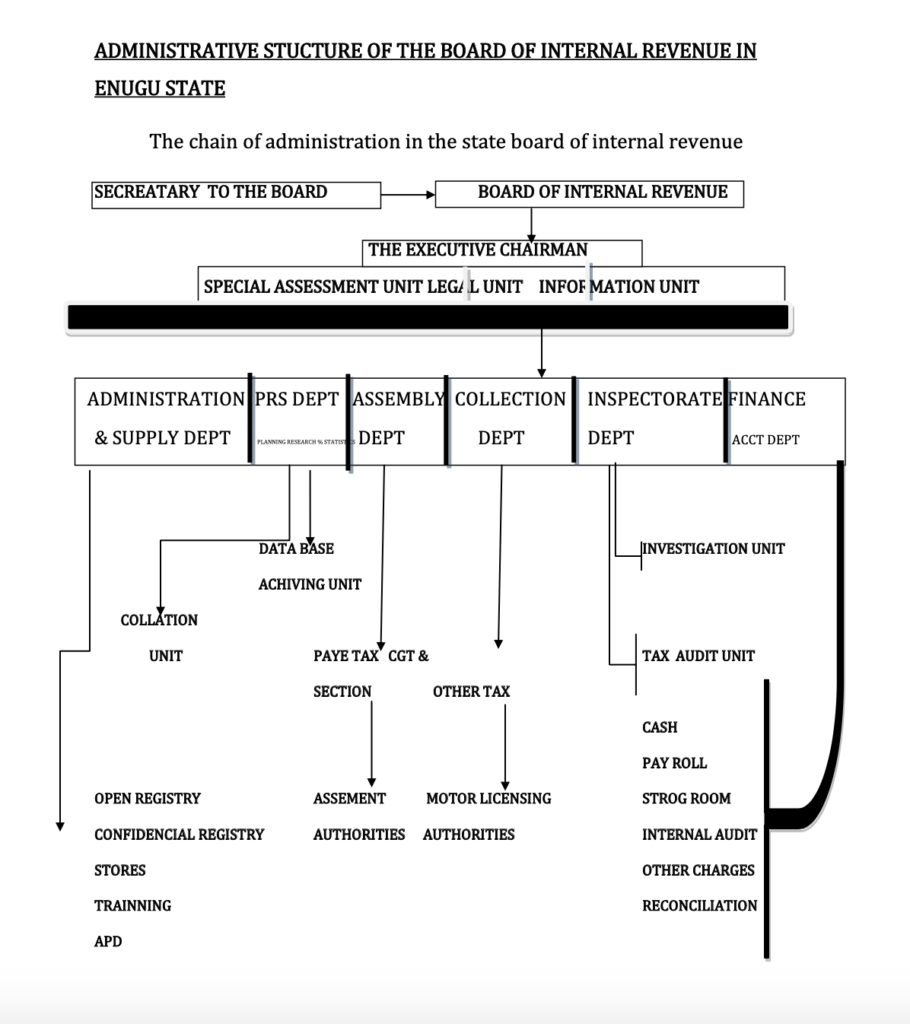 The zonal tax Authority which Enugu North Board of internal Revenue belongs to the Enugu Zonal Authority. The highest authority in the Area is the Assessment Authority.

The assessment officer is the head of the board of internal Revenue in the area. He is appointed by the Board of internal Revenue, Enugu State. He is responsible for the assessment of tax and its collection and as well as accounting for it. He carries out the duty with the help of collection, Assessment and Administrative officers. He is directly in change of assessment and administration. He has the power to issue notice to tax payers to deliver statement of incomes or to finish further returns.

Where there is suspected doubts as to geniuses of returns, he might ask the tax payer to produce before assessment Authority books and documents of the tax payer covered by pay as you earn (PAYE).

The Assessment Authority could ask an employer to prepare and deliver a return on his employees. After assessment and responsibility of collection of this assessed income rests on the tax collector. He makes use of tax agents, tax drivers or the workers of the board and other processes which may be applied from time to time to generate tax in the area.

The structural administration of personal income tax is rested in the joint tax Board (JTB) under the income tax management Act 1961.

The board is made up the chairman who is appointed by federal Board of internal Revenue (FBIR) which is the federal body. The personal must be experienced in tax matters. Also, a secretary and a legal adviser are appointed, some of their functions are:

To exercise the powers or duties conferred upon them by any express provision of the Act, and any other power and duties arising under the Act which may be agreed by the board.

To exercise the powers and duties conferred on them by any enactment of the Federal Government imposing tax on the income or properties of companies or which may be agreed by the Federal Board of internal Revenue.

It is headed by a chairman with the Director of Revenue as his Deputy Chairman and the chief executive of the board. Other members of the board

include representative of specified ministries and from field economics, accountancy and legal professions.

Their major function includes, to see the retrieval of the revenue collected by various tax officers in all local government head quarters and forward it to state government for disbursement.

Inspector of taxes are controlled by the Board. They have variety of duties covering all aspects of taxation some of their duties are:

They are concerned with the service of

It is true that problem of tax collection and administration is universal but the third world countries of which Nigeria is one, seem to be more plagued and inflicted both in weight and magnitude than the developed nations of the world.
The research work primarily involves identifying the problems of the personal income tax generation and administration in Nigeria taking a case study of Board of Internal Revenue, Enugu state. The specific problems of this research are as follows:

Thus lack of enforcement power on the board makes tax laws useless and not serious to tax offenders /defaulters.

The general objective of the study is to asertain the effect of tax administration on revenue generation in Enugu state, using the state board of internal revenue as a case study.
The specific objectives of the research work is to

Upon the following research questions, hypothesis where formulated.

1. To what extent has the use of mechanical and outdated system of keeping and recording accounts affect tax administration on revenue generation in Enugu state.

2. To what extent does lack of sufficient staff and inadequate training of the available tax collectors affected tax administration on revenue generation in Enugu state.

3. To what extent has lack of improper enlightening of tax payers has affected tax administration on revenue generation in Enugu state.

4. To what extent has tax administration in Enugu state been effective and efficiently manage.

Owing to flexibility of tax laws in Nigeria and attitude of government toward the local government level in the area of administration and collection of personal income tax. It is pertinent to make some assumption that will guide the work for an opinion to be expressed.

Ho: The use of machnical and oudated system does not affect tax administration and collection in Enugu State.

Hi: The use of mechnical and outdated system affects tax administration and collection in Enugu State.

Ho2: Inadequate staff and training of the available tax collector does not affects tax administration and collection.

Ho3: Enlightening the tax payers on the important of tax payment does not affect tax administration in Enugu state.

Ho4: Tax collection and administration in Enugu state is effective and efficiently managed.

Hi4: Tax collection and administration in Enugu state is not effective and efficiently managed.

1.6 Significant of the study

The researcher is motivated to study the ways through which internally generated revenue in Enugu state could be enhanced.

The information contained here will benefit the society at large as it will expose the society to the need to pay tax and consequence of failure to pay tax.

The study will no doubt charge the aggressive attitude of an average Enugu man towards the payment of tax and collectors of taxes who were hitherto regarded as enemies.

Owing to the present steps taking by federal government in re – branding the economy activities, the research work will recommend measure that will be taken by the state Board of internal Revenue, Federal Inland

Revenue Services, budget and Planning department and other government decision – making bodies ways to enhance effective administration of her services and achieve immensely her stated objectives, especially in the area of tax administration on revenue generation.

The study will also unleash problems affecting tax effectiveness, which if appropriate corrective measures taken will go a long way in improving the state internally generated revenue machineries of the government.

The research will focus on:

1.8 Limitation of the Study

Despite all this limitations mentioned above and hindrances, the research study no doubt turned out to be successful.

Words that are frequently used in this research work are short listed here and briefly discussed to enable the reader get equipped with their meaning. Some which are:

Tax: This can be defined as a compulsory transfer of resources and Income from the private sector in order to achieve some of the nation “economic goals Okpe (1998: 109)

Tax Evasion: Here, the tax payer adopts illegal means so as to pay less than he should ordinarily pay. “It is also involves an unlawful refusal or neglect by a tax payer to pay the tax due.” J.C Aroh & E.ONwadialor (2009: 352)

Tax Avoidance: This is a means where by the tax payer arranges his affairs legally so that he pays less tax than he should otherwise pay.

Revenue Generation: This is systematic gathering / collection of income revenue.

Revenue: This could be described as an income accruable to person(s), government and organization.

Statutes: This is a legal frame work upon which actions/ inaction are based.

Tax Jurisdiction: This refers to an area where one tier of government has power to collect tax.

Tax Allowance: This refers to the proportion of income exempted from tax.

Tax Holiday: This is a period of grace granted to a company during which it’s income is not subjected to tax.

Taxable Income: This refers to that proportion of income that is liable to tax.

P.A.Y.E (Pay As You Earn) is one of the systems of personal income tax based on the proportion of the income usually deducted at source.

Evaluation of Fraud Control Measures in the Nigerian Banking Sector