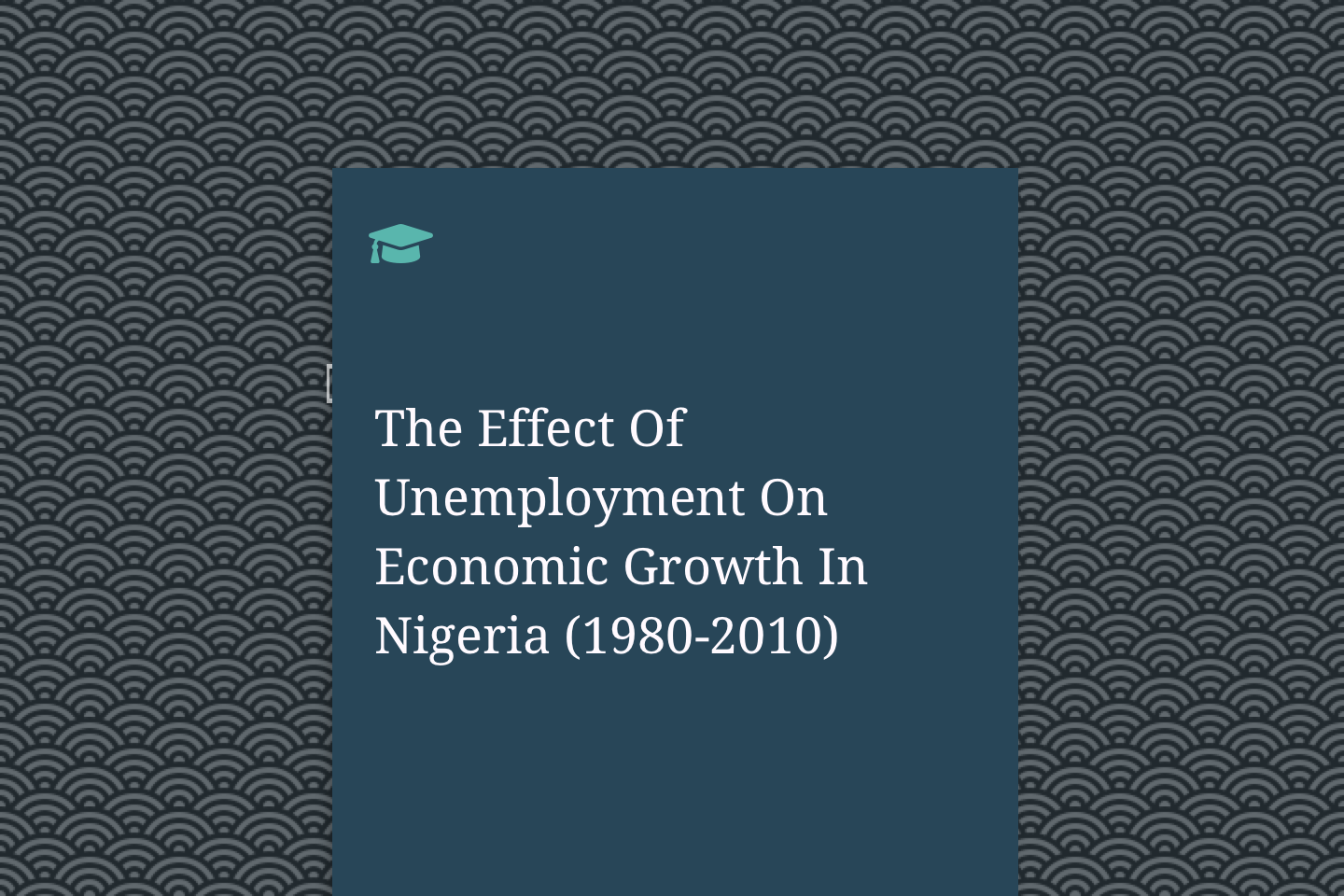 The study was designed to investigate the effect of unemployment on economics growth in Nigeria for a period of 31 years (1980-2010). It focus is to determine the relationship between unemployment and economic growth in Nigeria (GDP).The finding was that unemployment has a positive but insignificant impact on the gross domestic product (GDP) of the Nigeria economy, Despite the fact that the effect of unemployment on economic growth is not significant, its positive coefficient suggest that unemployment rate is also increasing over time, so the study recommends policies reverse this trend. The study included that government should formulate policies that will help in proper check of annual unemployment rate, and its outcome on the effort to reduce it, in order to know how to battle it, the coming year.

In the developing economies, unemployment has been and still is the countries number one economic problem. This problem has posed a great challenge to many countries [both developed and developing].it has been categorized as one of the serious delay to social progress. Apart from representing a big waste of a countries man power resources it generates welfare losses in terms of low output thereby leading to lower income and economic wellbeing.
Unemployment can either be voluntary or involuntary voluntary in the sense that one chooses not to work because he or she has means of support other then employment. On the other hand involuntary unemployment exists when persons who are eligible and willing to work at the prevailing rate of pay are unable to find work or employment [anyanwa 1995].

In recent times the incidence of unemployment in Nigeria has been a wide spread cutting across all faces of age groups education state and geographical entities.
The unemployment problem was more rampant in Nigeria in the 1980 than any other period for instance the unemployment rate rose from 4.3 in 1976 to 64 in 1980.it was also recorded between 5.3 and 64 during 1980 to 1985 period.
Government and policy makers are increasingly finding it difficult to grapple successfully with youth unemployment this high rate of unemployment can be blamed on lack of adequate provision for job creation in development plans the over expanding educational growth and the desperate desire on the part of youths to acquire university education irrespective of course and course contents as a result a number of skills acquired from the university appear dysfunctional and irrelevant [Celine 1999].

The socio economic effect of unemployment includes fall in national output increase in rural urban migration waste of human resources high rate of dependency ratio poverty all sorts of immoral acts and criminal behavior e.g. robbery etc all these can categorized into no or low economic growth the social effect of unemployment brings to light the need to proffer possible solution to salvage our nation Nigeria.

In view of the prior observation unemployment has constituted a problem to the attainment or economic growth of the world in general but most especially in less developed countries.

The seriousness of unemployment has been enumerated to be youthful which constitutes the productive forces of the economy thus making the achievement of high economic growth practically a mirage in Nigeria within the given span of time [C B N 2004].

It is glaring that in 1960 and early 1970 Nigeria Malaysia Indonesia and other had similar income per capital GDP growth rates and underdeveloped political structure but today the Asian tigers have escaped underdevelopment and poverty because of the way their country was managed thereby leaving Nigeria behind [Ekpo 2004].

The economic measures adopted for long in Nigeria like structural adjustment programme could not crest the problem of unemployment to the economic growth of Nigeria economy instead 70 of Nigeria live below poverty line.
Using the time series data on unemployment in Nigeria between 1975 and 1996 two historical developments evolved out of the economic history of the country first the year 1974 which coincided with the oil boom and secondly the year 1986 which manifested the recession period following the oil boom. The understanding is that unemployment was still present during the oil boom in the 1980

However economists were bothered about the cause of reducing unemployment by government policies whether the trade off is worth it and whether the inflation rate that will be allowed will be favorable enough for the economy.

1.4 OBJECTIVE OF THE STUDY.

This study is guided by the following hypothesis:

Unemployment in Nigeria has been an issue of interest. A lot of policies and measures have been adopted to control unemployment, because it wastes away the productive years of the active population, moreover, the study will help reduce the declines of our economic growth.
It will provide information to the Nigerian government and youth who ignored agriculture in pursuit of white collar jobs.
Furthermore, it will provide useful information needed by government to fight unemployment and help create employment opportunities in Nigeria. And finally the study will serve as reference material for further studies.