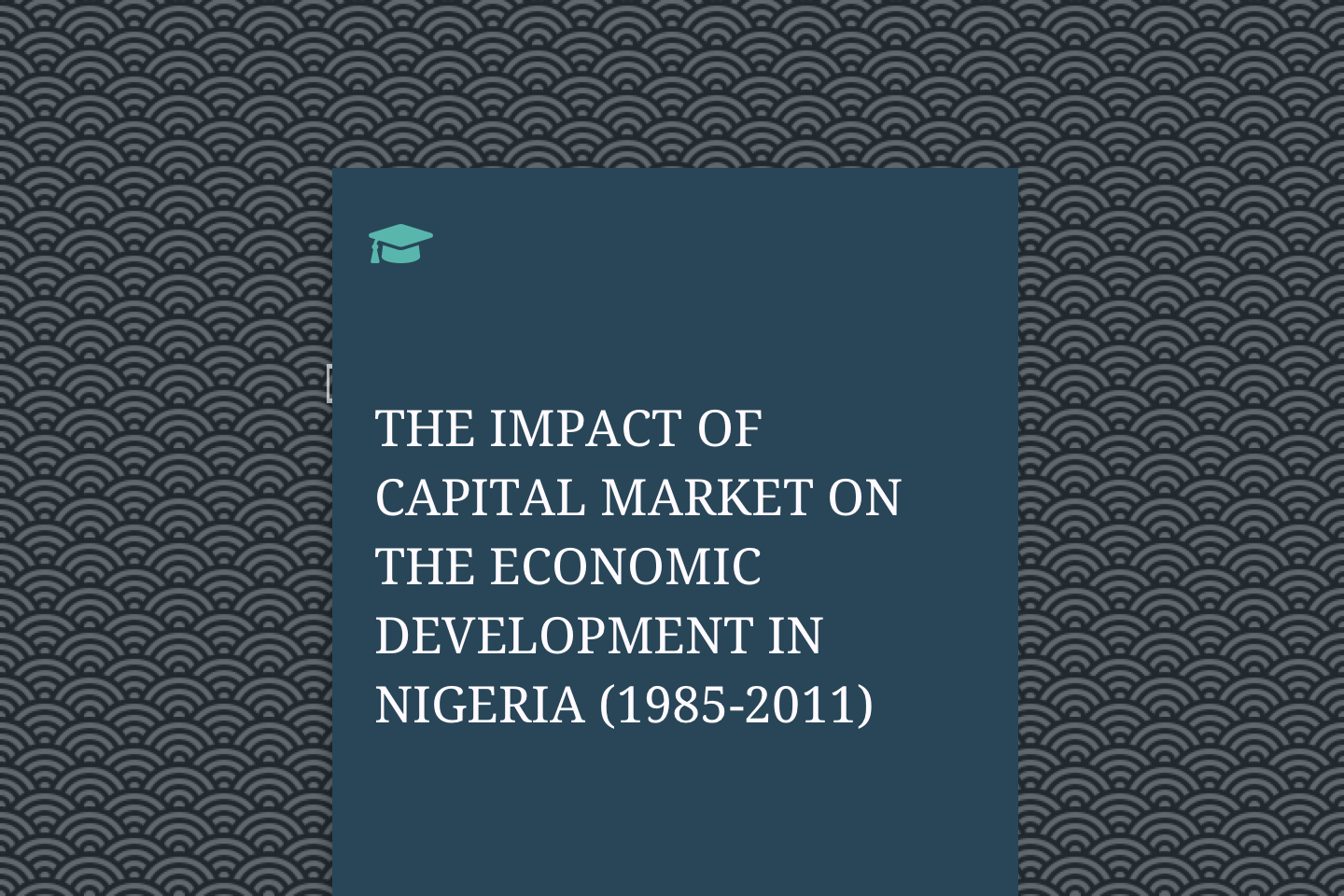 Many efforts have been made towards understanding the relationship between capital market and the economic development of Nigeria. The capital market of every economy is setup for the attainment of specific objective which includes economic growth and stability; Data were collected and analyzed using ordinary least square analysis. These include F-test, to determine the significance of the entire regression plan, T- test to test for the significance of the individual variables and the second order test, which include test for autocorrelation, normality test and heteroscedasticity. The result of the study shows that the capital market has a positive and significant impact on the country‟s economic development. On the strength of this evidence, this work recommends that government should introduce policies to motivate and encourage the market. If these recommendations are efficiently implemented, the effectiveness of the Nigerian capital market will be enhanced.

1.1 BACKGROUD OF THE STUDY

Every economy seeks to appropriate industrial base to move the economy from a traditional and low level of production to a more automated and efficient system of mass processing and the manufacturing of goods and services. For this level of development to be attained, there must be a sound financial system which would serve as the back bone of such an economy. If this is pursued, acquiring industrial capabilities would be easily attained since it is considered as the economic development. As a result of the importance of the financial system in developing industrial capabilities every economy seeks avenues to acquire them one of such avenues is raising funds through the capital market.

The capital market deals with instrument or long term securities with maturity period longer than one year such as bonds, debentures and equity stocks. The capital market in Nigeria has been a major source of finance to the government; industries etc. to meet their longer term capital requirements such as financing for fixed investments on buildings, plants bridges etc. The use of capital market reduces over reliance on the money market, assist in promoting a solvent and competitive financial sector as well as fostering a healthy stock market culture. The importance of the capital market cannot be under estimated.it is the fundamental instrument of capital formation in any countries economy since no instrument takes place in a vacuum. A well-developed capital market ensures the availability of capital funds for investment and developing project usually takes a long gestation period which the funds from the money market cannot sustain. This implies that the absence of an efficient capital market in an economy would result in shortage of long term funds and would harm investment and hence militates against economic development.

An active capital market aids the mobilization of savings for economic growth and development. encourages the efficient allocation of resources through changes in wealth ownership and composition, catalyzes the creation of a healthy private sector, and facilitates the promotion of rapid capital formation (Iyoha 2004).Nigeria has a growing capital market, which has since its inception served as a veritable source of long term funds to finance investment. Some of the reasons for promoting an active capital market in Nigeria include

The objectives of the capital market at any point in time are geared towards attaining an appreciable development and growth in the economy and providing a channel for engaging and mobilizing domestic savings for productive investment. Apart from its fund mobilization function, it performs intermediary role by making it possible for those who have surplus funds to be able to loan it out to those in need of it for productive purpose.

In the last two decades, the link between financial intermediation and economic growth is a subject of high interest among policy makers and economics around the world, There have been attempt to empirically asses the role of capital market and economic development.This have varied in methods and results.
Adjasi and Biekpe(2005) found a significant positive impact of capital market on economic development in counties classified as upper middle income economics.in the same way(Chen et al 2004) elaborated that the nexus between capital returns that is stock returns and output growth and the rate of stock return returns is a leading indicator of output growth various studies such as spears (1991 Levine and zerous,1998, comincioll,1996 and Demirquc-Kunt 1994) have supported the view that capital market promote economic development with well functional financial sector or banking sector, capital market can give a big boost to economic development. (Behadur and nevpone2006) concluded that stock market fluctuation predicted the future growth of any economy and causality is found in real variables.

This study is aimed at assessing the activities of the Nigerian capital market and the impact it has to the development of the Nigerian economy. The following questions are therefore raised to guide the study;

According to Nwana 1998 „‟A hypothesis formulation is aimed at delimiting the direction of searching for evidence everywhere, anywhere .it is based on the above premise that the following hypothesis is formulated to guide this work
Hoi There is no significant impact of capital market on the economic development of the country.
HO2 There is no significant relationship between the Nigerian capital market and banking system.

The importance of a developed and liable capital market in the economic development of Nigerian cannot be our emphasized. This analysis is important as it would examine to what extent the capital market has contribution to economic development of Nigerian.
The result from this study is expected to be of great importance to individuals, investors, and business. Firms and the entire economy as a whole.it will also help to enlighten the members of the public on the meaning of stocks and shares inculcating in them the savings and investment habit.
However, the government and policy makers would find this research handy, especially in area of policy formulation in restricting the
Capital market, for an improved performance of the aimed at boosting investors to patronize the stock exchange market in other to enhance their effect on the economy. This study is also expected to identify some problems encountered in the capital market by participants and suggest possible means of rectifying them.

The focus of the study is limited to the activities of the Nigerian capital market. And will cover the period 1985- 2011 .this study has no doubt encounter problems in terms of both internal and external validity. Like any other research study, this too has some limitations. The problem encountered in the case of embarking on this research is in two dimensions, finance and time.
Finance is required to enable the researcher to travel from one place to another to obtain necessary data for the study and also to produce a readable copy.
Time is also another constraint as the research had to apportion her limited time in ensuring the research becomes successful.