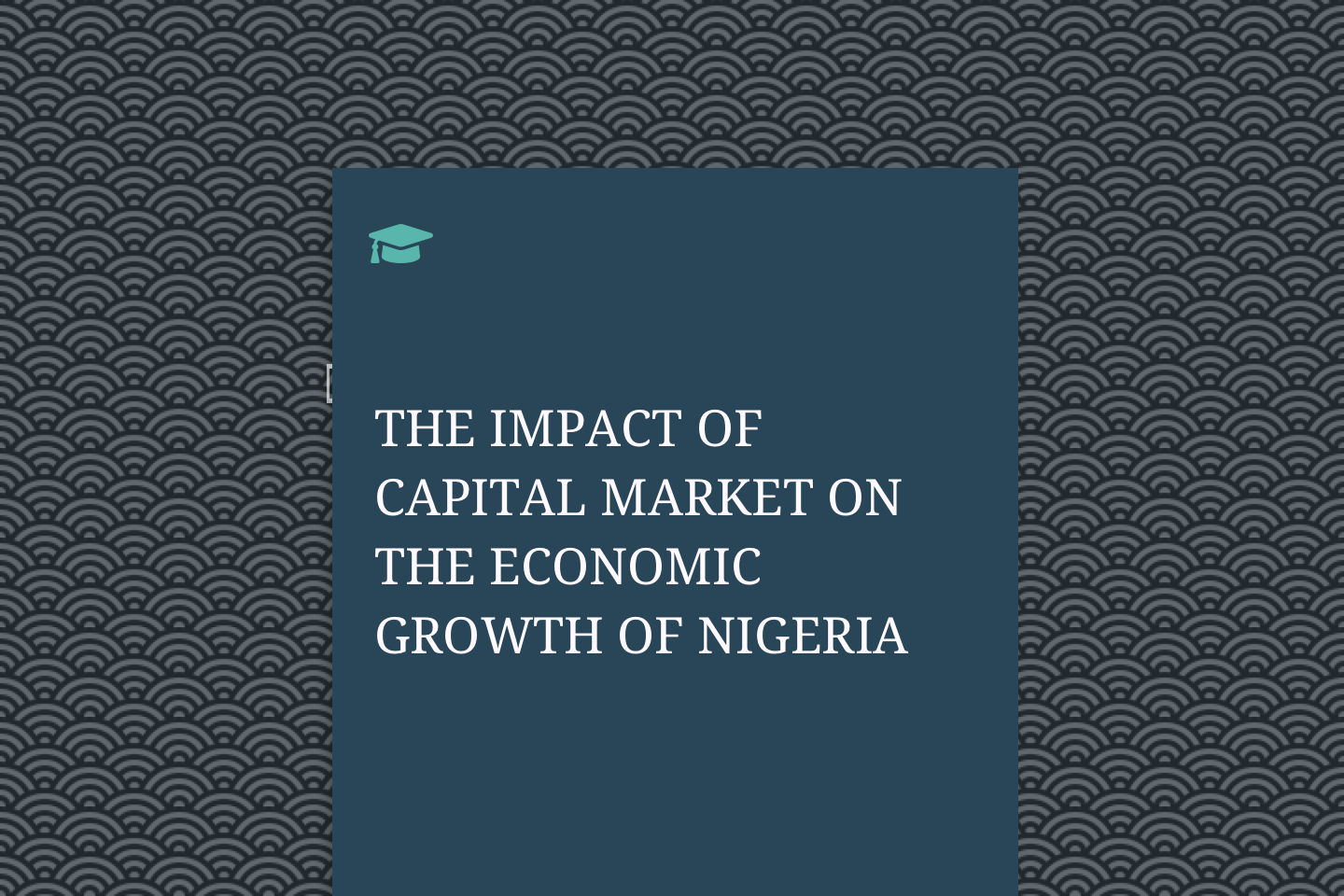 This research work was embarked upon with a view to determine the impact of the capital market on the economic growth of Nigeria. The capital market was set up to achieve specific objectives which would boost the economy such as encourage domestic savings and increasing the quantity and quality of investments. The capital market offers access to a variety of financial instruments which are very essential for government and other institutions in need of long term funds. The data was obtained from the CBN Statistical Bulletin (1980 – 2009) and analyzed using ordinary least square analysis. The result shows that the capital market has a positive and significant impact on the country’s economic growth. It also revealed the limited contribution of the market to the development of the industrial sector.

The capital market is a highly specialized and organized financial market and indeed essential agent of economic growth because of its ability to facilitate and mobilize saving and investment. To a great extent, the positive relationship between capital accumulation real economic growths has long affirmed in economic theories (Anyanwu, 1993).

Success in capital accumulation and mobilization for development varies among nations, but it is largely dependent on domestic savings and inflows of foreign capital. Therefore, to arrest the menace of the current economic downturn, effort must be geared towards effective resources mobilization. It is in realization of this that consideration is given to measure for the development of capital market as an institution for the mobilization of finance from the surplus sectors to the deficit sectors.

The development of capital market in Nigeria, as in other developing countries has been induced by the government. Though prior to the establishment of stock market in Nigeria, there existed some less formal market arrangements for the operation of capital market. It was not prominent until the visit of Mr. J. B. Lobynesion in 1959, on the invitation of the Federal government, to advice on the role the Central Bank could play in the development of local money and capital market. As a follow-up to this, the government commissioned and a set up the Barback Committee to study and make recommendations on the ways and means of establishing a stock market in Nigeria as a formal capital market. Acting on the recommendation of the committee, the Lagos Stock Exchange (as it was called then) was set-up in March 1960, and in September 1961, it was incorporated under Section 2 cap 37, through the collaborative effort of Central Bank of Nigeria, the Business Community and Industrial Development Bank (Alile &Anao, 1990). With the establishment of the Central Bank of Nigeria in 1959 and the coming into existence of the Lagos Stock Exchange in 1961 and Subsequently, the Nigeria Stock Exchange by an Act in 1979, a sound foundation was laid for the operation of the Nigerian Capital Market for trading in securities of long term nature needed for the financing of the industrial sector and the economy at large. After the incorporation of the Lagos Stock Exchange, it was granted further protection under the law and its activities was placed under some sort of control by the government, hence the passing of the Lagos Stock Exchange Act. However, the Lagos Stock Exchange was only operational in Lagos. By the mid 70’s, the need for an efficient financial system for the whole nation was emphasized, and a review by the government of the operations of the Lagos Stock Exchange market was advocated. The review was carried out to take care of the low capital formation, the huge amount of currency in circulation which was held outside the banking system, the unsatisfactory demarcation between the operation of Commercial Banks and the emerging class of the Merchant Banks, and the extremely shallow depth of the capital. In response to the problems mentioned above, the government accepted the principle of decentralization but opted for a National Stock Exchange, which will have branches in different parts of the country. On December 2nd 1977, the memorandum and article of association creating the Lagos Stock Exchange was transformed into the Nigerian Stock Exchange, with branches in Lagos, Kaduna, Port-Harcourt, Yola and now in Federal Capital Territory (FCT) Abuja and some other cities. The history of Nigeria Capital Market could be traced to 1946 when the British colonial administration floated a N600, 000 local loan stock bearing interest at 3¼% for the financing of developmental projects under the Ten-Years Plan Local Ordinance. The loan stock, which had a maturity of 10-15 years, was oversubscribed by more than N1 million, yet local participation of the issued was terribly poor. Certainly, potential fund abound in Nigeria, but the overriding consideration in this project is to examine the impact of the capital market in harnessing and mobilizing these resources (fund) to generate economic growth in the country and consequently economic development.

There is abundant evidence that most Nigerian businesses lack long-term capital. The business sector has depended mainly on short-term financing such as overdrafts to finance even long-term capital. Based on the maturity matching concept, such financing is risky. All such firms need to raise an appropriate mix of short- and long-term capital (Demirguc-Kunt& Levine 1996). Most recent literatures on the Nigeria capital market have recognized the tremendous performance the market has recorded in recent times. However, the vital role of the capital market in economic growth and development has not been empirically investigated thereby creating a research gap in this area. This study is undertaken to examine the contribution of the capital market in the Nigerian economic growth and development. Aside the social and institutional factors inhibiting the process of economic development in Nigeria, the bottleneck created by the dearth of finance to the economy constitutes a major setback to its development. As a result, it is necessary to evaluate the Nigerian capital market.

The broad objective of this study examined the activities and performance of Nigerian capital market. The specific objectives of the study are as follows:
1. To evaluate the performance of the capital market in relation to the economic growth in Nigeria.
2. To make recommendations as to how the operations of the market could be improve to boost economic growth and development of Nigeria.

The hypothesis that would be tested in the course of this research is stated below as:
H0: That the capital market operations have no impact on Nigerian economic growth.

The economy is a large component with lot of diverse and sometimes complex parts; this research work only looked at a particular part of the economy (the financial sector). This work did not cover all the facets that make up the financial sector, but focus only on the capital market and its activities as it impacts on the Nigerian economic growth. The empirical investigation of the impact of the capital market on the economic growth in Nigeria was restricted to the period between 1980 and 2009 due to the non-availability of some important data.

1.8 ORGANIZATION OF THE STUDY

The study is divided into five (5) chapters and organized as follows:
Chapter one form the introduction part, this is where the main theme of the research is given. It comprises of the statement of the problem, objectives of the study, research questions and hypotheses, significance of the study, scope and delimitation of the study and organization of the study.
Chapter two is the literature review of the impact of capital market on the economic growth of Nigeria.
Chapter three forms the research methodology which includes sources of data, method of data analysis and model specification.
Chapter four is the data analysis while chapter five includes the summary, conclusion and recommendations.