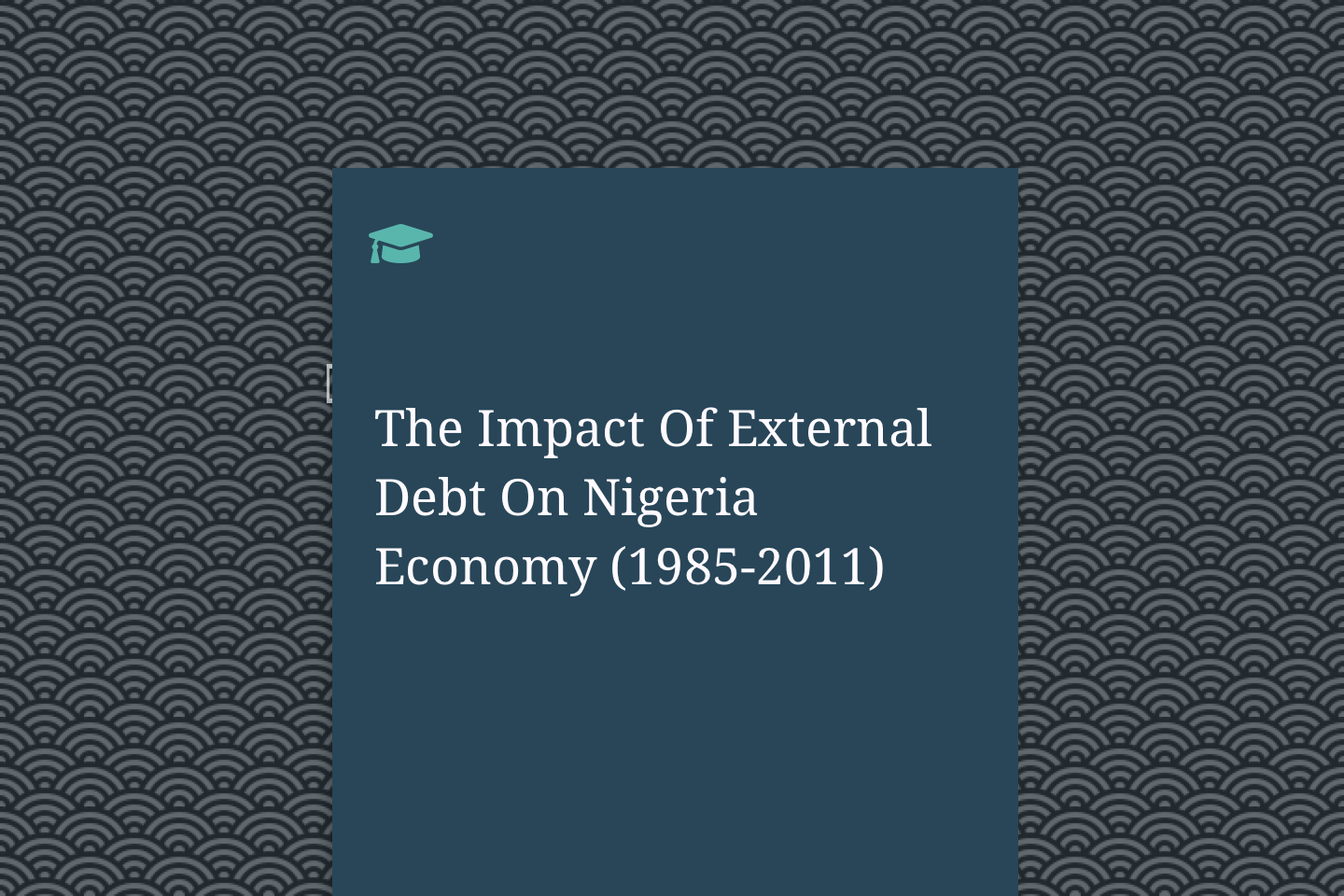 This work evolved out of the zeal to provide an immense understanding of the Nigeria economic of debt. The broad objective of this study was to evaluate the impact of external debt on the development of the Nigeria economy within the life-span of 1985-2011. The models in this study was used to evaluate the developmental relationship between the independent variables and the dependent variables. The data were sourced from the Federal office of statistics, CBN statistical bulletin 2011, and international monetary fund (IMF). The ordinary least square method (OLS) was employed in the cause of study. Also, the Augmented Dickey Fuller test (ADF) revealed that the variables are reliable for forecasting while the use of OLS was most appropriate for the study in terms of goodness of fit and significance of regression coefficient. The outcome of the analysis revealed that increase in external debt positively affects the economic development of Nigeria while increase in external debt services positively affects economic development in Nigeria. Thus; conclusion was made that external debt rises rapidly because loans were secured for dubious projects and private pockets rather investing the loan in productive ventures by increasing exports. And by recommendation, government should incur external fund for developmental projects and as well monitor effectively the use of external funds so as to ensure the development of Nigeria economy.

Most economic development literature described the 1950‘s and 1960‘s as ―Golden Years‖, which marked the rate of development in developing countries whose development at the period was just high and internally generated. Also, the less developed countries (LDCs) increased their investment with little or no reliance on external resources (Daily Sun; 2007).

On the contrary, most of the development experienced in 70‘s was ―debt led‖. This was a result that these countries maintain persistent current account deficits, which led to the borrowing from the international money and capital market to finance projects. Based on this premise, external borrowing has always been resorted to because of the shortfall between domestic savings, seeking external funds to bridge gaps is not desirable which is so because external debts acts as a major constraints to capital formation in developing nations.

In most cases, debt accumulates because of the servicing, requirements and the principal itself. Considering the above, external debt becomes a self-perpetuating mechanism of poverty aggression, over exploitation and a constraint on development in developing countries (NakatamianhHerca; 2007). However like most developing countries of the world; Nigeria relies substantially on external funds for financing its development projects, e.g. Iron and steel mills, roads, electricity generation, plants etc. such external funding usually takes the form of external loans. In the early years of political independence(i.e. 1960 through 1975), the size of such loans was small, the rate of interest concessionary, the maturitywas long-term and the source was usually multilateral in nature. For instance, Nigeria‘s external debt in 1960 was about $150million, however, beginning in the year 1978, the situation changed. Nigeria, at the lure of the international financial institutions started to borrow huge sums from private sources at a floating rates and with shorter term maturities (Business New; 2009).

In 1978 ―JomboLoan‖alone which is borrowed from the international capital market (ICM) was estimated to sum of $1billion which represented over 100% of Nigerians Gross Domestic Product (GDP) for that year. The situation precipitated a debt-crisis that progressively worsened overtime. However, it follows that debt is an integral part of all economies; developed, developing or undeveloped. (Bannock Baxter and Rees, 1972). By 1986, Nigeria had to adopt a WorldBank/International Monetary Fund (IMF) sponsored Structural Adjustment Programme (SAP), with a view to revamping the economy and making the country better-able to service her debt.

Furthermore some state government resorted to imprudent borrowings from external source. This was to finance all sorts of projects of doubtful viability. Sooner than expected, the debt problem was marked to have started in the 1980‘s. in fact, the external debt escalated from N8,8194million in 1982 through to N10,577.7 million in 1985. In 1987, it was N100,787.6million. it further moved up to N328,051 million and N633,144.4million between 1991 and 1993 respectively. By 1995 and 1996, Nigeria had an outstanding debt of N716,865.6million and N617,329.0 million respectively (CBN statistical bulletin, 2004). In Nigeria, the debtsituation is really a big problem because these debts mount are accumulated annually and we find that the more debt we accumulate, the higher the debt services payment and less resource. This in turn reduces savings for investment purposes. Such a situation portrays an imminent danger for the present and future of the country. This study therefore tends to focus on the impact of external debt on Nigeria economy and also provides lasting solution to external debt problems.

Nigeria which was a net lender to organisations like IBRD, IMF, Paris Club etc. is today one of the highly indebted countries to these organisations. External debt when effectively and efficiently utilized is meant to provide some investments. The returns from these investments will be used in the settlement of the debt. But in Nigeria, the reverse is the case. The debt is incurred to service and enrich the private pockets of our leaders,on behalf of the entire citizenry(Vanguard; 2004). Consequently upon this, debt servicing has become one of the most consuming elements of Nigeria‘s annual earnings. The Nigeria‘s unfavourable balance of payment (BOP) istoday a function of some variables amongst which external borrowing is rated the most influential factor. The BOP problem in turn leads to high rate of inflation, import and dependence. Nigeria‘s external debt has no doubt put pressure on the economic recovery and growth of the country. This research has actual impact of the external debt on the economy of Nigeria.

The study is important because it will help to know the amount of external debt of the country and proffer solutions on how to control the debt of the country based on the findings and recommendation of this work. It will stand to help the policy makers, governments, researchers and the students of related discipline. The research work will serve as a guide to policy makers to enable them in making and implementing appropriate laws that will guide the rate at which money is being borrowed from other countries and also negotiate the maturity period to limit the extent of external debt. This is implementing proper policies. This work will be relevant to government in the area of debt management. Thus; it will help the government to know the organisations and countries whose maturity period are longer and also charge rate of interest and then borrow from them so that the loan can be repayable as and when due. This will also benefit the researchers and the students of related discipline by serving as a reference material primarily geared towards expanding the boundaries of knowledge.

The study will focus on the Nigeria external debt and its impact on the economy. The study will cover the period of 1985-2011. This period is particularly pertinent for the study and the nation‘s economic history because it covers a period of deficit financing and budgeting as well as recessionary period involving sharp nose diving cum dwindling in general societal aggregate demand which emanated as a result of low level of savings in Nigeria economy which necessitated the undesirable macro-economic problems and economic distress and fluctuations which may come up inform of economic glut(dumping of unsold socks of goods due to lack of patronage by the consumer, i.e. low or no effective demand of the commodities or stock of the goods by consumers).
The period witnessed the introduction of multifarious types of policies (fiscal and monetary policies) and some programmes to bring the fluctuating Nigeria economy to normalcy sees to achieve economic growth and development which are the goals of macro-economic. In particular, the period witnessed the period of bank consolidation/recapitalization policy, deregulation, industrialization and open door policy. All these were designed to bring the sagging economy in equilibrium.

The Effect Of Urbanization And Unemployment On The Nigerian Economy