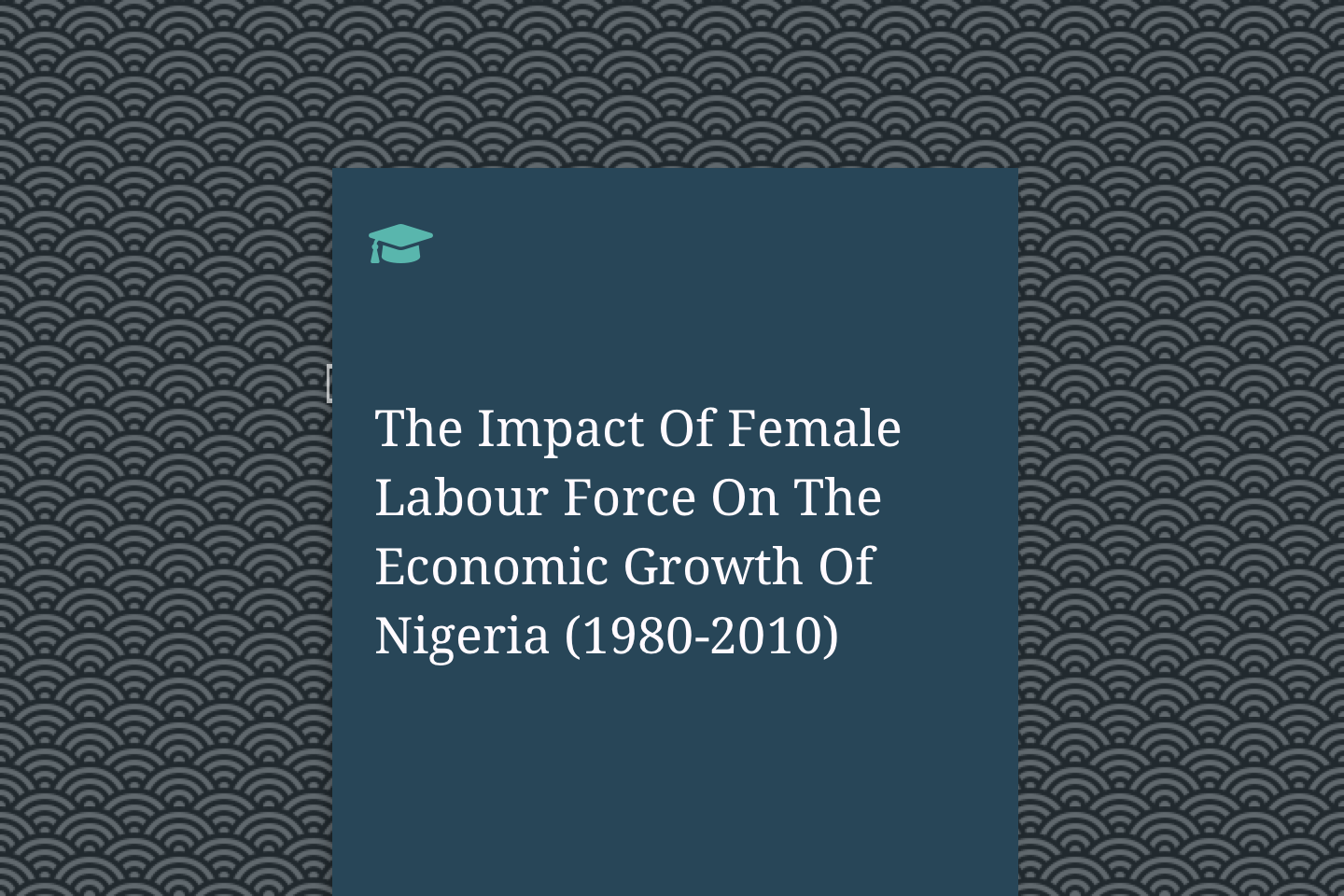 A country’s labour force consists of everyone of the working age, typically above the age of seventeen and below the retirement age of sixty- five. They are characterized by those who are actively employed or seeking employment. The focus of this study is to determine the impact of female participation in labour force on the economic growth in Nigeria between the periods of 1980- 2010. The research also seeks to investigate the determinants of female contribution to economic growth in Nigeria. The objective of this study is to determine the relationship between female labour force and economic growth in Nigeria (GDP).The data used was sourced from the National Bureau of Statistics of various years as well as the CBN Statistical Bulletin (volume 21) December, 2010. The ordinary least square method (OLS) was chosen as the estimation tool because of its advantage over other estimation techniques.The major finding was that female labour force employment has a positive impact on the gross domestic product (GDP) of the Nigeria economy. Based on the findings, some recommendations of policy and suggestions have been made.

Gender differentiation and productivity are critical issues that are central to the socio-economic life of any country. Women contribute half or more of the country’s population, but they contribute much less than men towards the value of recorded production both quantitatively in labour force participation and qualitatively in educational achievement and skilled manpower (Olukemi, 2008). The extent to which these phenomena are discussed varies from country to country. While the developed countries have practicallygraduated from endemic problems of gender differentiation, their less developed counterparts are still battling it. A close overview of world economies show that women have often been looked down upon in terms of their ability to contribute to the economic well- being of their families which invariably has some correlation to a nation’s economic growth. The under-utilization of female labour as well has obvious implications for economic welfare and growth. In particular, the participation of women in labour force appears to depend much more on the social environment than is the case for men.

In the light of the above, arguments have risen in favour or against women in their roles towards economic growth and development. Traditional African Gender Theory suggests that women are less important such that they are relegated to the upkeep of domestic chores. It is therefore not surprising that the clamors for more birth were and are still being emphasized till date. The theory holds that women should in no way be found rubbing minds with their husbands in family meetings, and community gatherings. Traditionally, women were regarded as homemakers, who oversee and coordinate the affairs and activities at home. Previously, in Africa, women remained at home while their husbands and sons went out to the farm to work. However, women are never idle at home. They are engaged in manual processing of food crops and other farm produce in addition to their housekeeping duties. The neo-classical are in support of this idea as they failed to acknowledge society induced differences between men and women in the face of economic growth. Thus, they remarked that markets clear automatically given pareto efficiency and that what is economically rational at the individual level is also economically rational for the society as a whole.

Despite these extreme views, there exists a clarion call all over the world for increased women participation in the socio- economic development of nations. This is because of the roles that women play in economic growth and development. Danish (2001) notes that women opportunities to contribute to the development of societies need should be improved.Otherwise, economic growth in developing countries will be constraint and the ability to care for the environment in these countries reduced. One of the studies conducted by World Bank in 2003, shows that investments in women yield large social and economic returns, adding that young girls and boys should have the same opportunities to lead full and productive lives.

With the advent of Western education, industrialization and paid employment, men as well as women drifted into the modern sector of the economy. And today, there are visible changes in the perception of women, principally because they have greater opportunities for education than before. It is therefore not in doubt that economically empowered women play veritable role in household decision- making, with greater bargaining power to increase spending on education, health and other areas of family needs. Such women especially the economically sound ones, have better opportunities for entrepreneurship and to earn higher wages, lifting themselves and their families out of poverty.
In the view of the above, scholars have made enormous enquiry in how women have fairedvis- a-vis contributions to economic growth. This work therefore, is a follow- up research work that establishes the role women play in Nigeria’s economic growth.

Gender biasness in the face of socio- economic strata of the world seems to be no respecter of any economy. As a result, Nigeria has its own share of the incidence. Right from the pre- colonial traditional Nigeria society to its modern state, women have often being discriminated upon in affairs that led to deplete their contribution to economic growth. Such discrimination is often perceived in grounds that they are the weaker sex.

In Nigeria today, women are excluded from certain occupational categories due to formal barriers as well as informal barriers to entry. The formal barriers which continue to hinder the entry of women in such occupational categories include; lack of educational or technical training, labour laws and training customs. The informal barriers include; customs and religious practices, difficulties in combining domestic and labour market activities, management and worker attitudes etc. few Nigerian women are engaged in top management cadre of formal sector establishments simply because majority of them lack the educational qualifications necessary for such positions or due to gender discrimination. For instance, only about 6.2 percent of those who were employed as either General Managers or Managing Directors in 1986 were women (Ojo, 1997), while 32.6 percent of those who participated in the 1995/1996 National Youth Service Corps Programme were females (Ojo, 1997).

Onyejekwe, J.C (2001) states that about half the Nigerian population are women and have always played important economic roles. He however asserts that these roles were negatively affected by earlier development schemes, particularly community development programmes, which to a large extent ignored the potential of local knowledge systems for coping with change. Similarly, the historical pattern of development in Nigeria is one in which investment is skewed in favour of industrialization in urban areas resulting in rural areas lagging behind in development. Mijiudadi (1993) cited in Fabiyi et al (2007) estimates that women are responsible for 70% of actual framework and constitutes up to 60% of the farming population in rural areas.
In other to boost women’s participation in economic affairs, a number of women progrmmes have been launched in the country including; “the famous better life for rural women of (1987)”, “Gender action Plan of the World Bank of (2007), “Millennium Development Goals”, “Women for Change Initiative founded by the First Lady, Patience Jonathan”, “Women’s Pride Restored through Unilever empowerment Programme of (2011)”, and “Empowering the Nigerian Women by the Jonathan Presidency” etc.

Despite these efforts, the contribution of women towards economic prosperity is still seen as grossly beyond expected capacity.

The questions now are;

It is the aim of this study to:

1. Examine the impact of female labour force on the economic growth of Nigeria.
2. Suggest ways of combating the hindrances that still prevent women from actively participating in the labour force.
3. Find out the various ways in which women have contributed to Nigeria’s economic growth.

We have the following hypotheses:

1.5 RELEVANCE OF THE STUDY

This study will serve various purposes which include:

1. It shall reveal the various ways in which female productive activities contribute to Nigeria’s economic growth.
2. It shall study the various factors that influence women productivity in Nigeria.
3. It therefore shall be of usefulness to subsequent researchers as a reference material.
4. It shall spur further research effort in this regard.

This study is designed to have a general view of female and labour output in Nigeria and shall make use of data spanning from 1980- 2010 to make empirical assessment.

This work has a number of challenges which include inadequate finance, lack of sufficient materials and secondary data. This may affect the quality of this work.

The Effect of External Debt on Economic Growth of Nigeria

The Effect Of Urbanization And Unemployment On The Nigerian Economy