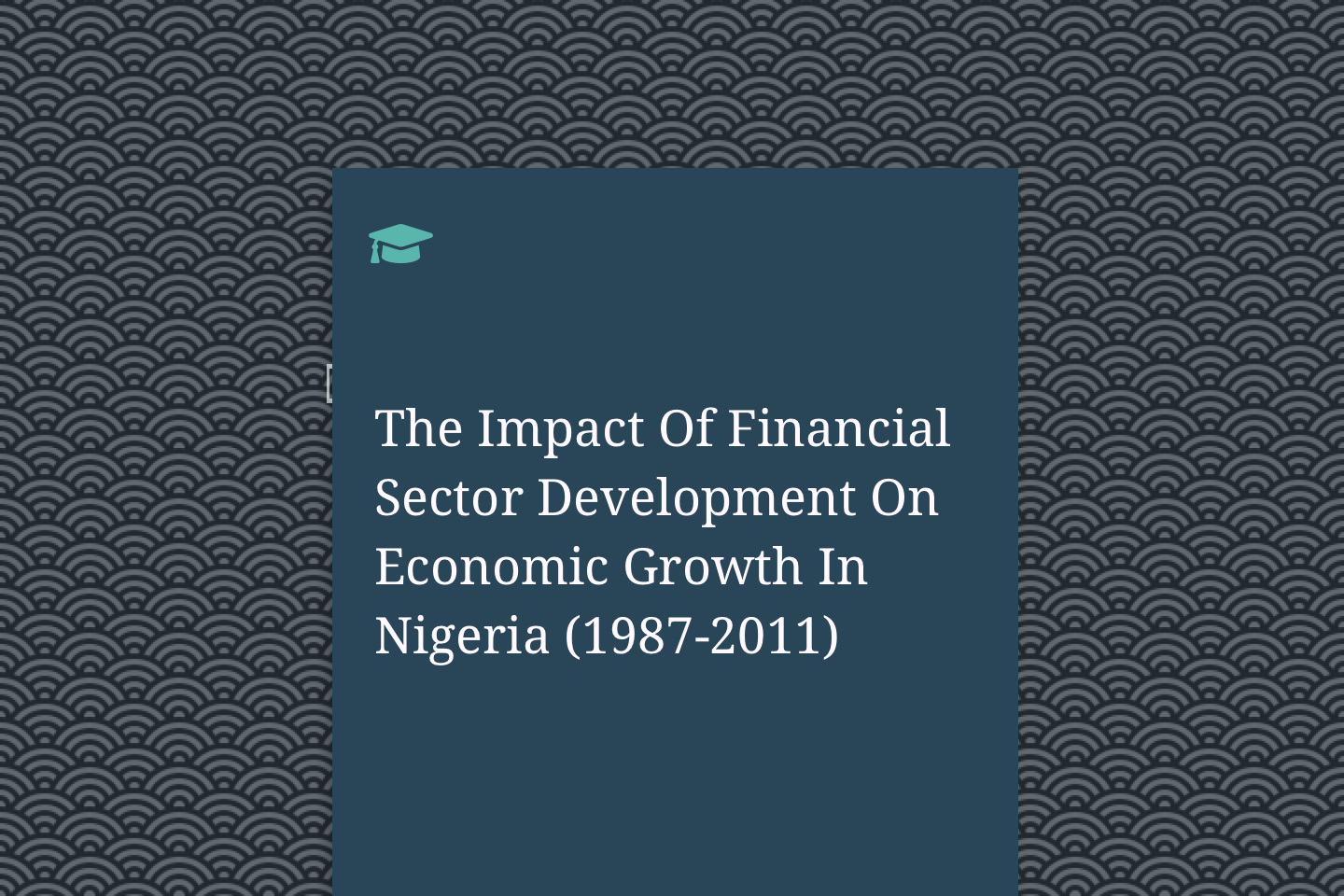 Furthermore, the importance of financial institutions in generating growth within the economy has been widely discussed in the literature, various schools of thoughts having views and ideas.
Schumpeter (1911), identified bank’s role in facilitating technological innovation through their intermediary role. He believed that efficient allocation of savings through identification and funding of entrepreneurs with the best chances of successful implementing innovation products and production process are tools to achieve this objective.

Several scholars therefore (McKinnon 1973, Shaw 1973, Fry 1988, King and Levine 1993) have equally buttressed the above postulation about the significance of banks to the growth of the economy.

In assessing the relationship, a larger number of recent empirical studies have relied on measures of sizes or structures to provide evidence of a link between financial system development and economic growth.
They used macro or sector level data such as the size of financial intermediation or of external finance relative to GDP and found that financial development has a significant impact on economic growth.

For the past few decades, theoretical discussions about the importance of financial development and the role that financial intermediation play in economic growth have remained controversial and thus occupied a key position in the literature of development finance.

However, in spite of recent findings that financial development and economic growth are clearly related, this relationship has occupied the minds of economists overtime; although the channels and even economists of causality have remained unresolved in both theory and empirics (Fitzgerald, 2006).
Bayoumi and Melander(2008),coupled with King and Levine (1993) established that the banking sector’s development in Europe was not only correlated with economic growth but was also a cause of long-term growth and as such we can also assert that the financial sector growth(growth of the banking sector), has a strong influence on economic growth in Nigeria.

Finally, the purpose of this paper is to analyze the relationship as well as analyze the results of the public sector so far and to ascertain whether it offers and provides an efficient and/or effective means of solving the problems facing economic growth in Nigeria.
A recent study however indicates that the banking sector plays a more important role than it was believed earlier (World bank, 1996; Almeyda, 1997).

The banking sector (financial sector) is acknowledged to have huge potentials for employment generation and wealth creation in any economy.
In Nigeria, the sub-sector has stagnated and remained relatively small in terms of its contribution to gross national product (GNP) and creation of job opportunities.
However, several problems have limited the growth and effective contributions of the financial sector to the economic development in Nigeria. The growth of the real sector could be determined by the financial sector performance and this could impact on economic growth. But the financial system has been affected by several bouts of reforms and challenges. A number of banks were pruned down through the recapitalization programme.

Among the recapitalized banks five chief executives were accused of fraud and replaced hence the inconsistency in operation.

Equally, microfinance banks and insurance companies had their capital base reviewed. More recently, the central bank of Nigeria and its monetary policy committee reviewed the interest rates upwards to dampen the rate of inflation in Nigeria (ogboi, 2011). These are among several other reforms in the sector. More so, according to the Manufacturing Association of Nigeria (MAN) cited in Amefule(2011), Nigeria lost 1.9 million owing to harsh operating environment including finance related problems.

From the foregoing we are poised to answer the most fundamental questions about the impact of financial sector development on economic growth in Nigeria.

1.5. SIGNIFICANCE OF THE STUDY.

Since the emerging of Nigeria as a nation in 1960 and her becoming a republic in 1963, virtually all facets of Nigerian economy have undergone huge change, while some sectors/areas of the economy changed for the better, some are still in their very bad condition.
Therefore, the most significant aspect of the study is the importance of both the commercial banks sectors and financial sector growth to the economic growth of Nigeria.
Hence, this research would provide an in-depth analysis, which would enable the populace to fully understand the nitty-gritty of the financial sector and ultimately enable them to be very much familiar with growth trends in the economy.
Furthermore, the development of the financial sector has been given priority by the Nigerian government in the successive development plans.
A review of the problems facing the financial sector is quite indispensible. Such a review will enable the sector face the ever-increasing demand upon it; and with such amazing knowledge we can therefore foster economic growth by adopting suitable economic policies.
Finally, since the essence of every research work is to build upon and add to the existing bank of knowledge, this study promises to build upon as well as add substantially to the deposit of knowledge and relative to area of financial sector growth as well as growth in the economy.
It would also help us understand the strong bond between financial sector and economic growth.

1.6. SCOPE AND LIMITATION OF THE STUDY.

The study encompasses the role and contributions of financial system/sector on the economy. Also the study does not consider other sectors of the economy but explicitly devotes all its energy on the activities of the financial sector and how it stimulates growth.
Equally, in spite of all odds, this work contains informations which are reliable and authentic.
Other possible limitations of the analysis is that credit ratio used in the study do not capture financial development that takes place outside of the banking system such as the stock or bond markets. However, it might be of lesser significance since financial development comes about mostly with the banking sector and other channels are still not very developed.
Demirguc-Kunt, Levine (2008), asserts that a more general shortcoming, common for all studies of finance growth nexus, is the fact that according to the theory, financial institutions induces economic growth by reducing information and transactions costs, monitoring borrowers, managing risks or facilitating exchange of goods. Researchers, however, do not posses very good measures to assess how well a financial system provides these kinds of services to the economy.
Thus, the empirical proxies of financial development do not correspond that closely to the theory.
Finally, the study will cover a period of 25 years (1987-2011), and it is only based on this time frame that we shall base our analysis. Hence anything outside the time frame is unaccounted for in this study.