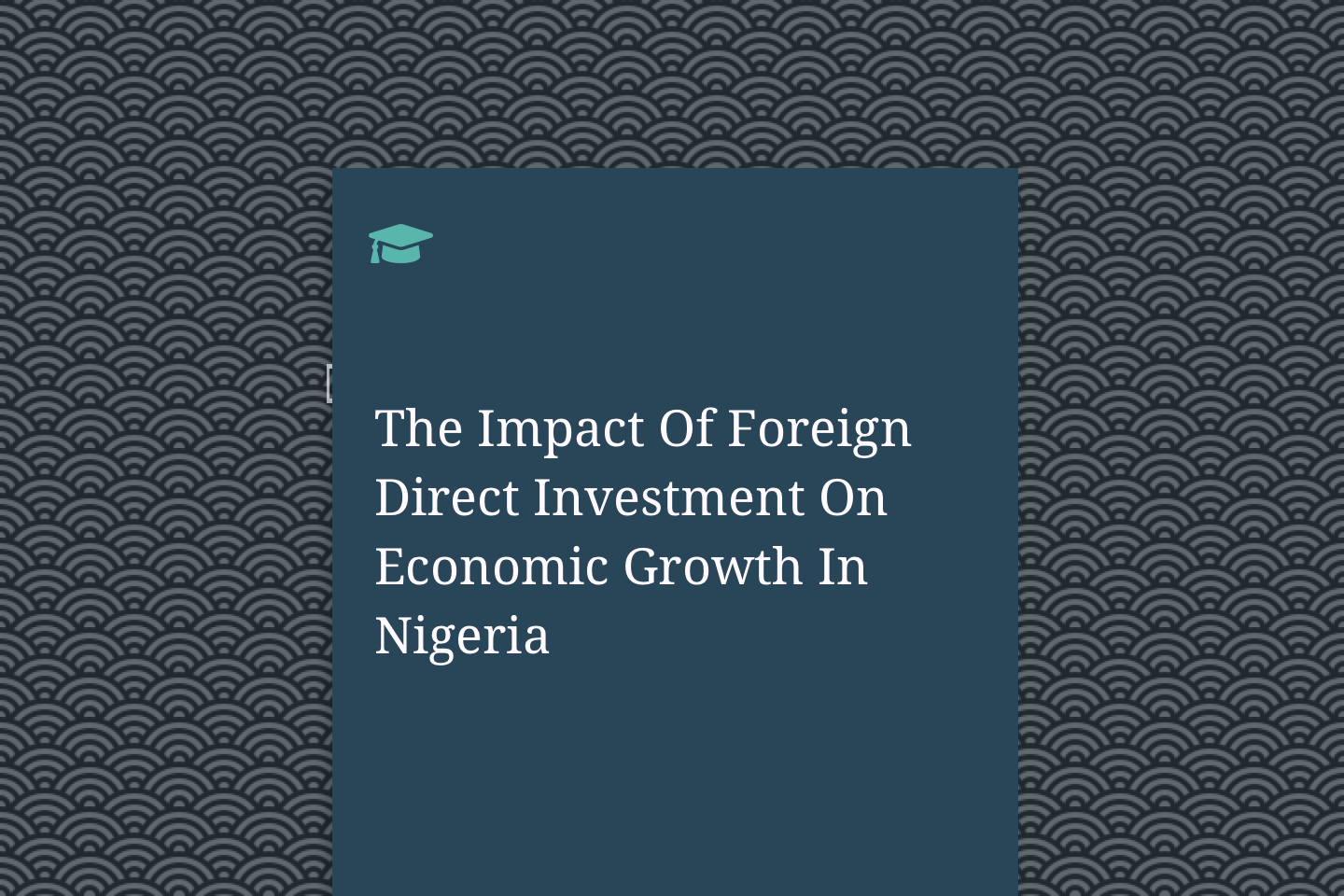 Foreign Direct Investment has been widely described as an indispensible vihicle of economic growth, Variuos reseachers have tried to advocate foreign direct investment as a tool for employment generation, transfer of technological skills, manpower development and increased foreign dexchange earnings.
This study was carried out to determine the impact of FDI on economic growth in Nigeria. The study made use of the ordinary least square (OLS) method of estimation in determinig the impact of FDI amid other variables on economic growth from the period of 1980 – 2010. This study further reveals that inflation rate have a negative influence on economic growth. Recommandation based on the findings made are geared towards a restructuring and redirecting of foreign direct investment if successfully put in place would yeild great benefits to economic growth in Nigeria.

1.1 Background of the study

Over the years countries of the world have mutually helped each other in growing and developing. This has been made possible through the instrument of international trade. This trade is necessitated by the fact that no country is an island therefore is naturally endowed with all her needed resources.
In line with this trade between the advanced countries and the developing countries is necessary so that the advanced countries with their technical knowledge can transform the raw materials of the developing nations into finished goods.

In Nigeria context successive government supported by the strong industrial and academic forces have identified this machinery of international trade as an important tool for growth and development. Using some e measures like giving credit consideration provision, basic infrastructure and right environment for production and investment, quality tax concession and favourable lending rates.

Over the last decades, the macro-economic performance of Nigeria can be described as being chequered. The average GDP growth rate of 3.95% achieved between 1970 – 2008 translates into a low growth rate of 1.49% in per capita income terms. This rate of growth in per capita terms is insufficient to reduce in a significant ay the level of poverty which remains the primary goal of developing policies in Nigeria. Ajayi (2006) notes that the savings rate of Nigeria is lower than that of most countries and far lower than the required investment that can induce growth rates that are capable of alleviating poverty.

Recent studies however show that Foreign Direct Investment is what is needed to bridge the gap of savings and investment that exists in African and in nigeria particularly. Prior to the 1970‟s FDI was not seen as an instrument of economic development the perception of FDI as parasitic and retarding the development of domestic industies for export promotion had engendered hospitality to multi –national companies and their direct investments in many countries.

However, the consensus now is that FDI is an engine of growth as it provides the much needed capital for investment, increased competition in the host countries industries and aids local firms to become more productive by adopting more efficient technologies or by investing in human and or physical capital. Foreign Direct investment contributes to growth in a substantial manner because it is more stable than other forms of capital (Ajayi ,2006). While the FDI growth link is still ambiguous most macroeconomics studies nevertheless support the notion of a positive role of FDI within particular economic conditions. There are three main channels through which FDI can bring about economic growth. The first is through the release it affords from the binding constraints of domestic savings. In this case, foreign direct investment contributes to savings in the process of capital accumulation. Second FDI is the main source through which technology spillovers lead to an increase in factor productivity and efficiency in the utilization of resources which leads to growth . third FDI leads to export as a result of increased capacity and competitiveness in domestic production. This linkage is often said to depend on another factor called „‟Absorptive Capacity‟‟ which include the level of human capital development, type of trade regimes and degree of openness (Ajayi 2006; Borenztein et al 1998).

The proposition made in this paper is that FDI facilitates economic growth on one hand and on the other hand economic growth attracts FDI into Nigeria. In other words FDI and economic growth are endogeneousely determined in Nigeria.
Consequently the objective of this study is to analyse the edogeneouse nature of the effect of FDI on economic growth in Nigeria using data between 1980-2010. The aim is to find out if there is a directional relationship between economic growth and FDI‟s inflows into Nigeria.
This study justified particularly for the following reasons: the study recognizes the growing evidence from cross countries studies that the relationship between FDI and economic growth is endogenous. That is FDI engenders growth and growth attracts FDI. The study does not simply assume endogenity but actively tests for endogenity of FDI and economic growth in Nigeria, using appropriate econometric methodologies. The study is also significant because it differs from other studies in the scope. This gives the study an edge because it examines the FDI growth relation in the near contemporary context, checking account of past trends and recent developments in the global financial market for capital flows.

Finally the study adds to the literature by specifically examine the interaction between FDI and human capital and infrastructure with the view for examining whether FDI affects growth by itself or through an indirect interaction term.

Interestingly there are some arguments about whether FDI is really beneficial and how significant this benefit is to economic growth some critical proponents have said that in the cost of benefit analysis context, the less accuring to the host countries as a result of FDI outweighs the guaranteed benefit. Typically, multinational corporations in developed countries have actually become a threat to host countries as they are now subversive and exploitative.
Also, multinational corporations are in reality the representation of the global corporation around countries as they see the state as the only unit of analysis in international relation. These arguments above and indeed many more have necessitated a critical look and finding out of whether the often acclaimed benefits of FDI are significant or not.

Dependency theorist has also focused on how FDI of Multinational Corporation distorts developing nation economies. In the view of these scholars, distortion includes the crowding out of national firms rising unemployment related to the use of capital intensive technology and a marked loss of political sovereignty. Developing nations generally depend on the foreign investors for the finance capital that they need. Multinational corporations carryout much of this foreign investment and many developing countries also borrow money from international financial markets by selling bonds, but they usually must pay higher interest rate (the cost of borrowing). Foreign investors may refuse to buy bonds if they fear that a government may not be able to repay its loans.
However the basis of this study is the general notion that FDI investment generates considerable benefits to the host country by helping to accelerate her development efforts

The general and foremost objective of this study is to examine and determine the impact of Foreign Direct Investment on the Nigerian economic development specifically. Other aims of this research work includes;
1. Determine whether foreign direct investment has actually been contributing significantly to economic growth in Nigeria.
2. To ascertain the magnitude of the impact of FDI on economic growth in Nigeria.

This research work focuses on FDI and the economic growth in Nigeria and covers a period of time between 1980-2010. This period was chosen to sufficiently determine the long –run impact of FDI on economic growth.

This research will help policy makers‟ access or find out the extent to which FDI has gone in influencing economic growth in Nigeria. It also serves as an eye opener for the Nigerian government in the area of FDI and also a reference material to researchers.