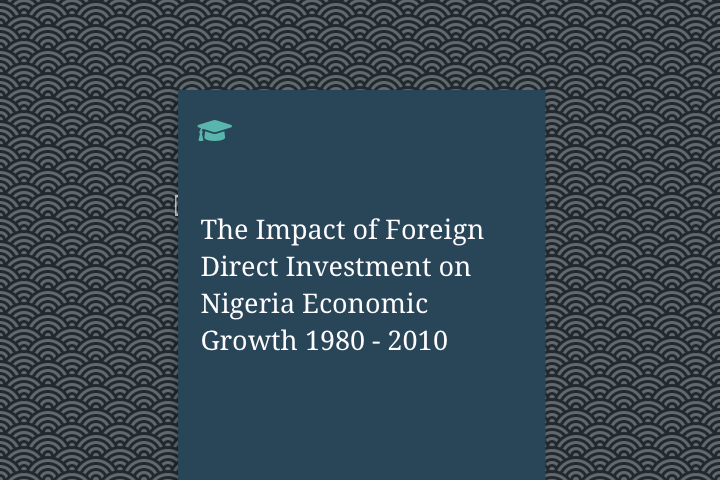 The study examined the impact of foreign direct investment (FDI) in Nigeria over the period 1980 to 2010. The study employed multiple regressions in analysis, using the ordinary least square (OLS) regression technique. The result at this revealed that FDI impacted positively on the growth of the Nigeria economy over the period under study. Based on this, the study recommended the provision of adequate infrastructure and policy framework that will be conducive for doing business in Nigeria, so as to attract the inflow of FDI necessary to stimulate growth.

One of the major economic problem in less developed countries (LCD) is low capital formation to finance the necessary investment for economic growth.
Capital was one regarded by most economists as the principal obstacle to economic development and this is lot attentions were paid to capital formation. The role of capital in economic growth is still regarded as very crucial both the theory of ‘big push’ and the concept of ‘vicious cycle’ all a test to the crucial role of capital in the growth process. The theory of ‘big push’ simply state that the stagnant and undeveloped economies need huge and sudden injection of large capital from foreign direct investment. However in the literature FDI is found to be related to export growth while human capacity building is found to be related to FDI floe.
Most studies on FDI and growth are cross country studies. However FDI and growth debates are country specific. Among Nigeria studies like those by otepola(2002) oyeyide(2005), Akinlo(2004) examined the importance of FDI on growth for several period and the channel through which it may be benefiting the economy.
In the literature there exist a direct positive link between export growth and the growth of an economy. This growth in export can further be traced down to the level of investment which in most cases can be domestic or foreign investment.
This is so given that foreign capital remains the sure best option of filling the saving investment gap where it exists. Given this fact assessment will be based on the existing link among investment, export, exchange rate and economic growth.
These problems therefore raise the following research question.

H01: FDI has no significant impact on the growth of the Nigeria economy
H02: The nature and magnitude of FDI on economics growth in Nigeria cannot be determined.

1.5 SCOPE/THE LIMITATION OF THE STUDY

Finding from the study will be of immense benefits in a number of ways and to different groups of persons.

UNEMPLOYMENT AND INFLATION IN NIGERIA