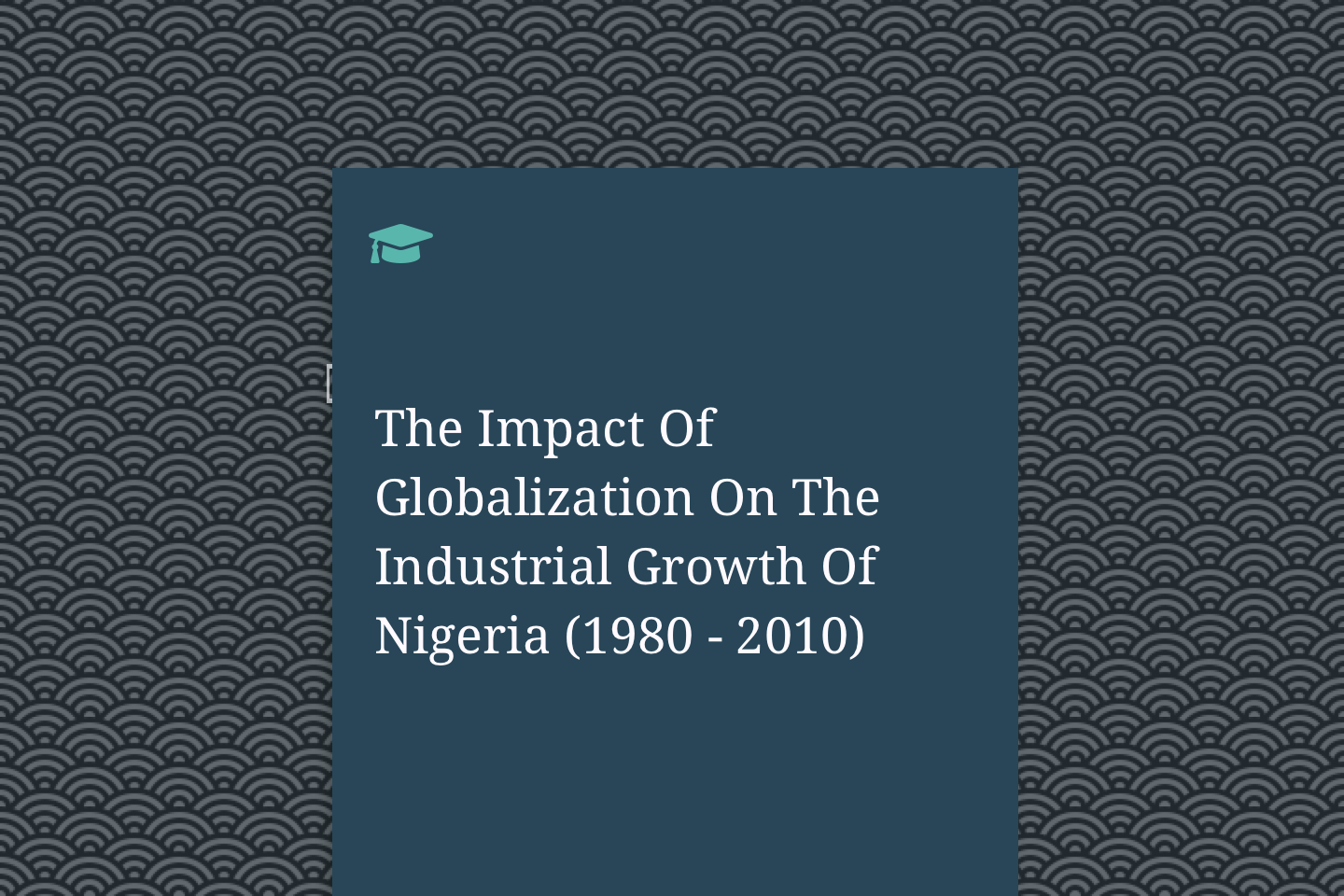 This study is meant to investigate the impact of globalization on the Industrial Growth of Nigeria covering the range of 31years (1980-2010). It is obvious that Nigeria as a country still depends on the importation of productive inputs despite all efforts to develop her local resources. Thus, the objective of this study is to determine the impact of globalization on the industrial growth of Nigeria. The study reveals that for Nigeria to benefit from globalization her productive capacity, economic structure, political stability, macroeconomic policy and technology should be enhanced. Since we found out that trade openness has a negative impact on industrial growth. Therefore, it should be handled with caution, policies should be directed to decrease trade openness, especially where Nigeria has a comparative advantage due to the fact that we have abundant labour, we should promote labour intensive method of production and export commodities to earn foreign currency for use in other sector. In that case, the government should take agriculture seriously and also encourage local producers by giving them incentives in the form of tax rebates.

Globalization has benefited the advanced countries at the expense of the less developed countries. To the Marxists, this is not surprising as they hold that globalization is a product of the capitalist. They argued that the capitalist system epitomizes exploitation, it involved class conflict and it is a system of unequal relation marked by an unequal exchange. It is a system where one group must benefit at the expense of the other. Thus globalization being of such a system is bound to be exploitative. Several scholars has traced the origins of globalization in modern times, others trace its history long before the European age of discovery to the new world. Some even trace the origins to the third millennium BCE. Since the beginning of the 20th century, the pace of globalization has intensified at a rapid rate, especially during the post cold war era. The term globalization has being in use since the mid-1980’s and since the mid 1990’s.However, the main originators of globalization can be traced to the classical economists that showed that trade can be beneficial to their nation. Globalization developed through the
Pre-capitalist era to the period of industrial revolution in England and evolved into what we are seeing today. The above quote underscores the government especially in developing countries to know the manner they pursue domestic economic policies. They should gear all the effort towards restructuring their economy to global economic changes in such a way that they will benefit from globalization.

In 2000, the international monetary fund (IMF) identified four basic aspects of globalization: trade and transactions, capital and investment movements, migration and movement of people and the dissemination of knowledge. Further, environmental challenges such as climate change, cross-boundary water and air pollution and over fishing of the ocean are linked with globalization. Globalization processes affect and are affected by business and work organization, economics, socio-cultural resources and the natural environment. The most Drastic evidence of globalization is the increase in trade and the movement of capital stocks, bonds, currencies and other investment from the period of 1950-2001. The volume of world’s export rose by 20 times and by 2001, world trade amounted to a quarter of all the goods and services produced in the world. In the early 1970’s only $10 billion to $20 billion in national currencies was exchange daily, by the early part of the 21st century, more than $1.5 billion worth of yen, Euros, dollars, pounds and other currencies were traded daily to support the expanded levels of trade investment which is as a result of globalization.

One could say that the crises in Nigeria’s tertiary institution arising from corruption, mismanagement as well as the devastating effect of the defunct structural adjustment. The present socio-economic and political condition of Nigeria on ground suggests that we will have a long way to go in the global competition of the 21st century. Also the Nigeria economy is made weaker by mono-cultural dependence and unfavorable terms of trade in its export trade as well as excruciating debt burdens. This problem can really make Nigeria not to benefit from the ongoing globalization process. The challenge is for Nigeria to use their enormous resources to build a strong, consistent self sustaining economy which will be competitive in the world market.
It is therefore, questionable whether Nigeria has been able to reap the benefit of globalization due to these weaknesses.

1) To what extent will globalization affect our economy and relation to other countries?

1) To determine the impact of globalization on industrial growth

1) Globalization has no impact on the industrial growth of Nigeria

The study covers the growth of the Nigerian industrial sector and it has been attested by globalization from the period of 1980-2010.