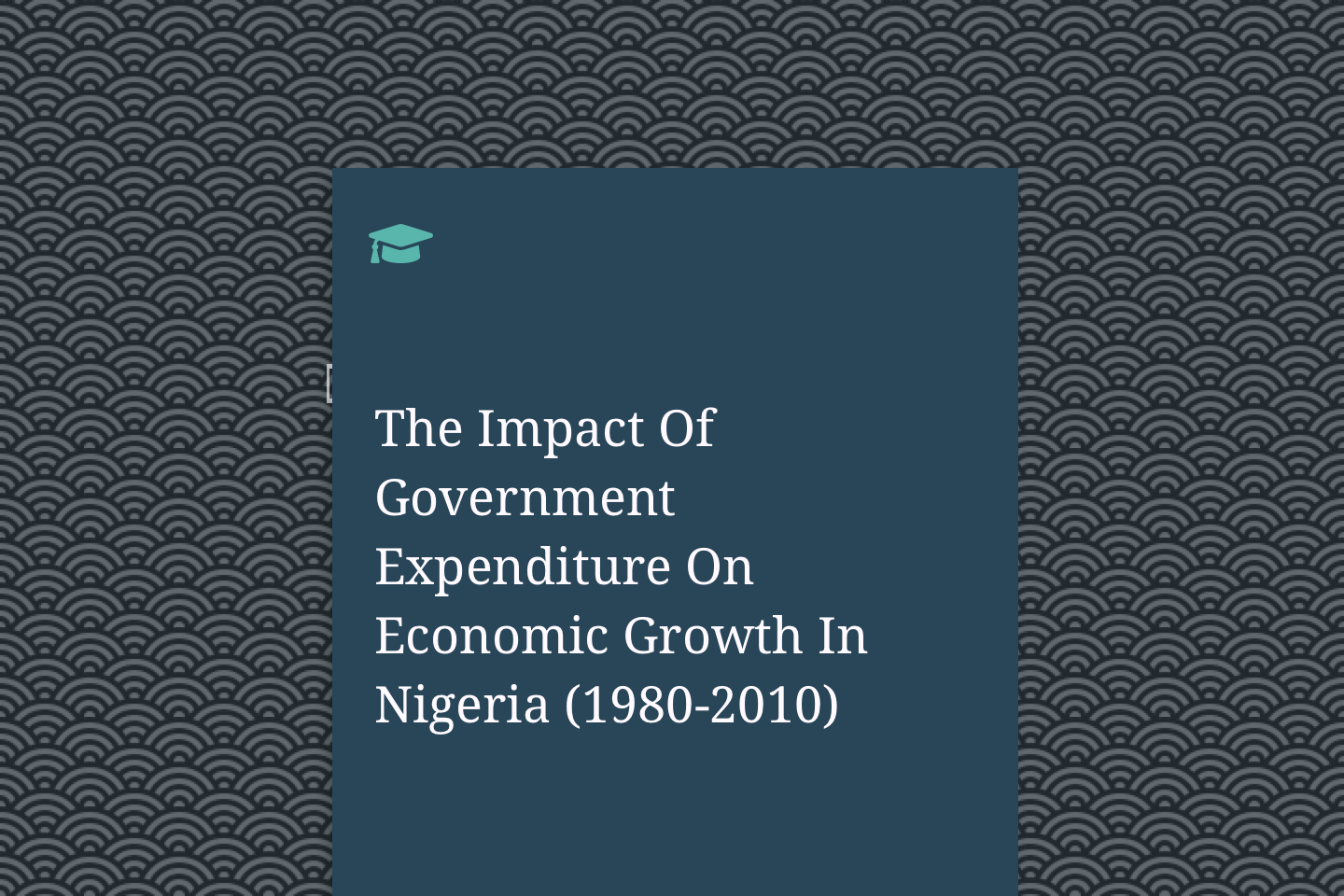 Government expenditure has served as a common means of using fiscal policy in many countries to achieve economic growth, expansion, development and transformation of the economic base. According to Musgrave (1989), He described public expenditure as tool used to achieve three distinct objectives which include allocation, distributive and stabilization purpose. Hence the public expenditure is a comprehensive set of expenditure policy measures designed to achieve certain set up macro-economic goals including maintaining equilibrium between the aggregate demand and aggregate supply (IMF 1993).

There are many irregularities in the country leading to public outcry and there was increasing fraud in government activities resulting from an inappropriate public finance planning and implementation mostly in Nigeria. Banks and businesses were collapsing which lead to crises in the external and internal activity of the economy. Some of the hills that caused this are corruption, indiscipline, lack of accountability which is the hallmark of the Nigerian society resulting to decrease in growth and development. Evident of unstable economic is fund in poorest wages and salary structure in the world. The inter-relationship effect is low productivity, avoidable, idle time, leading to loss of trade with advanced countries that have better finished products. The consequential effect is deficit in balance of trade and payment.

To this extent Sulieman (2009) observes that the size of government and also its impact on economic growth has emerged as a major fiscal management issue facing economies in transition. He notes that previous research focused mainly on the size of government in industrialised countries, (DC’s), trade dependency, the vulnerability to external shock and volatility of finance, the role and size of government become germane to adjustment and stabilization programme. Mitchel (2005) has argued that a large and growing government is not conducive to better economic performance.

For decades public expenditure has been expanding in Nigeria, as in other countries of the world. Akpan (2005) opines that the observed growth in public spending appears to apply to most countries regardless of their level of economic development. This necessitates the need to determine the need to determine whether the behaviour of Nigeria public expenditure and the economy can be hinged on wagner’s (1883) law of ever-increasing state activity or the Keynesian (1936) theory and Friedman (1979) or peacock and Wiseman’s (1979) hypothesis.

Consequently, this study dwells primarily on the expenditure side of public finance, and seeks to examine the relationship between government expenditure and economic growth in Nigeria for the period 1980 to 2010. Although this is in line with the previous empirical studies considered for the Nigeria situation. However in this work, this study employs econometric methodology after examining the fiscal factors in the link between public expenditure and economic growth.

Policy makers are divided as to whether government expansion helps or hinders economic growth. Advocates of bigger government argue that government programs provide value “pubic goods” such as education and infrastructure they also claim that increases in government spending can boost economic growth by putting money into people’s pocket. Proponents of smaller government have the opposite view. They explain that government is too big and that higher spending undermines economic growth by transferring additional from the productive sector of the economy to government, which uses them less efficiently. They also warn that expanding public expenditure leads to complication in implementing pre-growth policies, Such as fundamental tax reform and personal retirement accounts. This is because critics can use the existence of budget deficit as a reason to opposite policies that would strengthen the growth of the economy.

A major concern about the Keynesian school of thought is that; if government interference is an effective remedy for recession and has no side effect, why do so many oppose the policy of budgetary expansion? Firstly, a large public sector diminishes the business sector in personal and the sources of investment. It may be maintained that in time of recession, much of the workforce is not employed at all, and therefore, employment in the public sector does not come at the expense of the public sector.

Furthermore, in any growing economy, Government spending can be curtailed, the government can revert to a lower level of spending and personnel can be redirected to the business sector. However, while budgetary expansion is easy in recession, cut-backs during economic high are very difficult. No minister or director of a public institution relinquishes authority and budget easily. The result is an inflated and inefficient public sector even after the recession is over, and also a lower rate of growth in the private sector than its potential would indicate.
The relationship between public expenditure and growth is important especially for developing countries (Nigeria inclusive), most of which have experienced increasing level of public expenditure over time. There is evidence that, unlike in the case if developed countries, consumption is not negatively related with economic growth. This study shall empirical investigate this relationship in the case of Nigeria, with a view of explaining the reason behind the observed causality between them.

1.5 SIGNIFICANCE OF THE STUDY.

Whilst acknowledging the fact that this study is not the first of its kind using the Nigeria data. However, it shall go a little further than earlier works to correctly capture all known composition of public expenditure during the years under review to assess the impact of public expenditure on economic growth.
The relationship between government spending and growth is especially important for developing countries like Nigeria, most of which have experienced increasing levels of public expenditures over time. This has tended to be associated with rising fiscal deficit, suggesting their limited ability to raise sufficiently revenue to finance higher level of expenditure. Rising deficit tends to retard economic growth in developing countries because of the inability of such country to check inflation during deficit years. Thus, this study gives a good insight into problems created by rising government expenditure and how the same impact on growth.
Also, this study will enable policy makers to promote economic without recourse to huge deficit finance. This often results in inflation particularly when increase in government expenditure is no matched by corresponding increase in output. The bitter experience of the oil boom is still fresh in many minds.

1.6 SCOPE AND LIMITATIONS OF THE STUDY.

The growth of government spending and its impact on the performance of the economy shall be examined with data spanning from 1980 to 2010. Attention shall mainly be focused on exhaustive and productive government expenditure during the period under review.
One major limitation of the study is that the data to be used for the empirical analysis may be porous as such data are often manipulated for political reason. Besides, the study shall cover a limited number of years because of none availability of data. Another constraint to be faced in the cause of my study is time factor; the time frame of my work is going to hinder me from gathering as much information needed for proper analysis of the impact of government expenditure.
Another limitation to my study is finance, lack and insufficient finance for finding sources of information and acquisition of material for my study. But not withstanding of these limitations the study will serve its purpose.