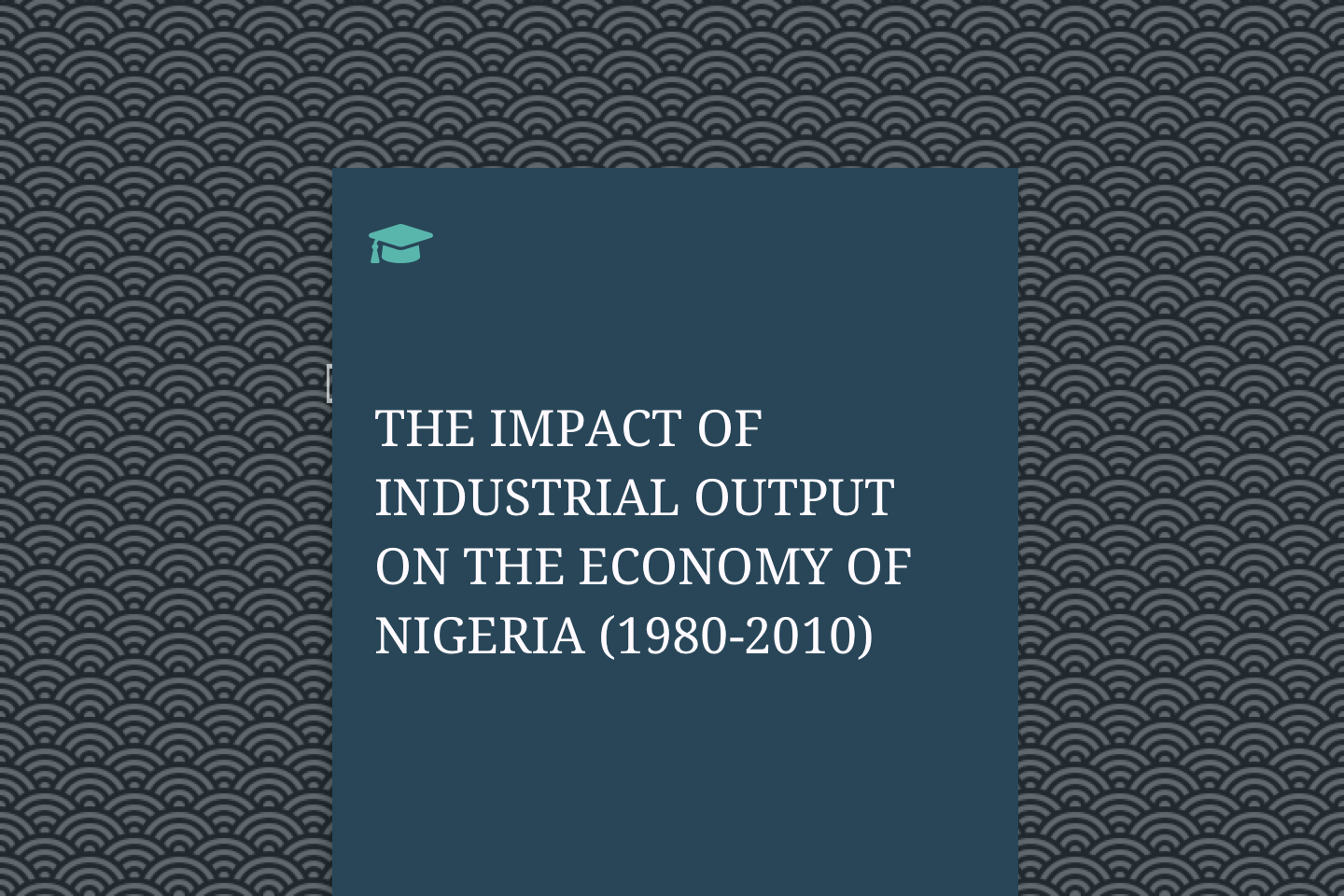 This research work is on the “Impact of Industrial Output on the Economy of Nigeria” between the period of thirty years (30) covered from 1980-2010. Impact of industrial output on the economy of Nigeria is a continuous discussion to every economy especially developing economics which will give rise to economic growth and development of a nation. Secondary data was used on PC Give 8.00 version package to regress the model with GDP as the dependent variable, and industrial output, savings, net foreign capital flow, and inflation as independent variables. The model explain that the influence of industrial output on economic growth is not statistically significant, though the sign obtained from its à priori expectation is positively related to GDP but does not hold strong enough. Savings has a positive relationship and also significant impact on the economy. Inflation has a negative relationship while net foreign capital flow is positively significant on the impact of economic growth. R-squared shows a 76% increase on the GDP. Based on the findings, it is therefore recommended that some policies is to be made in ways to improve the establishment of industries especially the manufacturing industries to encourage industrialisation of the Nigerian economy so as to contribute to the strengthening of economic growth in the nation’s economy. Tax incentives through subsidies and government expenditure relate to increase in output and positive impact on economic growth. Increase in savings will make money available for the economy through high interest rate and income adjustments from the monetary policy.

The oil boom of the 1970s made Nigeria neglected its agricultural and light manufacturing bases in favour of an unhealthy dependence on crude oil. In 2000, oil and gas export accounted for more than 98% of export earning and about 83% of federal government revenue. New oil wealth, the concurrent decline of other economic model fuelled massive migration to the cities and led to increasingly wide spread poverty especially in rural areas. A collapse of basic infrastructures and social services since the early 1980s accompanied this trend, (CIA, 2010).

By 2000, Nigeria‟s per capita income had plunged to about one quarter of its mid 1970s high, below the level at independence. Along with the endemic malaise of Nigeria‟s non-oil sector, the economy continues to witness massive growth of „informal sector‟ economic activities estimated by some to be as high as 75% of the total economy. The U.S United State remains Nigeria‟s customer for crude oil accounting for 40% of the country‟s total oil export, Nigeria provides about 10% of overall U.S oil import and ranks as the fifth-largest source for U.S imported oil and ranked 44th worldwide and third in Africa in factor output. (Adeolu B Anyawale, 1997).

Nigeria’s economy is struggling to leverage the country‟s vast wealth in fossil fuels in other to displace the crushing poverty that affects about 57% of its population. Economics refers to the consistence of vast wealth in national resources and extreme poverty in developing countries like Nigeria as a „resource course‟. 80% of Nigeria‟s revenue flow to the government, 16% covers operational cast and the remaining 4% goes to investors. World Bank has estimated that as a result of corruption, 80% of energy revenues, benefit only 1% of the population (Econspapers, hosted by Swedish Business School Orebro University).

Supervisor: Sir Uche least one length of its total population is employed in the industrial sectors of the economy. The manufacturing sector is to be dominant in terms of contribution to the Gross Domestic Product of any economy especially that of Nigeria (Auty, 1993).

1.2 Statement Of The Research Problem

The malfunctioning of industrial sector in a country is widely seen as a major handicap improving a country‟s economy and power pushing many governments to encourage or enforce industrialization (Wikipedia, free encyclopaedia). One of the problems bedevilling the Nigeria economy is that of output from its industrial sector of the economy. Admittedly, the decay in the manufacturing sector is the result of diverse factors that conspire to render many industries comatose (ill). The study is therefore necessary to enable a thorough investigation of the problems of the industrial sector especially that of manufacturing industries and various government agencies set up to provide credit facilities to the industrial sector to ensure continual growth of this sector for rapid economic development of this nation. In the light of this exposition, the research work is guided by the following question.

1. What is the impact of industrial output on economic growth of Nigeria?
2. What are the roles of manufacturing industries in the development of the Nigerian economy?

1.3 Objectives Of The Study

The broad objective of this study is to examine the impact of industrial on economic growth in Nigeria between the periods of (1980-2010).
The specific objective includes,
1. To appraise the origin and structure of Nigeria‟s manufacture sector.
2. To analyse industrial output and to determine the effect it has on the economic growth and development of the country.
3. To recommend possible solutions to the country‟s manufacturing sector.

1.5 Significance Of The Study

The researcher tends to find out the impact of industrial output on economic growth. The study covers a general contribution of manufacturing industries in Nigeria toward the attainment of economic growth from (1980-2010).

1.7 Methodology and Sources of Data

The validity and reliability of this research work will depend on the use of statistical data using simple regression model and the hypothesis setting that requires testing the validity of the analysis.
The researcher made use of secondary data obtained from the publications of the Central Bank of Nigeria, Central Bank of Nigeria statistical bulletin and the annual report of accounts as well as resource materials from the library and the internet.

1.8 Limitation Of The Study

A study of this nature cannot be researched without encountering constraints, some of which includes;
1. Finance: Financial constraint or inadequacy was the major limitation for this research to gather materials, logistics etc.
2. Data: There was a problem of acquiring all necessary data through the researcher has to rely on the ones available.