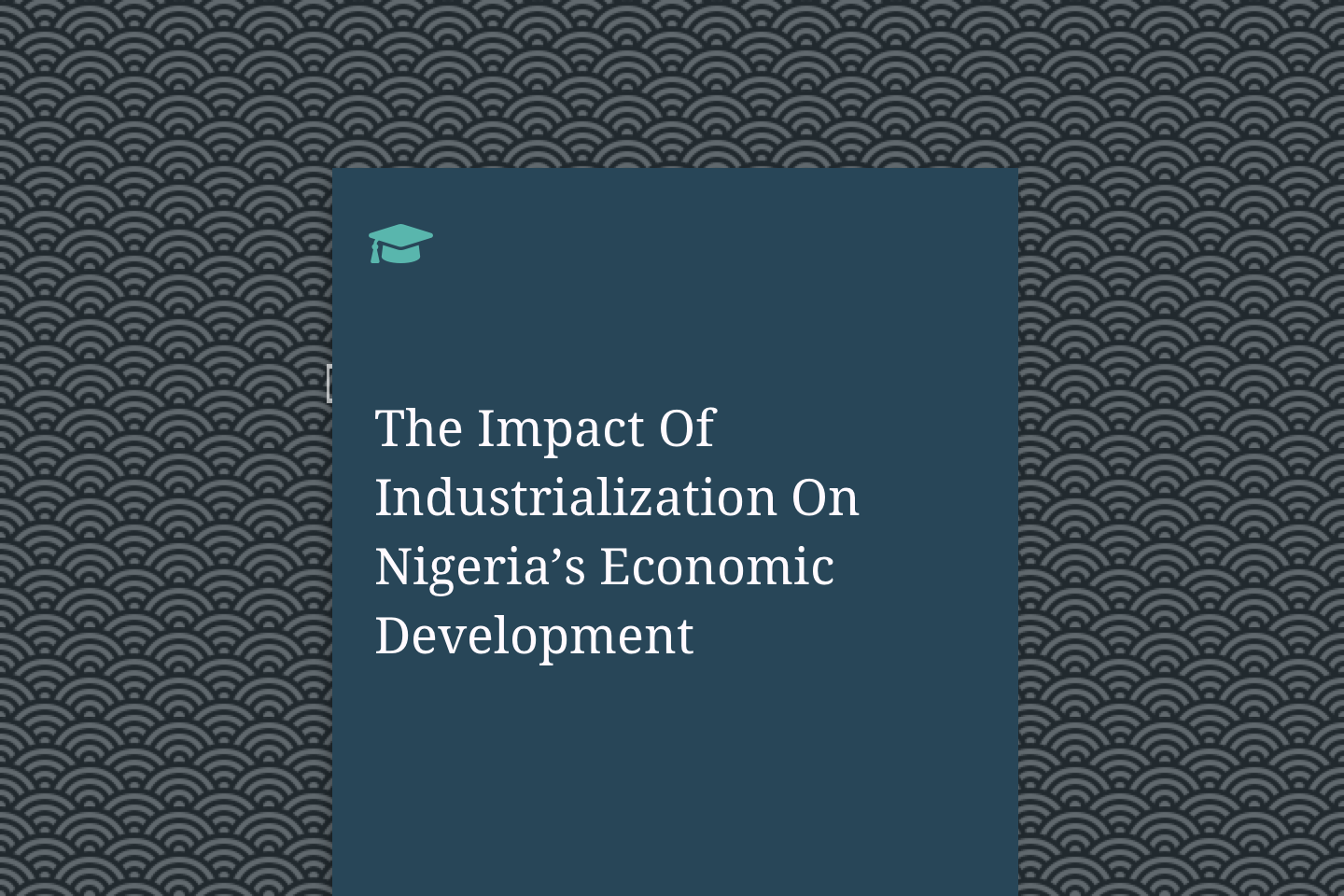 The industrial sector remains a strong sector of any economy, be it developed or developing. The developed countries are noted for their high industrial performance. The effect of the industrial activities on the economy of underdeveloped or developing nation si still under contention. It’s a fact that the economy will not grow without its industrial activities. These activities include: agriculture, manufacturing, mining and mineral processing and export opportunities for manufacturers. This study specifically analyze the impact of industrialization to economic development. It postulate that inspite of the effort of Nigerian government, Nigeria still show a stunted growth because of some constraints. In order to redress these problems, it was suggested that government should ensure policy consistency by allowing fiscal and monetary policies to work themselves out before a counter policy is introduced, also, industrial policy must be designed, reviewed and implemented in such a way that it will facilitate and not discourage investment in the sector. Based on the above, the prosperity of the nation to a large extent dependents on the development and sustenance of the industrial sector.

Generally, the industrial revolution which took place in Britain between the late 18th and 19th centuries has gotten much to do with the present set back on industrial development led to the factory process that metamorphosised into industrial production. Thus, history recorded that the industrial sector performance in Nigeria’s economic growth is as old as the nation itself. It dates back to the amalgamation of the southern parts of the country in 1914 to for the geographical land mass called Nigeria. By a representative of the colonial administration of Britain Lord, Fr. Fredrick Lugard.
As soon as independence was over, the government of Nigeria embarked on import substitution as an industrial strategy in order to reverse the problem of deficit balance of trade and fasten industrialization among other reasons.

To withstand the rising problems of the sector and economy in general, Nigeria embarked on structural adjustment programme (SAP) in 1986 on the assumption that structural adjustment programme (SAP) would corrects these problems. It has important implication on both the government and industry. It has brought government re-appraised of the regulatory environment, the structure of protection for local industries and the package of incentives available. For the private sector and industrialist in particular, SAP presented a new challenge which reported a more serious effort to control costs, increase production efficiency and remain competitive.

In the spirit of SAP, the second tier foreign exchange market (SFEM) was introduced in 1987 to allow market forces determine the foreign exchange rate, remove price distortions and thereby effect a more efficient allocation of resources.

Because of inability of the existing policies to live up to expectation, government therefore in 1988 adopted a new approach to industrial development, which gave prominence to the role of the private sector. To give effect to this management approach, government, in August 1988, established the national committee on industrial development (NCID). The strategic management of industrial development (SMID) or industrial master plan (IMP) is predicted on the need to organize a network of sectors (referred to as strategic consultative groups) around on industrial activities with the aim of having a comprehensive and perception view of the investment problems in particular line of industrial activity. The (IMP) seeks to minimize the problems of policy and programme consistency in the development of the nations industries.

A number of fiscal and monetary policies together with institutional reform measures have been undertaken by the Olusegun Obasanjo administration since transition in May 1999. With these measures, it is envisioned that Nigeria will be transformed into a major industrialized nation and an economic power.

Industrial sector encountered the problem of low price elasticity of export and lack of comparative advantage. This means that Nigeria share of foreign exchange market cannot appreciate despite the numerous incentives granted to the industrial sector.

The absence of an indigenous entrepreneurship class couple with other problems of multinational corporation affect the structure and influence the nature of utilization of scientific and technological labour for national development.

It has been observed that most industries in Nigeria have not realized their economic development goal even with the existence of manufacturing industries within the economy. Therefore this work researches the following objectives.
i. To determine the role of manufacturing industry in the economic development of Nigerian economy.
ii. To examine ways in which industrial sector in Nigeria can be made to play a better role towards high productivity for economic growth of Nigeria.

1.3 HYPOTHESES OF THE STUDY

1.4 SIGNIFICANT OF THE STUDY

The significant of this study lies in the fact that it will expose the extent to which industrialization has contributed to economic development of Nigeria. It will highlight some obstacles hindering increase in industrialization and industrial output in Nigeria.

This work will be relevant to entrepreneurs and government by directing them on the easiest means of embarking on industrial development plan. The relevance of this work also lies in the fact that it adds to the already existing literature on industrial output.

Furthermore, this research work will assist students of economics, government and real potential industrialist, investors and other related coursed. Other researchers will see this work veritable material in their field of study .

Finally, since no knowledge is a waste, readers of this work will find it interesting to know that high industrialization is the shortest route to economic development.

This research work deals on the impact of industrialization on Nigeria’s economic development. The date used is a secondary data, which was obtained from the publication of the central bank of Nigeria statistical bulletin and the amial report of accounts. The analytical tools employed on this research include t-test and regression analysis.

1.6 LIMITATIONS OF THE STUDY

A study of this nature cannot be done without some problems and as such it was constrained by many factors namely:
TIME: While embarking on this detailed research work, the researcher was having lectures, preparing for examinations, engaging in such activities and domestic work as well. So time was not enough for the researcher to perfect the work.
FINANCE: Financial inadequacy was the major limitation of this work. The researcher was financially dependent as a student. The need for materials, trips and logistics needed for this research was not adequately provided.
DATA: The controversial nature of the Nigeria data delayed this work. It took the researcher a lot of time before the harmonization of the data used in this research work.