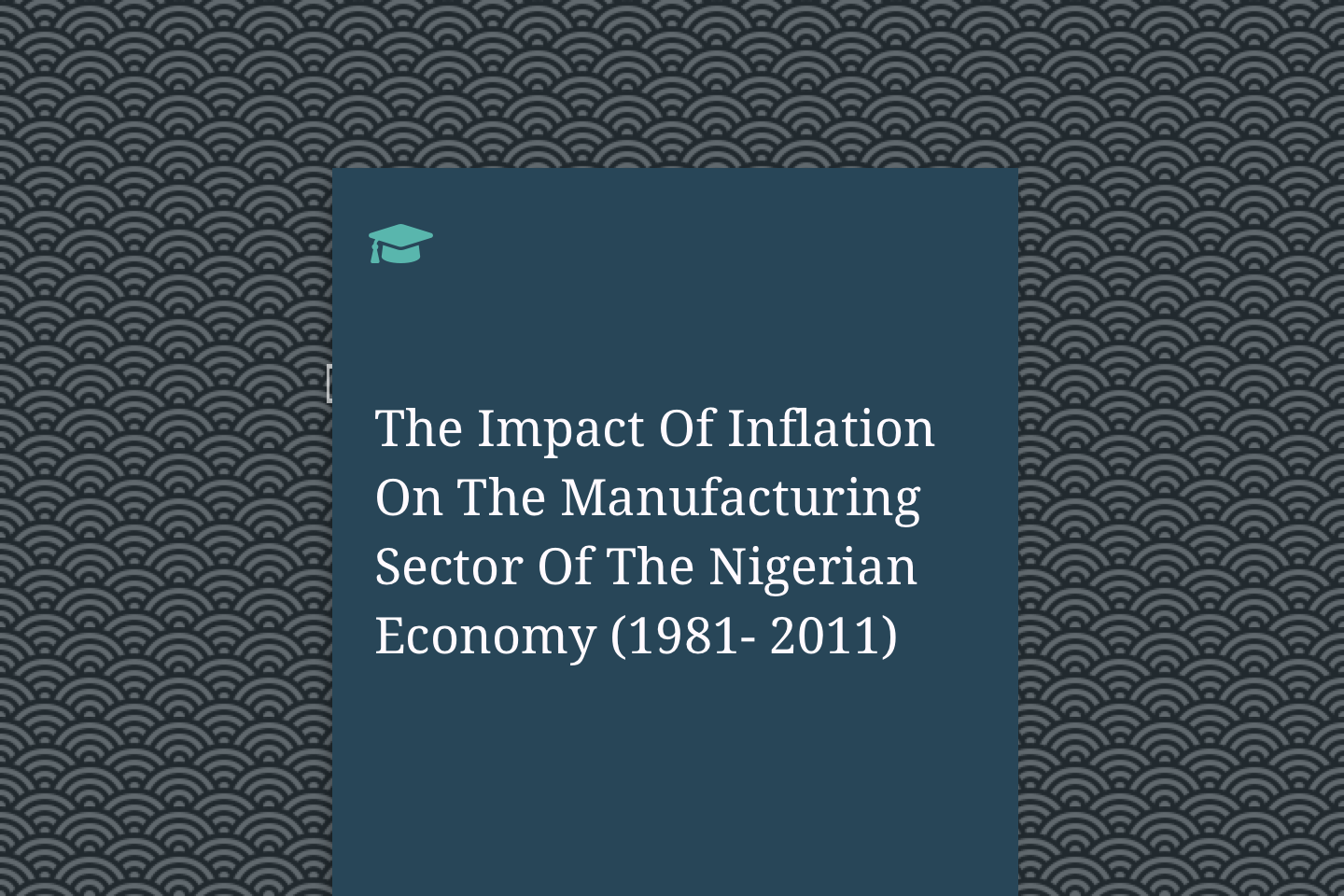 Inflation has remained a chronic problem for Nigerian economy for some time. Inflation is not a new wood in the world economy and not out rightly bad, but the case of Nigeria is severe and i t will destabilize the entire economic frame work if it is not properly checked. This problem has brought about reduction of purchasing power discouragement of real investment balance of payment disequilibrium and unemployment.

Inflation in Nigeria can be said to be a direct result of the policies of the country’s government to stimulate a fast rate of economic growth and development since 1951 when it was introduced. Inflation trend since independence shows to distinctive period. Until 1969 we had a single digit inflation and even a negative growth rate in 1963, 1967 and 1968. The year 1975, recorded 33-7 percent indicating the effect of 1974 Udojji salary Awards (Adigun, M.S 1985 “Reviving the Nigeria economy”)

The Nigerian economy seemed to have experience moderate inflation prior to the advent of the structural Adjustment programme (SAP) in 1986. Inflation on it own is not bad as studies have shown that there exists a positive relationship between inflation and growth. But the problem lies on a country continuously having high inflation rates. It has been revealed that a close relationship exists between inflation and diminishing growth rate across a variety of inflation ranges. Average growth rates falls slightly as inflation rate across a variety rates more towards 20-25 percent. The growth rate declined more steeply as inflation rates approaches 25-30 percent and growth rates became increasingly negative at a higher rate of inflation (Ogwuma, P.A. 1986; Gains and pains of inflation in the manufacturing sector of the Nigerian economy”

Manufacturing involves the conversion of law materials into finished consumer goods or intermediate or producers goods manufacturing creates avenues for employment, helps to boost agriculture, helps to diversify the economy while helping the nation to increase its foreign exchange earnings and enables local labour to acquire skills. The manufacturing sector in Nigeria has passed through four clear stages of development. T
The first was the pre-independence era, when manufacturing was limited to primary processing of simple consumer items by foreign multinational corporations.
The second was the immediate past colonial era of the 1960’s characterized by more vigorous import substitution and the beginning of decline for the export oriented processing of raw materials.

The third stage was the decade of the 1970’s. This was remarkable because of advent of oil and enormous resources it provided for fierce government to investment in manufacturing. This made the government to exercise almost a complete monopoly in the following sub-sectors basic steel production petroleum refining, petrochemicals, liquefied natural gas edible salt machine tools yeast alcohol, fertilizers etc. the period was marked by initiation of the indigenization programme and hence intense economic activity but poor results since governments attempt at diversification into non-traditional products such as steels, petrochemicals, fertilizers and vehicle assembly yielded little success.

The last phase was the decade of the 1980’s here government revenue fall because of serious decline of oil prices in the world market. This led to the adoption of export promotion strategy and the SAP era beginning from July 1986 has even emphasized this strategy especially as it relates to non-oil exports hence the extension of export promotion incentives of various descriptions (Enu, 1993: the Nigeria economy after structural adjustment programme “problems and prospects”)

Inflation worsens the balance of payment positions. Inflation has helped forced up interest rates thus determining investment and so by doing reduces the real values of aggregate consumer wealth such as government debt and money. It has inhibited and distorted consumer spending by rising domestic prices relative to foreign prices, the currency inflation inhibits exports and stimulates imports thus, depleting the nations scarce foreign resources.

Due to the inflationary situation savers find out that the value of their savings is eroded hence they are forced to add their current consumption thus hindering capital formation and the nation’s economic growth. Inflation militates against long term savings plan of the consumer and hence becomes a function in improving a sub optimal lifetime consumption pattern upon the consumer.

Current inflation rates in Nigeria have tremendously complicated and continued to complicate the task for makers of government fiscal and monetary policies. Even when they believe that rate of inflation is really the public does not. This inflation not only makes it harder for policy makers to diagnose the factors affecting aggregate demand.

The questions we are investigating here are:

The major objective of this study is to determine empirically the impact of inflation on the manufacturing sector of the Nigerian economy.

H0: inflation does not have any significant impact on the manufacturing sector of the Nigerian economy

H1: inflation has a significant impact on the manufacturing sector of the Nigerian economy.

H0: interest rate does not have any significant impact on the manufacturing sector of the Nigerian economy.

H1: interest rate has a significant impact on the manufacturing sector of the Nigerian economy.

This research will enable us to understand the factors responsible for the persistent rise in the price of goods and services produced in the economy by the manufacturing sector. It will provide appropriate recommendation on the ways, of eliminating inflation or
reducing it, so as to empower the economy for self sustained development capable of enhancing the economic well being of a greater number of populations. It will also equip the policy makers with adequate tools in formulating the right policy.

The study covers a period oaring from 1981-2011. The period was chosen in order to have serious investigation into the activities of the manufacturing sector.
The multiple regression models will be employed in determining the functional relationship between inflation and the research variables.

In carrying out the investigation sources of data posed a problem of its own. It is difficult to lay hands on up to data statistical data for empirical analysis especially in developing countries such as Nigeria. In any case one had to mean the best use of what was available.
Resulting from the short time limit couple with the financial constraints, the researcher was limited to primary and secondary sources.
Generally the researcher suffers frustration owing to administrative logistics. Below are some of the identifiable limitations.
1. Unpublished data were rarely made available to researcher by government officers who avoid violation of the official secrecy act.
2. Secondary data on the subject was stale and scanty in most of the libraries visited including the state library.

INFLATION: It is a persist tendency for prices and money wages to increase. The dictionary of economics said “inflation is measured by the proportional changes over time in some appropriate price index, commonly a consumer price index or a GDP deflator” inflation occurs when the general price level is rising.
MANUFACTURING SECTOR: Is s sub-set of the industrial sector (others being processing draft and mixing sub-set)
Manufacturing involves the conversion of raw materials into finished consumer goods or intermediate or producer goods.