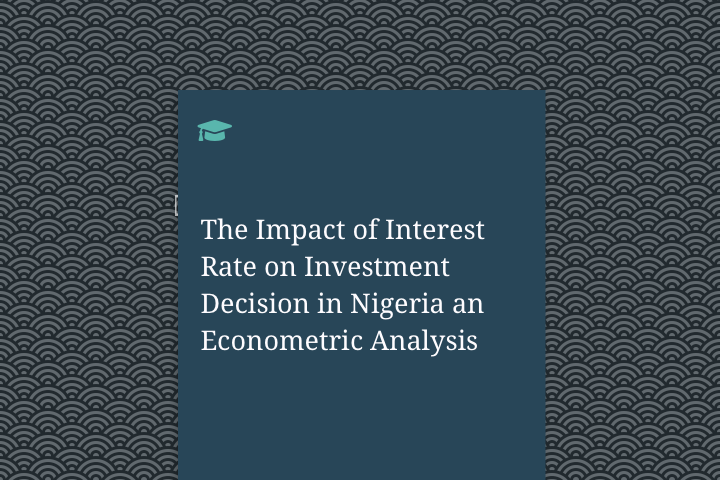 The focus of this research work is based on the impact of interest rate on investment decision in Nigeria. An econometric analysis between the periods of 1981-2010. Secondary data obtained from the central bank of Nigeria (CBN) statistical bulletin (volume 21) DEC 2010. Date was collected and empirical analysis made. To achieve these objective multiple regression was used in analyzing the data that the impact of interest rate on Nigeria prior to interest rate regulation in 1.986 and serve as guide to how interest rate can be fixed to enhance effective accumulation of savings that can channel to investment. Policy recommendation Government should in massively embarks on large-scale agriculture, manufacturing industrialization e.t.c and equally encourages small and medium scale enterprise (SMES). Public private partnership (ppp) should also be encouraged by government for efficient and effective production.

Investment is the change in capital stock during a period. Consequently, unlike capital, investment is a flow term and not a stock term. This means that capital is measured at a point in time, while investment can only be measure over a period of time.
Investment plays a very important and positive role for progress and prosperity of any country. Many countries rely on investment to solve their economic problem such as poverty, unemployment etc (Muhammad Haron and Mohammed Nasr (2004).
Interest rate on the other hand is the price paid for the use of money. It is the opportunity cost of borrowing money from a lender to finance investment project. It can also be seen as the return being paid to the provider of financial resources, for going the fund for future consumption. Interest rates are normally expressed as a percentage rate. The volatile nature of interest is determined by many factors, which include taxes, risk of investment, inflationary expectations, liquidity preference, market imperfections in an economy etc.
Banks are given the primary responsibility of financial intermediation in order to make fund available for economic agents. Banks as financial intermediaries move fund. Surplus sector/units of the economy to deficit sector/units by accepting deposits and channeling them into lending activities. The extent to which this could be done depend upon the rate of interest and level of development of financial sector as well as the saving habit of the people in the country. Hence, the availability of investible funds is therefore regarded as a necessary starting part for all investment in the economy which will eventually translate to economic growth and development (Uremadu, 2006).
Many researchers have done a lot of study on the impact of interest rate on investment. In Nigeria, Ologu (1992) in a study of “The Impart of CBN Money Policy on aggregate investment behavior”. Found out only few of the variables were significant at both the 95% and 90% confidence limits in explaining the behavior of investment during the (1976-90) period of student”. Specifically, he found out that:
Lesotho (2006) studied “An investigation of the determinants of private investment “the case of Botwana”. Among his independent variable were real interest rate, credit to the private investors, public investment and trade credit to the private investors, real interest rate affect private investment positively and significantly. Other variable do not affect private investment level in the short-term as they show insignificant co-efficient. GDP growth and conform similar finding sin studies by Oshikoya (1994), Ghura and Godwin (2000) and Malmbo and Oshikoya (2001).
Aysam et al (2004) in their study “How to Boot Private Investment in the MENA countries. The role of Economic Reforms”. Among their independent variables were accelerator, real interest rate, macroeconomic stability, structural reform, external stability, macroeconomic volatility, physical infrastructure. Their studies ranged from 1990 to 1990 comprising of panel of 40 developing countries. They used co-integration technique to determine the existence of a long-term relationship between private investment and its determinants. They fund out that almost all the explanatory variables exhibit a significant impact on private investment, with the exception of macroeconomic stability and infrastructures. The accelerator variable (ACC) has the expected positive sign, which implies that the anticipation of economic growth induce more investment. Similarly, interest rate (r) appears to exert a negative effect on firm’s investment projects, which is consistent with the user cost of capital theory.
In the U.S, Evans, estimated that net investment would rise by anything between 5% and 10% for a 25% fall in interest rate. These percentage changes were calculated to occur over a two year period after a one year log.
A study by Kham and Reinhart (1990) observe that there is a close connection between the level of investment and economic growth. In other words, a country with low level of investment would have a low GDP growth rate. The use of ryid exchange rate and interest rate controls in Nigeria in low direct investment, the leads to financial impressions in the early 1980. Fund were inadequate as there was a general lull in turn leads to the liberalization of the financial system Omole and Falokun (1999). This may have an adverse effect on investment and economic growth.
As already discussed so far, it is quite clear that an understanding of the nature of interest rate behavior is critical and crucial in designing policies to promote savings, investment and growth. It is pertinent to note that this research attempts to investigate and ascertain the impact of interest rate volatility on investment decisions in Nigeria using time series data covering from 1981-2010.

The financial systems of most developing countries (like Nigeria) have came under stress as a result of the economic shocks of the 1980s. The financial repression, largely manifested through indiscriminate distortions of financial prices including interest rates, has tended to reduce the real rate of growth and the real size of financial system, more importantly, financial repression has (retarded) delay development process as envisage by Shaw (1973). This led to insufficient availability of investible funds, which is regarded as a necessary starting point for all investment in an economy. This declines in investment as a result of decline in the external resource transfer since 1982, has been especially sharp in the highly indepted countries, and has been accompanied by a slowdown in growth in all LDCs. Both public and private investment rate have fallen, although the latter more drastically than the former. If this trend is maintained, it will lead to a slowdown in medium term growth possibilities in these economies and will reduce the level of long-term per capital consumption and income, endangering the sustainability of the adjustment effort. The observed reduction in investment in LDCS seems to be the result of several factors. First, the lower availability of foreign savings has not been matched by a corresponding increase in domestic savings. Secondly, the determinating of fiscal conditions due to the cut of foreign lending, to the rise in domestic interest rate, and the acceleration in inflation forced a contraction in public investment. Thirdly, the increase in macroeconomic instability associated with external shocks and the difficulties of domestic government to stabilize the economic has hampered private investment.
Finally, the debt overhand has discourage investment, through its implied credit constraints in international capital markets Luis Serven and Falokun (1989).
In order to curb the adverse effect of the 1980s financial repression, Nigeria government deregulated interest rate in 1987 as part of the Structural Adjustment Programme (SAP) policy package. The official position was that interest rate liberalization among other things, enhance the provision of sufficient funds for investors, especially manufacturers (a priority sector) who were considered to be prime agents, and by implication promoters, of economic growth. However, in a policy reversal, the government in January 1994 out-rightly introduced some measure of regulation into interest rate management. It was claimed that there were “wide variations and unnecessary high rate” under the complete deregulation of interest rates.
Immediately, deposit rates were once again set at 12% to 15% per annum while a ceiling of 21% per annum was fixed for lending a rate. The cap on interest rate introduced in 1994 was retained in 1993 with a minor modification to allow for flexibility. The cap stayed in place until it was lifted in 1997, thus enabling the pursuit of the flexible interest rate regime in which bank deposit and lending rate were largely detrrmined by the forces of demand and supply for funds (Omole and Falokun 1999).
Declining investment ratio and level are problems; first of all, because investment matters for growth.
Secondly, because low investment increases vulnerably in the economy (Niambon and Oshikoya, 2001; 16). The main challenge that Nigeria is facing is to make policies that will help revive and raise investment in the country in order to stimulate and sustain economic growth.
In view of the perceived challenge, this research work intends to provide answers to the under listed questions:

1.3 Objective of the Study

The research question above have given us an incite of the objectives the research work attempts to achieve. They are:

Based on the above stated research objectives, conclusions would be drawn from the following research hypotheses:

1.5 Significance of the Study

This work is mainly for academic purpose. However, it will be of great importance to my researcher who would want to embark on any research on interest rate and investment decision.
Also this piece of research work would go a very long way in assisting any person or growth of persons who would wish to know the place of interest rate and investment decision in Nigeria.
Though for academic purpose, this work would be of great important of anybody who would want to embark on investment.

1.6 Scope of Limitation of the Study

The study focuses on the impact of interest rate on investment decision in Nigeria starting from 1981-2010 using annual time series data. Upon the assertion that every pros have some cons, this study cannot be exception. Some hitches and setback were encountered in the process. First among the list is data unavailability. For this reason, investment variable would be provided by Gross Fixed Capital Formation (AFCF).
Secondly, time and financial construct cannot be left out in the list setback and hitches.
The cost of sourcing materials from the internet is exorbitant because of epileptic and erratic power supply of the Power Holding Company of Nigeria (PHCN). Thus, the cyber café power their systems with power generating sets which increases their cost of production which they eventually pass to us (the consumers of their services).
Despite all these hitches and setbacks mentioned above, this research work would have been a perfect work.