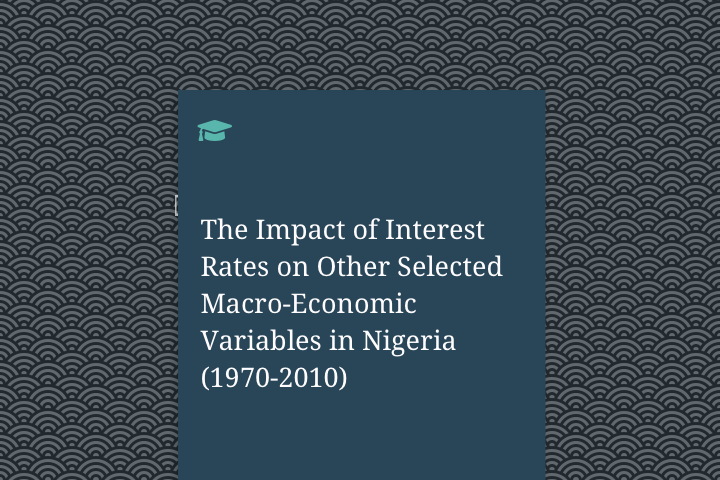 This study was embarked upon with a view to determining the impact of interest rate on other selected macroeconomic variables in Nigeria. Data were sourced from CBN Abuja and NBS. Data were analyzed using the ordinary least square regression (OLS). Results indicate that: Interest rate is inversely related investment and also negatively related with GDP. On the basis of the above stated findings some policy recommendations were made.(1)Government should establish policies that encourage increase in savings deposit rate, reduction in lending rates and also, efficient and reliable financial institutions encourage people to save. (2) The require reserve ratio should be to strengthen the lending rate of commercial banks. (3) We recommend that the government and financial authorities should implement policies that favour income growth such as job creation and increase in salaries and wage increase as these will affect investment significantly.

1.1 BACKGROUND TO THE STUDY

Interest rates play important role in controlling major macroeconomic variables. The primary role of interest rate is to help in the mobilization of financial resources and to ensure efficient utilization of resources for the promotion of economic growth and development (CBN 1970).
However, they are various states of interest rates in the financial system. They are generally classified into two categories: Deposit and lending rates. Deposits rate are paid to savings and time deposits of different maturities, while lending rates are interest rates charged on loans to customers and they vary according to cost of loanable funds and lending margins.
A number of factors influence the behaviour of interest rates in an economy. Prominent among these are the volume of savings, inflation, investment, government spending, monetary policy and taxation constitute the major source (supply) of credit while investment represents the major demand for credit. Therefore, the level of savings partly determines the level of interest rates. For instance, a decrease in the accumulation of loanable funds (savings) is bound to exert an upward pressure on interest rates, just as the reverse situation would tend to have a moderating effect. Usually, when the structures of interest rate are changed, the resulting relative rates of return will induce shift in the assets portfolio of both banks and the non-banks public institutions. Hence, the direction and magnitude of changes in the market interest rates are of primary importance to economic agents and the policy makers.
Consequently, the Nigerian Economy has been highly prone to interest rate volatility and fragility (CBN, 2000). Interest rates of all instruments have experienced very volatile movements. Inconsistencies have been the order of the day (Adewunmi, 1997).
Prior to the structural adjustments programme (SAP), the level and structure of the interest rates were administratively determined by the Central Bank of Nigeria (CBN). Both deposits and lending rates were fixed by the bank, based on policy decision (CBN, 1962). At that time, the major reasons for administering interest rates were the desire to obtain social optimum resource allocation, promote orderly growth of the financial market and combat inflation in implementing the credit policy. During this time, the minimum rediscount rate which was very low, averaging about 7.25 percent between 1975 and 1985.
Also, preferred sectors could not access funds because financial institutions were unable to raise sufficient funds form the money market at the favoured concessionary rates (Staley and Morse, 1966). Within the general framework of deregulating the economy in 1986, in order to enhance competition and efficient allocation of resources, the CBN introduced a market based interest rate policy in August 1987 (CBN, 1987).The policy decision was not without controversy, and later,it was generally agreed that low interest rates did not encourage savings. It was feared that high interest rate which was likely to accommodate the deregulation of interest rates allowed banks to determine their lending and deposit rates according to market conditions through negotiations with their customers (CBN, 1987).
However, the minimum rediscount rate (MRR) which influenced interest rates continued to be determined by the CBN in line with changes in overall economic conditions. The MRR which was 15 percent in August 1987 was reduced to 12.5 percent in December 1987 with the objective of stimulating investment and growth in the economy (CBN, august 9, 2006). During the same period, the prime lending rates of commercial banks and merchant banks were on the average 18.0and 20.5 percents respectively. But following the need for moderate monetary expansion in 1989, the MRR was raised to 13.5 percent. It was also observed that there were wide disparities in the interest rates structure of the various banks.
As it were, the ceiling on interest rates were removed in January 1992 and retained in 1993. Interest rate in 1993 was volatile and rose to unprecedented level. On the basis of the foregoing developments, some measures of regulations were introduced in 1994. The developments in interest rates within this period were generally within the prescribed limits but the rates on the other hand were negative in real terms since inflation was estimated to be over 50 percent.
All the same, the banks still maintained the interest rate regime in 1995 with some modifications just to make it flexible. Nevertheless, it should be noted that the change in interest rates were significantly different from what prevailed during the era of regulation. Over the past three decades, high macro-economic instability has become a key determinant and the consequence of poor economic management. Nigeria, a country blessed with abundant natural resources is seen as one the countries that have the most volatile macroeconomic aggregates. This is in order with National Economic Empowerment and Development strategy (NEEDS, 2004) which says that “between 1975 and 2000, Nigeria’s broad macroeconomic aggregates growth, the terms of trade, the real exchange rate, government revenue and spending were among the most unstable in the developing world”.
It is these developments which have fuelled the need to embark upon this study. It could be possible that the macroeconomic instability is deep rooted in erratic movements of interest rates.

It is a well known fact that the Nigerian Economy is characterized by volatile interest rates, macro economic instability. Several measures embarked upon by the CBN failed to correct these defects in the economy. The most important of these measures were contained in the amendment of the CBN monetary circular No 21 which diverted the control of rates from CBN on August1, 1987. The bank had been in control of the cost of credit in the economy regulating the interest rates charged by the commercial and merchant banks in their lending activities.
As it is, banks determination and control of interest rates on loans did not help for the stability of major macroeconomic variables due to the volatile nature of rates during the planning period. Currently, interest rates are market determined and the study intend to investigate the impact of interest rate on some selected macroeconomic variables. In view of this, the research questions are stated as below;

The broad objective of the study is to determine the relationship between interest rate and other selected macroeconomic variable such as Investments and Gross Domestic Product (GDP) in Nigeria.
The specific objectives are;

The findings of this study will be considered significant in the following ways;

THE ROLE OF FINANCIAL INSTITUTIONS IN AGRICULTURAL DEVELOPMENT (1990-2010)