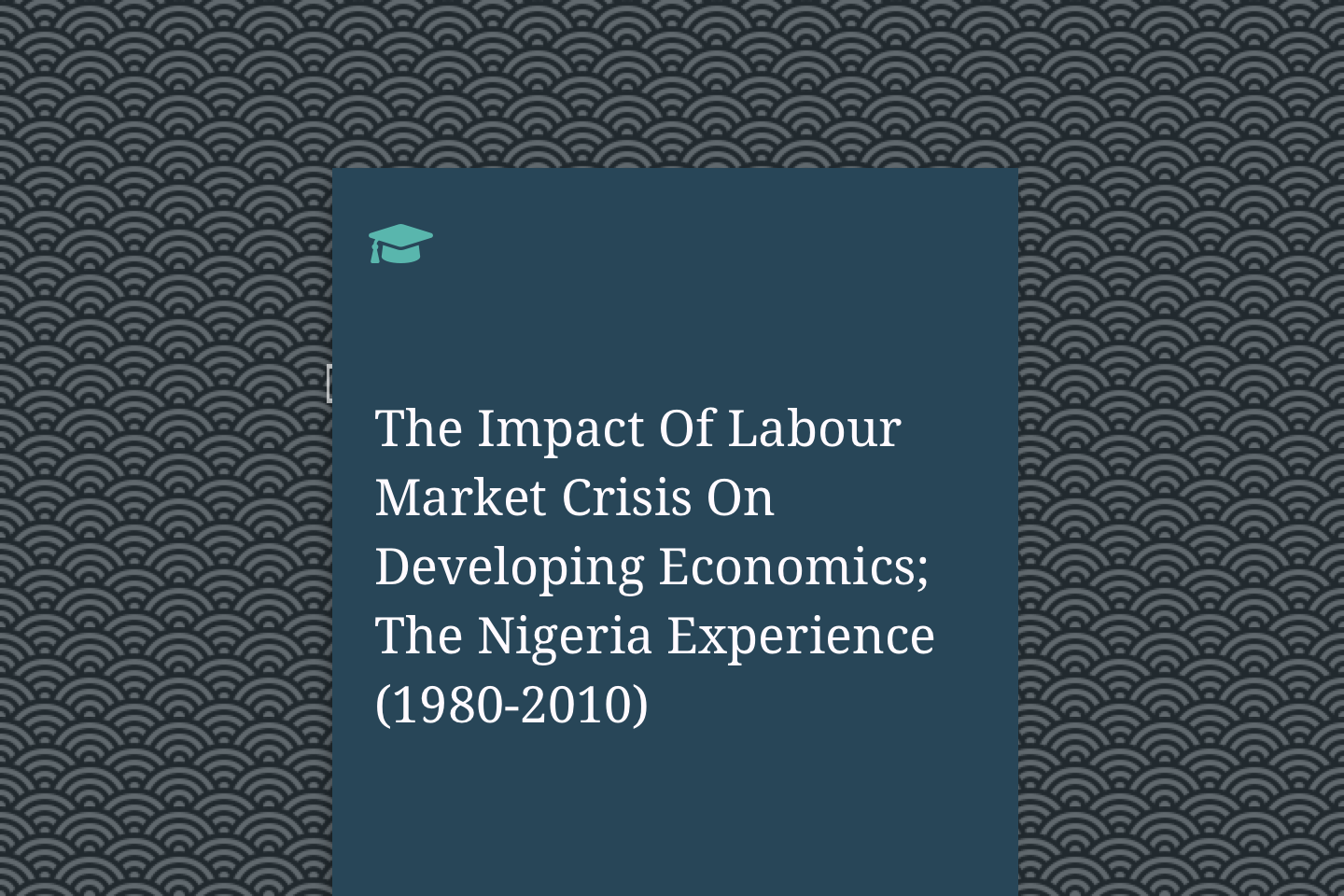 This research work tries to investigate the impact of labour market crisis in developing economics using Nigeria as a case study .Using Nigeria as a case study. Using ordinary least square the study shows that there is a negative relationship between labour market crisis and economic growth; Also inflation was found to reduce production output and economic growth. Based on these findings this study recommends that government should apply reconciliation technique with labour unions so that production output would not be affected also policies such as unemployment benefit and reduction in wage inequality should be applied.

The Nigeria labour market in recent years has experienced problems such as strikes, unemployment and reduction in productivity. Labour conflict is a phenomenon that most often takes the form of strikes [where they are permitted] or, as in the public sector in the united states the arbitration procedures. In the United states arbitration is frequently used in the public sector when strikes are forbidden. The arbitrators are generally experts picked by the employers and unions following a procedure setout by the government.

Unemployment is one of the developmental problems that face developed and mostly developing economics of which Nigeria constitute 2/3 [two third] of the population of developing countries. During the last 30 years, the industrialized countries have evolved in different directions with respect to unemployment.
The minimum wage legislation exists in 22 [OECD] organization for economic cooperation and development. Such legislation has generally been framed with the intent to compress wage inequality. But the effectiveness of the minimum wage as an income redistribution tool is often criticized, since by raising the cost of labour it can have negative effects on out put and employment .Economic analysis suggests that the effects of the minimum wage on employment actually depend on the initial level of minimum wage.

The minimum wage can be set on an hourly, daily or monthly basis .Everywhere thepublic authorities govern the mode of its calculation but it can also be bargained over between employers and employees.

The effect of the minimum wage depend on the characteristics of the labour market to which it applies . However , other theoretical framework s like the monopsony model or the matching model with endogenous labour market participation or job search effort highlight situations which arises in the minimum wage and leads to an increase in hiring.

An active and functioning labour market is important for economic stability .The Nigeria labour market has been experiencing a lot of crisis over the years .Loss of manpower which policy makers fear will adversely affect the national output .

The voluminous literature on the source s of economic growth identified awide range of natural and government imposed stimulants and impediments to growth.
In particular, a huge level of educational attainment, an open – trading regime, a low level of government consumption and political stability are generally seen as having a significant on internal growth is its interest in the effect of institutions on economic growth and the vital role played by the labour market institution s in economic growth . The high rate of labour unionization has been a notable characteristic of a number of economic s with different growth performance s, though probable link between labour unionization and growth has been frequently noted.

This paper attempts to look at the effects of labour market crisis on developing economics using Nigeria as a case study .Strike volume has been studied from a number of viewpoints. One view point attribute strike propensity to such economic factors as unemployment, inflation and real wage change [faber 1978]. The other view point is the organizational perspective which states that strikes are related to such structural factor as the extent of unionization and the degree of centralization and institutionalization in collective bargaining [BRITTE AND GALLE 1972; SYNDER 1975 ].

Most of the developing economics are faced with numerous labour market crisis and the Nigeria economy is not an exception especially after the [SAP] Structural Adjustment Program. The Nigeria labour market problem could be seen as one of the chronic labour crisis with high wage inequality and unemployment. Since independence there has been series of distortions in the labour market. The market is highly distorted and characterized by insignificant imbalances and industrial actions embarked upon by the Nigeria labour congress [NLC] pressing for improved working conditions for workers .These actions are in the form of strikes .
The academic and non- academic union of the Nigerian tertiary institution are not left out as they embark on several actions to either pressfor improved working condition, redressing the wage inequality problem and in some cases to register their disagreements with government development program. All these lead to loss of man-hour which policymakers fear will adversely affect the national output.

During the military era, it was not news for workers to embark on strike as it was a potent weapon at the disposal of the workers to drive home their demands.
What then have been the effect of these myriad of the labour crisis on the productivity and the growth of the Nigeria economy? The above questions have not adequately received attention empirically.

1. What is the effect of labour market crisis on Nigeria economic growth.

1.4 OBJECTIVE OF THE STUDY.

The following hypothesis was formulated in line with objective of the study.
1. There is no relationship between labour market crisis and economic growth.

This research is designed to investigate labour market crisis on developing economics using Nigeria as a case study.

The crisis that has for a long time beclouded the Nigeria labour market has been a source of worry to policy makers. This worry comes from the fact that industrial actions does not affect only the sector concerned but also affect the general economy because of its multiplier effect .
The study , which is aimed at assessing to what extent the labour market crisis affect s the economy , will be of tremendous importance not only to the Nigerian economy , but also to the global economy since globalization and liberalization have brought global systems together. The findings of this research will also help to improve the current economic reforms that have to do with labour market institutions. Finally, this research will serve as material for researchers carrying out studies on related area.