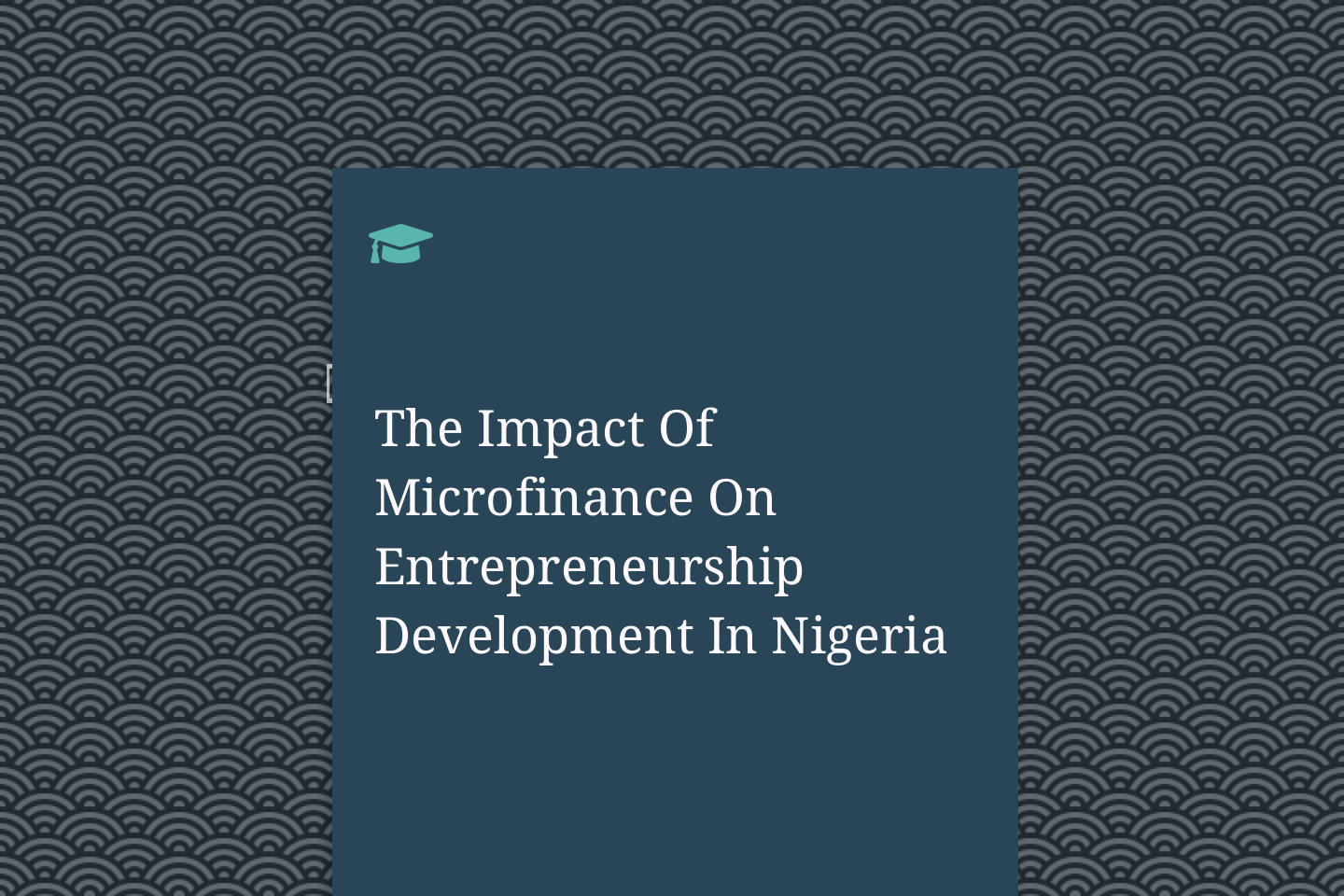 The Impact Of Microfinance On Entrepreneurship Development In Nigeria

It is an undisputable fact that the contribution of microfinance to entrepreneurship activities is increasing being recognized as a primary engine of economic growth. (The Economist, May 18th 1996). By combining existing resources with innovative ideas, entrepreneurs add value through the commercialization of new products, the creation of new jobs and the building of new firms. The Global Entrepreneurship Monitor (GEM) indicates that nations with higher levels of entrepreneurial activity enjoy strong economic growth. In short, entrepreneurs are the link between new ideas and economic development. This is proper using the experience of the industrialized countries of North America and West Europe. Legislative actions has been taken by countries like United States of America, the Netherlands and Japan to see to the fact that entrepreneurial activities can contribute to economic development. This may explain why various governments around the world promoted it since entrepreneurial skills and strategies are used to tackle different social problem and addressing poverty as well as a means of employing the disadvantaged.

Speaking at the conference with a theme “Improving Access to Microfinance”, Soludo (2008) revealed that in order to sustain increases participation of skilled entrepreneurs in the credit and other financial service delivery to the micro, small and medium enterprises in the microfinance sub-sector, Central Bank of Nigeria (CBN) is forging ahead in its determination to develop a pool of articulate and well focused entrepreneurs through setting up one Entrepreneurship Development Centre (EDC) in each of the six geo-political zones in the country. The three pilot entrepreneurship development centres, he said,. Will commence January, 2008 are in Kano (North West), Ota (Southwest) and Onitsha (Southeast). Also speaking at the international microfinance conference and annual microfinance conference and annual microfinance and entrepreneurships awards held at the Sheraton Hotel and Towers, Abuja, Soludo (2008) stated that access microfinance by the economically active poor and low income earners in Nigeria is a collective responsibility for the achievement of the Millennium Development Goals (MDGs); He added that it provides a strong focus on macro-economic stabilization, especially in the pursuance of massive trades and investment liberalization program to encourage entrepreneurial capacity to develop business and for the business to success (Nwoye, 1997).

Despite the missing links in Africa’s development process, researchers and scholars have increasingly recognized the crucial role that entrepreneurship plays in economic development of nations, especially through the development of microfinance sub-sector. (Rashed, H.S, 2000, Dozie, 2005 Aglion and Howilt 1997). For instance, Dozie argued that this vital factor of production which forms the basis of the Schumpeter’s dynamism is the bedrock to a nation’s industrialization and development. According to them, this is achieves through the innovation and risk taking ability of the entrepreneurs. It is therefore, the entrepreneur who generates the critical momentum an economy requires for economic growth by breaking new grounds in human endeavour as a result of the vital characteristics they possess.

However, on this note, this study intend to address the entrepreneurship in Nigerian economy has the potential of becoming the path to success and compete favourably at the global market economy, when the technical and commercial skills of the entrepreneur are effectively develops utilized.

Peter and Clerk (1997) affirm that entrepreneurial development is a disposition to accept new ideas and try new methods; a readiness to express opinions, a true sense that make men and women more interested in the resent and future than in the past, a better sense of punctuality, a greater concern for planning, organization and efficiency, a tendency to seek the world as calculated a faith in science and technology and finding a belief in distributive justice.

The study is an attempt to show how successful entrepreneurship development through microfinance institutions will result in creation of jobs, develop greater skills that can be more readily adopted by local residents (see Green et al, 1990; Kovshling and Allen 2004). Entrepreneurial development programmes offer sustainability and flexibility to meet broader community development needs (Dabson Ricky and Scheveke 1994, Loyons and Hamlin 2001, Lichtentein Iyons and Kutzandua 2004.

In view of the forgoing, the Federal Government of Nigeria (FGN) has been adopting monetary, fiscal, industrial and developmental policy measures at the macro level to facilitate and support entrepreneurial activities and at the same time specific financing g arrangements are being made in respect of funding programmes at the micro level to boost entrepreneurship activities in Nigeria.

The community banking system is one of such programmes introduce by decree 46 of 1992 (as amended) to finance and support the growth of entrepreneurship in Nigeria. The micro units in agricultural transport, commerce and industry, textile, dying tanning, vulcanizing, blacksmithing, health, architectural, entertainment and other needs, this microfinance banking system is evidently fraught with problems as regards to its ability to finance projects in rural (and even semi-urban) communities. This is evident in the reform process of the Nigerian banking system, at which the community banks by the reform are to become Microfinance Banks (MFBs) with a minimum of 20 million capital base by December 31st 2007.

This research therefore, aims to make a close evaluation of the impact of microfinance on the development of entrepreneurial activities in Bauchi Local Government Area, with special reference to some small scale entrepreneurs in the three districts of Galambi Bauchi and Zunhur.

Based on the research questions marshaled above the specific objectives seeks;

1.5 JUSTIFICATION OF THE STUDY

This study is a build-up on the previous investigation by various scholars and researcher on the impact of microfinance banks on entrepreneurship development, especially in Bauchi Local Government Area of Bauchi State and is aimed at building up on the lapse of previous investigations.
The importance of this study lies in identifying the various problems that have bedeviled the effectiveness of the microfinance banking system.
More so, the study will add to knowledge on how Nigeria policy makers can grow the economy through their support on entrepreneurship development in Bauchi state. Which has been identified as the momentum for Nigeria economic growth (Onuoha, 1994).
Thus the justification of the research.
The findings of the research will therefore, provide a veritable base for the effective functioning of microfinance to the development of entrepreneurial activities.

Drawn from the research question marshaled above, and objectives that this research aims to achieve, the following hypothesis have been formulated to help in the conduct of veritable and worthwhile research.

Both hypothesis are complementary.

The limitations which include unavailability and inaccessibility of relevant data and material necessary for carrying out this study.
Another is the unwillingness on the art of the respondents to give adequate and correct information necessary to carry out the work. The researcher’s inexperience in research is also another limitation.