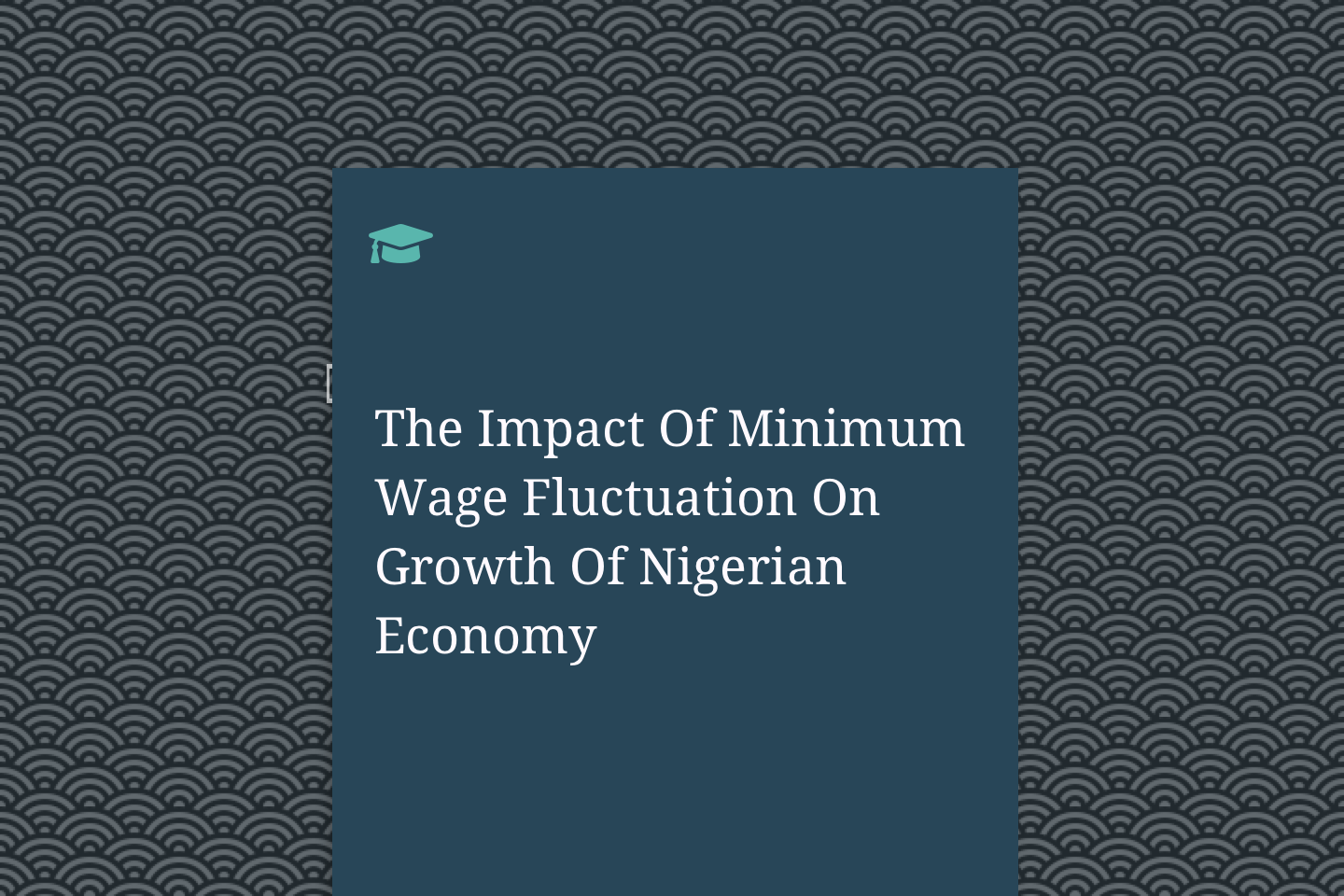 The Impact Of Minimum Wage Fluctuation On Growth Of Nigerian Economy

This research work investigates the impact of minimum wage fluctuation on growth of Nigeria economy. Determinants of labour market in Nigeria arising from the economic transformation in recent years, and how public policy affects in particular labour market outcomes. The result has shown that increase in minimum wage increase by l unit (1 million), increase real gross domestic product by 0.038million. Similarly, an increase composite consumer price index in by 1 unit (1 million) reduced RGDP by -55.063 (million) Increase in per capital income by I unit (1 million) increase RGDP by 4788.060million. Also increase in labour forces by 1 unit (1 million) reduced RGDP by 0.005million while increase in inflation rate by 1 unit (1 million) reduced RGDP by 0.035. This is in conformity with the theoretical expectation, since it believes that increase in minimum wages and per capital income supposed to increase the real gross domestic product of the country. And that, per capital income is the most significant. This would propel the economy to higher levels of productivity. There is need for government to create enabling environment which would encourage heavy investment in infrastructural foundation that can enhance labour productivity and induce growth.

Income policy is usually used as a principal component of welfare boosting and poverty reduction macroeconomic policy framework in Nigeria. Minimum wage (hereafter MW) legislation is a major income policy readily employed in this regard. Although MW policy has both negative and positive effects on the overall economy, policy makers, especially politicians, have used it more often for political purposes than for socio-economic reasons. MW legislations in the country have been preceded by high inflation rates that erode purchasing power and bring reduction in welfare (Adams, 1987). Consequently, the need for MW legislation, which normally leads to a rise in nominal wage, is justified as a means of adjusting wages and salaries to match with the rise in costs of living.

It is, however, notable that wage increase brought about by MW is usually counter-productive. Apart from leading to a rise in general price level, wage increases, are always followed by threat of reduction in government workforce, and in some cases, such threats have resulted into massive laid-off in the civil service (Olaleye, 1974; Owoye, 1994). Also, wage increases in Nigeria do not match up with the rate of increase in prices. As a result, there are always agitations from the labour unions for persistent wages and salaries increase. This regular call for rise in wages is at times based on the wide gap between public sector‟s and private sector‟s wages. The gap between public sector‟s and private sector‟s wages has often been given as one reason for the inefficiency and corruption in the public sector. It is argued that public sector workers deserve adequate compensation commensurate with their labour, in other to bring about efficiency (Obasanjo, 1999).
In view of the above, many stakeholders, particularly the labour union organisations, have severally called for wage indexation. However, given the problem with wage indexation, government has found a convenient means of raising wages by setting up Wage and Salary Commissions (WSCs) over the years. Although WSCs are meant to provide a wide-raging solution to civil service problems, increment in wages and salaries is normally embedded in the recommendations of such commissions.

Inspite of the differing effects of MW legislation, its macroeconomic impact has found little interest in empirical study in Nigeria. Although there are sample studies that have tried to examine the impact of MW in an economy across different parts of the world, such studies have often employed a partial analysis, with focus on specific economic effects of MW in the economy. As pointed out by Adams (1987), the impact of MW could only be adequate captured within a macroeconomic model framework. This study, therefore, analyses macroeconomic effects of MW using a computable general equilibrium (CGE) model. The static CGE model developed in the paper allows for an analysis of the impact of MW across several sectors and variables within an economy. In particular, the study examines the impact of MW policy on household income, consumption, general price level, productivity (output), employment and government balances.

The recent warning strike embarked upon by the organised Labour to demand increase in wages has ignited widespread debate on the place of the Nigerian worker in the economic scale of the country. „Though organised labour eventually called off its three-day warning strike, many have continued to question the much-taunted democracy dividends. Emeka (2011) in this report takes an overview of the demand of the workers for N18,000 minimum wage in comparison with what political office-holders earn and its attendant effect on the economy.

According to observers, the place of the common man in Nigeria‟s governance strata has remained a question mark on successive administrations. While workers in every facet of the economy labour night and day for paltry sum to survive the prevalent harsh economic conditions in the country, the political class is perceived to squander the national resources without care. As if to give vent to this school of thought, the joint government-Labour-Employer negotiating team chaired by retired Chief Justice of Nigeria (CJN), Alfa Belgore, set up by government had drafted a new minimum wage bill. The bill reflected the agreement reached between government and Labour as agreed by both parties, but government feigned ignorance of such agreement.

The committee had, while presenting its report to the Secretary of Government of the Federation (SGF), Ahmed Yayale, in Abuja noted that the N 18,000 minimum wage would not lead to inflation as being canvassed in some quarters.

“The Tripartite Committee on National Minimum Wage has recommended a national minimum wage of N18,000 per month for all establishments in the public and private sectors employing 50 workers and above,” Belgore stated. “The committee met severally and consulted widely. It further took cognisance of the need to ensure that the outcome of the exercise must be growth-propelled in terms of GDP growth rate. “It also considered its capability of promoting rapid socio-economic transformation of the country, which will not lead to inflation spiral. The objective is aimed at alleviating poverty in the country as well as maintaining macroeconomic stability.” Belgore (2010) also suggested that to make the recommendations effective, the extent National Minimum Wage Act 1981 and its subsequent amendments of 1990 and 2000 should, be repealed with a new wage act. Leadership of the organised Labour had hinged their warning strike on the fact that government refused to heed agreements reached with it after widespread consultation. General Secretary of the Democratic Socialist Movement (DSM), Segun Sango, had noted, irrespective of the fact that the National Assembly had expressed its willingness to give the bill accelerated passage that government failed to submit to the legislators. Even some analysts have thrown their weight behind the Belgore committee, describing demand for wage increase by Labour as justified.

There is the need to adopt a systematic approach regarding such matters. In most progressive countries of the world, the wage increase index is linked to the rate of inflation,” Chizea (2010) advised. “The thinking is that the government must be proactive in catering for the welfare of workers. If salaries lag way behind increases in the rate of inflation, then there will be erosion in the quality of life of the generality of the workers. Therefore periodic wage increases is very much part of an effective salary administration.”

Chief executive officer, Global Analysis Derivatives Limited, Tope Fasua, while acknowledging that wage increase does not hold eternal emancipation for workers anywhere in the world, noted that it is important for government to pay living wages. “There is no way wage increases can lead to the eternal emancipation of workers anywhere in the world. The effect will at best be a temporary reprieve until prices catch up with the new wage levels,” Fasua (2011).

“That said, it is important to note that the Nigerian government and companies need to pay living wages to their workers. I think that is what Nigerian workers are demanding. It is important to note that the world over, at best only 10 percent of the population of any country can be said to really be financially emancipated.
“The situation is worse in developed countries where people merely live from one salary to another, while worrying about the huge overhang of debt that they have been pressured to acquire as a result of the wrong economic paradigm of capitalism which their countries believed in.” But there are others who argue that wage increase may have adverse effect on the economy. Therefore, the research will focus on impact of minimum wage fluctuation on growth of Nigeria economy.

At the intellectual levels the study examines some alternatives or contending paradigms on minimum wage fluctuation in particular, econometrical and empirical underpinning and resulting conclusions as investigated by several researchers. In this regard, the study is regarded as a cornucopia of authoritative information on the subject matter, both in term of wealth of data as well as its analytical insights. It is hoped that the study will appear to a wide variety readers including not to current but future economic policy decisions makers and planners to enhance their decision making ability but also to student of economics, finance, business administration and cognate endeavors but also researchers who will find as a germinal contribution and stimulant of further researcher in the field.

This study uses data set covering a period of twenty-nine (29) years from 1980-2010. Central Bank of Nigeria (CBN)‟s Statistical Bulletin which is the main source of data used in this research. A long period of study like this will provide an insightful behavioural characterization of minimum wage fluctuation on the growth of Nigeria economy.