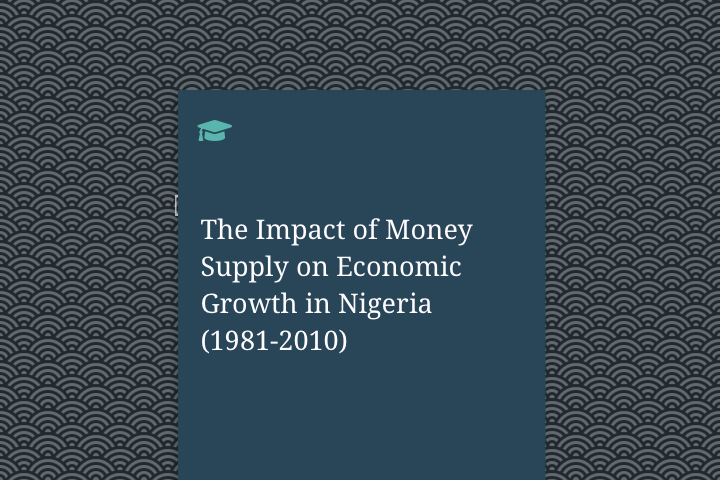 The relationship between money supply and economic growth has been receiving increasing attention than any subject matter in the field of monetary economics in recent years. Economists differ on the effect of money supply on economic growth. while some agreed that variations in the quantity of money is the most important determinant of economic growth and that countries that devote more time to studying the behavior of aggregate money supply experiences much variations in their economic activities(handle 1997),others are skeptical about the role of money on gross national income (Robinson 1950, 1952).
Evidence has shown that since 1980 some relationship exist between the stock of money and economic growth or economic activity in Nigeria. Over the years, Nigeria has been controlling her economy through variations in her stock of money. Consequent upon the effect of the collapse of oil price in 1981 and the balance of payment (BOP) deficit experienced during this period, various methods of stabilization ranging from fiscal to monetary policy were used. Ikhide and Alwoda (1993) concluded that reducing money stock of money through increased interest rates would lower gross national product (GNP). Thus the notion that stock of money varies with economic activities applies to the Nigerian economy. As already explained money supply exerts considerable influence on economic activity in both developed and developing economics. The low level of supply of monetary aggregates in general and money stock in particular had been responsible for the fundamental failure of many African countries to attain growth and development. Various scholars have laid much of the blame for the failure of monetary policies to translate into economic growth on the government and its agencies as a result of poor implementation and sincerity on the part of policy executors.
In discussing the concept of money supply and its impacts, two other issues often come to our mind which is the state of inflationary pressure and the unemployment rate. According to the monetarist, an increase in money supply in an economy causes an increase in general price level of commodities which brings about inflationary in the country (uzougu 1981). Also related to the issue of inflation is the issue of unemployment which is the primary goal of any economy so as to produce as many goods and services as possible while maintaining an acceptable level of price stability, but this major goal will be very difficult to attain at high inflation rate and price instabilities due to excess money supply in the economy. This research work therefore, would review the technicalities involved in the control of money supply in Nigeria.

A study of this nature is always necessitated by the existence of certain problems. The major problem that trigged off this work is the recurrence of general price instability, persistent inflationary pressures and unemployment in the economy, in spite of the plethora of monetary policy measures adopted and applied over the years.
There is also this problem of general feeling that a continuous annual rate of money increases will adversely increase the rate of price level which will directly lead to inflation, which may deny the intended effects of use of monetary policy measure to influence economic growth thus, requiring a policy response. Recently, these inflationary pressures have succeeded in bringing about devaluation in Nigeria’s currency value as a result of expansionary measures of money supply.
From the above issues, this research work will address the following pertinent questions:
a) What is the impact of money supply on economic growth in Nigeria?
b) How can monetary policy be used such that its intended effects of promoting economic growth are assured?

As a result of the problems highlighted above, the researcher desires to achieve the following objectives;

1.4 HYPOTHESIS OF THE STUDY

This research work will help us to investigate into the beneficial effects of the control of money supply especially its impacts on economic growth in Nigeria. It will also add to the existing knowledge about the relationship between money supply and inflation in Nigeria.
It will equally help students, government, policy makers and corporate bodies in areas relating to monetary policy, the volume of credit to be supplied and economic growth stabilization. The implication of this is not farfetched as research in the field could lead to a proper and more focused policy formulation, which would yield much better results.

We rely on the secondary data for this study of which the sources are the Central bank of Nigeria (CBN) statistical bulletin 2009 and 2010 versions. The research work centers on the impact of money supply on economic growth in Nigeria from 1981 – 2010, It is expected in course of this study that the researcher will examine and appraise the stock of money supply and its impacts with regards to growth in the Nigerian economy.

The Impact of Exchange Rates on Nigeria’s Economic Growth