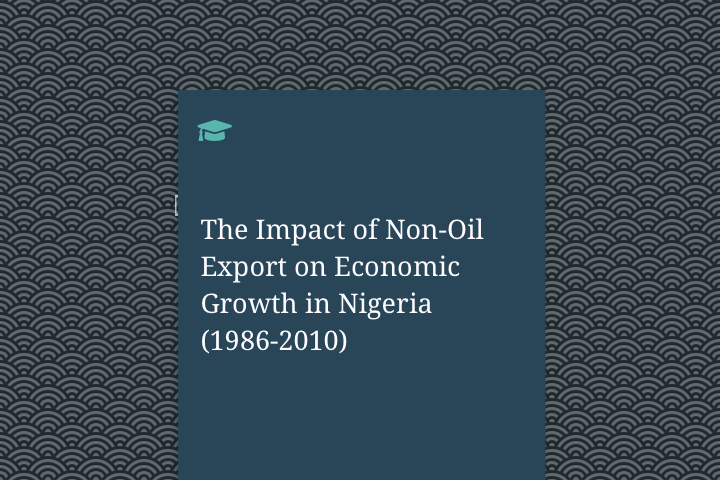 There is a number of reasons for a country to be concerned about its rate of economic growth. Economic growth is desired by both affluent and non-affluent economies. Economic growth is the desire for higher levels or real per capital income, real output which must grow faster than the production of the economy in question. Economists, policy-makers, public and private sectors work ceaselessly towards attaining economic growth by the use of development and growth models and policies. Among the policies used are trade policy (Import and export policies, monetary policy, exchange rate policy, fiscal policy, market etc). In this study, the non-oil exports and economic development in Nigeria will be examined.

Non-oil exports are the products, which are produced within the country in the agricultural, mining and querying and industrial sectors that are sent outside the country in order to generate revenue for the growth of the economy excluding oil products. These non-oil export products are coal, cotton, timber, groundnut, cocoa, beans etc.

Today, as in the past, the growth of Nigerian economy remains partly dependent upon increasing productivity of the agricultural sector. Helleiner (2002:124) states that no matter how much development and structural transformation achieved, it will remain its relative dominance in the economy to many decades to come. Precisely, it is from agricultural exploits that the economy has received its principal stimulus to economic growth.

Agricultural sector can assist through the exportation of principal primary commodities which will increase the nation’s foreign earnings and which can be used to finance a variety of development projects. The growth of the agriculture sector can make a substantial contribution to the total tax revenue, as well as having some implications for inter-sectional terms of trade. Also in the area of capital formation, the savings generated in this sector can be mobilized in development purposes, while increase in rural income as a result of increasing agricultural activities can further stimulate the product of the modern sector. The needs of the agricultural sector could indirectly influence the creating of additional infrastructures which are indispensable to rapid economic development. (Olaloku. 2001:13).

Another non-oil export to be dwelled on, is industrial sector. It is the fastest growing sector in Nigeria economy. It comprises of many manufacturing and mining. Nigeria has manufacturing base prior to 1960 and shortly after.

The problem was due to lack of modern technology skills, managerial experience of complex organizations and financial back -up. The problem was further aggravated by the colonialists’ merchants convincing arguments on the goodness of comparative cost advantage. Nigerians were coaxed into concentrating their efforts in the production of primary agricultural products and exporting them to the metrological industries in Europe.

Our industrial sector took off after independent relied on satellite firms representing British interest. The bank sector, which is constellation of colonial banks branches and some companies that were able to invest in manufacturing were the multi-national that have access to funds, technology and managerial expertise. This greatly hindered the progress of indigenous entrepreneurs.

The Nigerian manufacturing sector has been described by Ikediala (1983) as consisting of more assembling plants. He says that the implication of this is that the industries have very little backward linkage in the economy, since the bulk of the inputs is imported, thus the manufacturing sector depends on imported raw-material the extent of 42%. The capacity utilization of manufacturing industry has always been low in this country. The reasons as put by CBN (1998) are not unconnected with raw materials scarcity, consumers resistance due to high prices, increase in cost of manpower. Others mentioned are equipment breakdown due to poor technology, lack of spare parts. Time lags between, when inputs are ordered for and when they arrive, cash flow problems in industries becomes a permanent features.

The Nigerian Civil war brought about the deterioration of the oil palm grooves and plantation were abandoned and little if any new planting was undertaken. As a result of that, the output of palm oil and palm kernel declined drastically. But according to Onwuka (1985), the problems of palm products are due to the stagnation in the production of this commodity, which is partly explained by the presence of wild palm trees, which are of low-yield quality, and the difficulties experienced in harvesting them. In addition, the old system of pricing which guarantees low producer prices for palm produce discourage substantial investment from being made for further production of this product. Also, the problem marketing boards cannot be over looked. Marketing board is an institution set up by the government with the exclusive right to buy and sell certain agricultural products.

They purchase some products locally export sales are made through the Nigerian marketing company, which is jointly owned by all state, marketing. One of the functions of the marketing board is to stabilize the prizes or our cash crops and hence creates stability of income for farmers and to accumulate funds for development purposes. But the operation has failed to provide incentives to farmers to increase their input. Also, the producers paid unnecessary tax and they took from the producers some money, which should have gone to them as income. They thus reduced the amount of capital available to the producers.

This criticism, according to Adenira (1999) made the Federal Government to reform the Marketing Board System with a view to increase producers’ prices and income. He said that the essential features of the new reform are the prices, which are now fixed by a single authority while producer taxation (export duty and produce sale tax) has been abolished. Another major innovation in the system is the creation of commodity boards with responsibility of marketing specific products whenever they are produced in the country. These boards are likely to reduce administrative problems and be more economical compared with all oil-produced state Marketing Boards previously in existence.

The major fault of the successive government that are supposed to sustain this sector through the building of macro-economic structures and incentives diverted their attention away from agriculture. The result was sharp in the export/import equation as country started importing even palm oil that was hitherto imploring from Nigeria. The situation was becoming worrisome thus by 1975 there were attempts to recapture the lost of glory of agriculture. General Olusegun Obasanjo’s operation feed the nations becomes the first real expressed official attempt in this direction. It was followed by the establishment of two River Basin Development Authorities in 1977. By 1978/1979, the federal Government made budgetary provision to establish 4,000 hectares of mechanized farms in each of the 19 states then, by 1979, there was a re-launch of “operation feed the nation” with a new tag “Green Revolution” with various committees set for its implementation (Oko, 1999).

If the efforts of the two leaders-General Olusegun Obasanjo and Alhaji Shehu Shagari’s regimes could have brought vigor to the agricultural sector, the activities of the sic-commodity boards did not assist much.. Oko said that fixing export product prices without recourse to cost inputs discourages agriculture therefore remained slow because food demand was growing at the rate of 3.5% per in the 80’s while agricultural output was crawling at 11 %. Between 1990 and 1998 GDP in agriculture declined to 6.2%. Then the distributions of agriculture inputs to producers were neglected, infrastructure facilities like motorable feeder roads, and irrigation facilities etc, made it difficult to increase agricultural production. CBN mandate to bank with regard to bank loans to agriculture as priority sector for preferential leading was floated.

Nigeria remained a net exporter of agricultural products between 1960 and 1970. Goods exported included palm oil, palm kernel, cotton, groundnut, etc. agriculture through export of non-oil products has a rosy record contribution up to 80% of the gross domestic product and providing employment for over 70% of the working population. But recently that has been a steady decline in terms of agricultural product, to export and an abandonment of sector by a large percentage of the work force.

But the story of its decline is as pathetic as its impact on industry that relied heavily on the sector for raw material. Thus, the decline come with surge of revenue from oil (oil export). But the discovery of crude oil alone cannot be held responsible completely for the misfortunes or decline of the agricultural sector. The policy instruments put in place by successive government were more of lip service than concrete action. The creation of Marketing Board contributes greatly to the decline of non-oil export since the Board has the dole right to export the commodities. It is also pertinent to say that fixing of export product prices by Marketing Board discourage further private investments in the sector. Furthermore, the sector suffer from inadequate credit facilities, they have no security to back-up their loan applications. Those who are lucky to be given loans do not make proper use of them. Even existence services were neglected, infrastructure facilities not provided, CBN directives on agricultural loans floated.

This research has a particular focus that aims at examining the causes of growth in government revenue using non-oil revenue of the government as an instrument. The non-oil revenue spanning the range of products as agriculture and manufacturing. The major objectives are broadly defined as follows:

1.4.1 The study of the contributions of non-oil export to the growth of Nigeria economy is significant and important, for this knowledge, it will enable the policy makers to formulate appropriate policies that will aim at improving on the quote of the total revenue brought about by the non-oil sectors of the economy. This study is also important and significant in that it will examine the various ways of improving non – oil outputs.

This study will also evaluate the contributions of non – oil sector towards raising the living standard of Nigerians with in the period under review (1984- 2003).

Since not so much works have been done on the contributions of non-oil exports to Nigerian economic growth, this study will be of great importance.

1.5 SCOPES AND LIMITATIONS OF THE STUDY