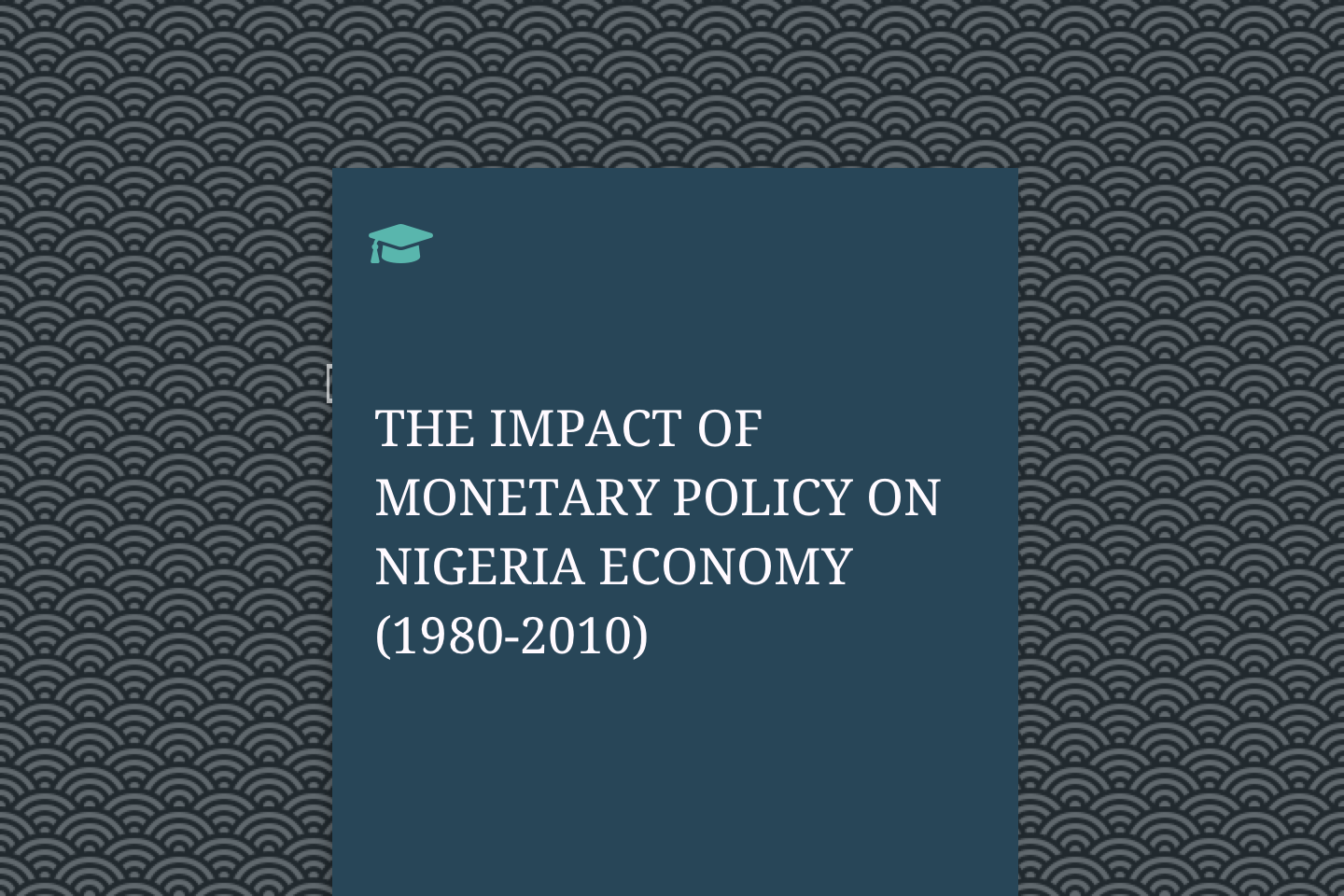 This research work was conducted to investigate the impact of the oil industry on the economic growth performance of Nigeria. In the process of the research, the ordinary least square (OLS) regression technique was employed. Considering the impact of time on changes in economic variables, the analysis was carried out using the simple regression method in which Gross Domestic Product (GDP), proxy for economic growth was used as the dependent variable, while the oil Revenue (OREV) and time appeared as repressor’s. A two-tailed test of 5% significant levels were conducted indicating that the two explanatory variables did not have any significant impact on growth performance of the Nigerian economy within the same period. The researcher therefore recommends that government should formulate appropriate policy mix that would motivate the firm in the oil sector to enhance improved performance and contribution of the sector.

1.1 THE BACKGROUND OF THE STUDY

The economy is the backbone of any nation. Nigeria, like other development countries of the world is paying more attention on how to accelerate the rate of development through the various sections of the economy.

Oil, a very versatile and flexible non-productive, depleting, natural (hydrocarbon) resource is a fundamental input to modern economic activities providing about 50% of the total energy demanded in the world excluding the former centrally planned economy. Oil exploiting countries of the world depend heavily on oil revenue for foreign exchange earnings and for the government budget, in most cases, reaching 90% or above.

Petroleum or crude oil is an oily bituminous liquid, consisting of a mixture of many substances mainly the elementsof carbon and hydrogen, and thus known as hydrocarbon. It also contains a very small amount of non-hydrocarbon element, chief amongst which are sulphur, nitrogen, and oxygen. Petroleum industry covers the exploration and production of crude oil as well as petroleum refining, marketing and servicing. Specific policy objectives with respect to petroleum and mining can be summed up us follows. Active government participation in mining operations, diversification of mineral products, the organization and regulation of the development of mineral resource so as to optimize their contribution to the overall national development effort, the conservation of the countries mineral resources, research into efficient extraction methods and wider application and use of mineral manpower development of internal self sufficiency in the supply and effective distribution of petrol industry products, commercialization of gas and the control of the environmental problems of oil production (Obudun 1987).

Though oil did not assume its present significant position in the natural economy until the early 1970s, it is not a novel revelation that it has since become the mainstay of contemporary Nigerian economy. Petroleum either as petrol, diesel,fuel, oil, lubricant or petro-chemical makes Nigeria’s economy wheel go round.
Petroleum has transformed poor nations into rich ones desert into watersheds and bankrupt nations into creditors. Specifically, with respect to Nigeria, there is no gain saying that the oil sector has undergone tremendous transformation over the years. (Anyanwa, et al 1997).

The industry has emerged from being merely the “supportive” economic sector it was in the 1960’s to the predominant source of foreign exchange and most viable access to international investment opportunities in the 80’s and 90’s, no other resources in Nigeria has played such a towering role over the national economy as crude oil. The government of Nigeria has used the revenue derived from oil through tax and royalties to carry out development projects in the country (Iyohu 2000).
This study therefore, aims to illustrate clearly the impact of oil industry on economic growth performance in Nigeria.

The over – dependence on oil has created vulnerability to the vagaries in the progressing section that shows the contribution of oil to some macroeconomic variables. In particular, the lace of oil in the psyche of the average Nigerian oil industry in 2003. The contradiction is more external earning for Nigeria, and also increased tax burden on imported refined petroleum products.

Some scholars have advocated for the shifting of emphasis from the oil industry to other sectors owing to their belief in the negative fallouts of the oil industry; some others opined that the sectors should be promoted and developed for its benefits. These opposing views have created the problem of acceptance or otherwise of the oil industry in Nigeria.

In view of the controversy with respect to the relative contribution of the oil sector compared with other sectors, it is imperative to establish empirically the relative impact of the oil industry in the Nigeria economy.

With the development of petroleum in the Nigerian economy, there has been a growing interest and concern towards its contributions to the economy and economic growth. By the end of the research the study aims at achieving the following objectives.

The study will be beneficial to the following:

This research work is an investigation into the impact of oil industry on economic growth in Nigeria (1980-2010).
In carrying out this research work, the researcher encounted some difficulties. The first of such constraints or difficulties concerns data collection from different sources. Also was the reluctance of some library or Liberians to make data available.
Apart from the above mentioned constraints, which are capable of adversely affecting the accuracy of the results of this research work, all other errors and omissions are entirely those of the researcher.

AgbeJule T.A.O.L. (1987) “Collection of revenue in Nigeria”, seminar held at the Federal Place Hotel, Lagos.
Ailemen, M.I. and Oleosodo, L.A. (2000), The Oil Industry and Environmental problems in Nigeria(A Case study of Nigeria Delta Area).
Biodun, AdedipePh.D, The Impact of oil on the Nigerian economy.
Obadan M.I, (1987) The Impact of petroleum on the Nigerian Economy.