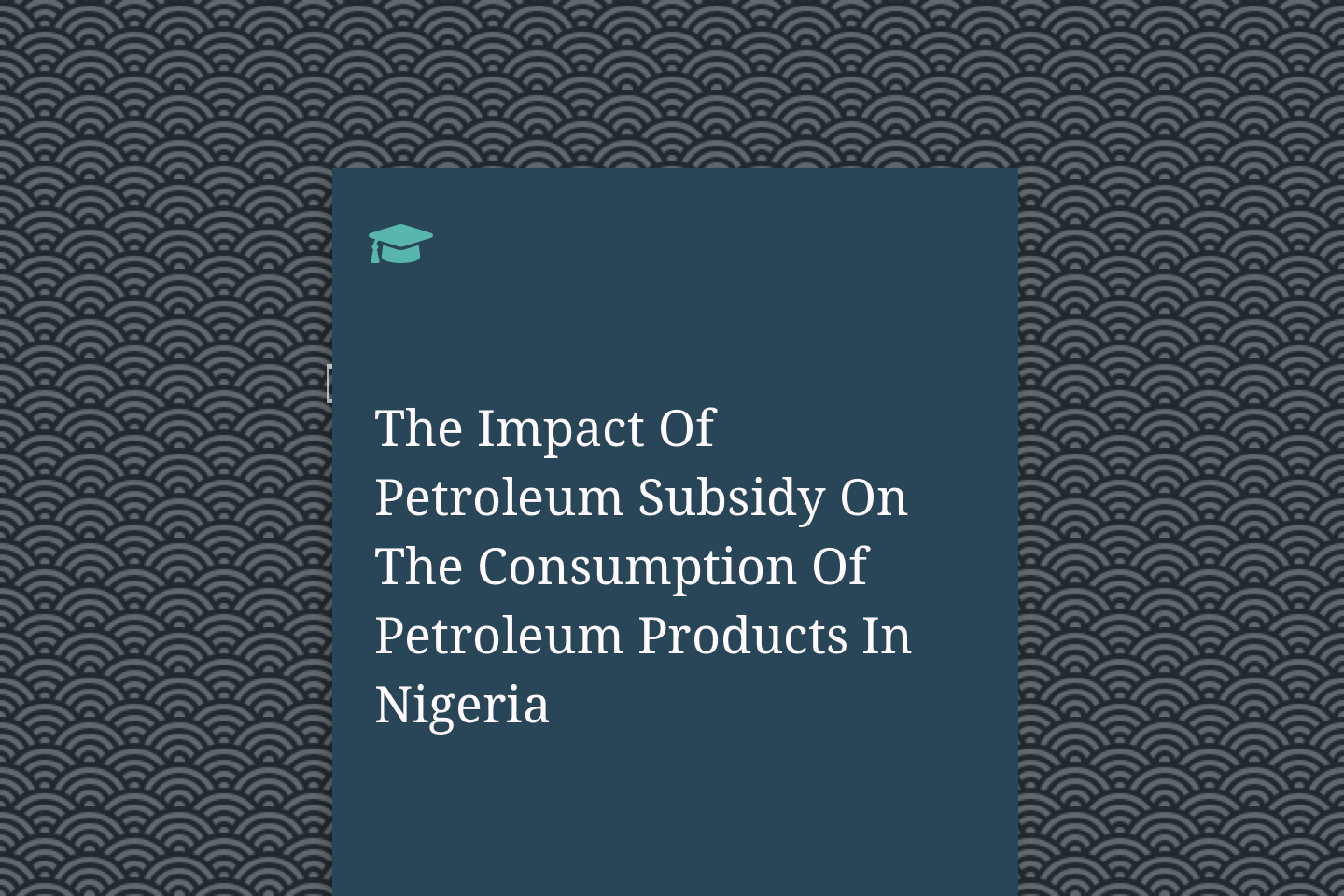 The petroleum sector is an indispensable body in Nigeria economy. It has remained the Nigerian biggest revenue earner. It still brings in more than 80% of the foreign exchange earned by the country. However, this resulted in the shortage of the quantities of petroleum products consumed locally in the country. Hence, the problem of development is generally faced in Nigeria. This work will as well go to show what actually constitute the petroleum subsidy in Nigeria. It will analyze the cost to the government if not removed and the welfare of the local consumers. It will also reveal to a greater extent what effect it has on the GDP of the economy, at its full sustenance, partly to be taken in the issue of petroleum subsidy in Nigeria. The research work used a dummy variable to explain its finds(1 when there is subsidy and 0 when there is no subsidy).The research work however, looks into the impact of petroleum subsidy on the consumption of petroleum products in Nigeria and it was found that there are more consumption of petroleum products with subsidy than without. Among other recommendations the study opines that government should diversify the economy as quickly as possible and direct its positives to other sector of the economy that have been overlooked.

Petroleum subsidy is one of the most passionate and controversial issue of the Nigeria‘s petroleum industry irrespective of the technical, economic, political aspects and implementation of politics adhering to one pricing system or another would largely hygiene the ultimate pattern of cost and profit sharing of the two major parties concern that is the producer (NNPC) and the consumers.

The momentum generated by the exploitation and exploration of oil has been regarded by many as a “mixed blessing”. Nigeria started exploring its petroleum resources in the mid 60’s, however, it was until the early 70’s that large scale production was realized in Nigeria and by May 1970, had entered the league of the largest ten oil producers and by1973, oil accounted for over 80% of our foreign exchange earnings.
The presence of petroleum and the greater spending power which followed has no doubt acted as a catalyst in Nigeria‘s economic development constraints-finance. Consequently, however, it has given rise to the planning executive and completion of some worthwhile project and has given a stronger “twice” to Nigeria in international politics.

The oil arrival created its own problems, given Nigeria‘s absorptive capacity conceived in its widest context. There have been adjustments. However, not only has the petroleum power created illusion in the economy, it has given impetus to false hope. Many policy decisions were not given through thought since finances was not a constraint.

The consequences of FESTAC and UDORJI award are still with us. The enormous financial power also led to the federal government over extending its activities and responsibilities resulting largely to waste and inefficiency.

Petroleum subsidy has been removed several times in the past years beginning from 1980 to present, because of the drastic reduction in the government revenue as a result of oil glut in 1981 and the attendant austerity situation, also because of the loans collected from the international monetary fund (IMF). This is to enable the country to meet up with its foreign debts. In 1986 the federal government removed 80% of the subsidy on the price of petroleum products. The second tier foreign exchange marked (SFEM) and its successor foreign exchange market (FEM) inflated the remaining 20% subsidy to nearly (100%) because of the decline value of naira via-a-vis the us dollar.

The federal ministries of information disclosed sometime in 1987 that government would save or gain more than N6 billion per annum in revenues if petroleum products were correctly priced. He analyzed that the cost of producing one barrel of petrol was N110.79. It was sold locally for #35.48 and showed a loss of #75.79. It was the intention of government to stop this loss, but the percentage of subsidy removed will be such that people will suffer undue hardship. It was contended that the removal would generate additional revenue to the government. It would also conserve petroleum products for export and so earn additional foreign exchange.

More so, the heavy subsidy of petroleum products contributed to the lopsided development of the Nigeria energy system. It was also inferred that the extra #6 billion could be used to support the economy and provide social amenities.

Currently the objective of subsidizing, that is to aid the poor- stabilize prices, promote economic growth which have not been achieved rather NNPC resorted to massive importation of products to stem the scarcity. The short fall between the landed cost of imported products and their selling prices are also the subsidy claim by NNPC. This so called subsidy can be justified for now and until such a time that the power supply situation in the country improves to the extent that it enables the ordinary Nigerian to work hard enough to raise his income level to a level absorb future increase in petroleum products, and until there is an acceptable level of infrastructural development to cushion the impact of increased cost of petroleum products.

It is self-evident that as at the year 2000 there is no subsidy removal or whatsoever on Petroleum products in Nigeria. Indeed, from current cost of refining at $10 per barrel sold to the NNPC refineries, the price of petrol (PMS) should be #15 per liter as against the pump price of N22 per liter. Thus the current price of PMS includes sufficient government task indicating that no subsidy exists on the current product prices.
More so, when the naira hopefully recovers its lost grounds, a new (reversed) twist may be given for the problem of petroleum subsidizes. It goes to show that whatever the action the government may take on petroleum between 2000 and the year 2003, it probably will not be the last word on the matter

Nigeria is one of the major sources of crude oil in the world. The importance of petroleum to Nigeria can only be appreciated when one realizes the dominant role it plays in our economy. Petroleum products and export is the main stay of the Nigerian economy providing almost 90% of our export earning locally petroleum products are used as major sources of energy for the industry.

The dollar removal of subsidy and thus, increase in local prices of petroleum products has generated a lot of attention lately. All this reduced us to delve into the study of the economies petroleum subsidies in Nigeria

1.2 STATEMENT OF THE RESEARCH PROBLEM

During the national debate on the international monetary fund (IMF) loan, in 1985, most Nigerians oppose to the withdrawal of the so-called government subsidy on petroleum products in Nigeria, which was part of the (IMF) conditionality‘s. But the military government rejected the loan; it went along in 1986 to remove 80% of the subsidy. While the economy was still battling with the inflationary consequences of this, the second-tier foreign exchange market (SFEM) was introduced.
In addition to refueling inflation, SFEM introduced other distortions in the economy. One of such distortion is the pricing of petroleum products in Nigeria. Therefore, the need to review the domestic price of petroleum products has become necessary for the following problems.

The domestic price of local products is well below what operates in other countries including our neighboring countries. This low price level, for petroleum products has tended to encourage the usage of products as amply demonstrated in the growth pattern, which is not explainable on the rate of industrial growth of the country. Furthermore, this price differential has encouraged active trafficking in products across our borders and shores. The result is that government is subsidizing a much larger population in respect of petroleum products.

The creation of distortions in the consumption of petroleum product. Subsidy discourages consumers (especially the private sector of the economy) from being cost conscious.

The current level petroleum prices does not adequately account for the capital outlay and overhead incurred in manufacturing and distribution of petroleum product in Nigeria.

The early 80% subsidy withdrawal and the impact it has on the economy, plus the effect of oil glut on prices of petroleum product, coupled with inflation which has eroded the expectation of the government in relation to the generation of appropriate revenue.

1.3 THE OBJECTIVE OF THE STUDY

The following research questions would serve as a guide to enable this project achieves its identical problems solution and objectives. Which depends mostly on the impact of petroleum subsidy on the petroleum production and consumption in Nigeria and what government should do in order to boost stability in the economy via petroleum consumption?

1.5 THE STATEMENT OF THE HYPOTHESIS

Based on the available information and data, this researcher will be able to test the following hypothesis whether to accept and or reject them. This gives the researcher the insight to make the decisions and policy recommendations using a common decisions rules and certain level of significance. It follows:-

1.6 THE SIGNIFICANCE OF THE STUDY

Based on the work, references are to be made on the production of petroleum in Nigeria, with special touch on pricing policy and the marketing strategy of petroleum. There will be general overview on the concept of subsidy and cost analysis in the petroleum industry, major elements of and basic assumptions for, the calculation of crude oil and consumption.
There will be a general overview of cost-benefit analysis of petroleum subsidy in Nigeria, particularly, to what effects its withdrawal and sustenance will have on the economy, influence of structural adjustment programmed (SAP) on petroleum subsidy, SFEM and subsidy will be reviewed, the nature of the country without oil will be looked into.