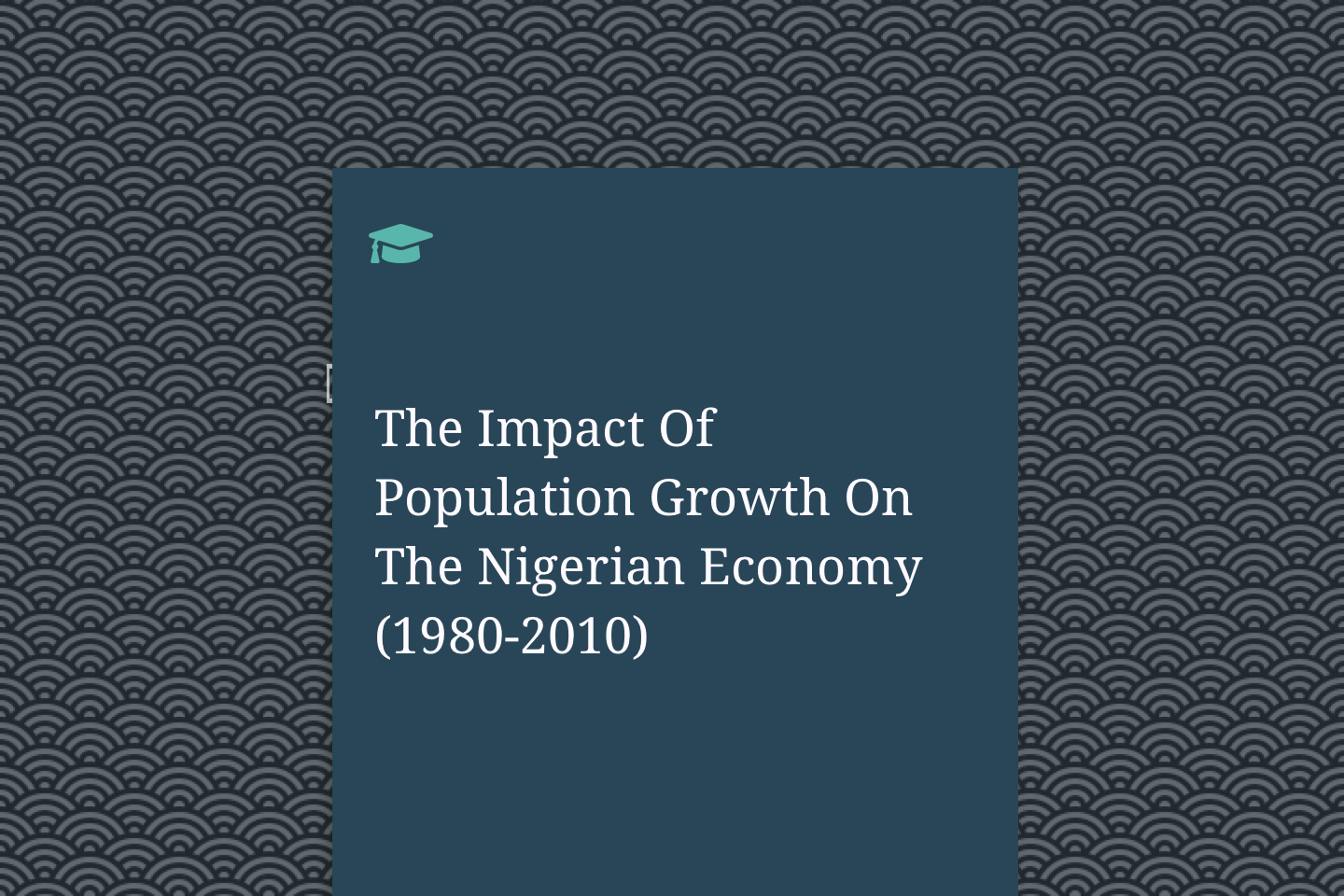 1.1 THE BACKGROUND OF THE STUDY

Therefore in every discussion, it is conventional to start with a definition of terms used in such discussion. However, population growth can be seen by a demographer as a change in the size of the population. But when this change occurs in such a way that it reduces the size of population, the demographer refers it as a negative growth but when it adds to the size of the population he regards it as a positive one. What we get from this concept is that population growth can be positive or negative depending on whether there is an increase or decrease in the size of a given population. Population whether positive or negative is derived from three demographic variables such as birth, death and migration rates.

Udabah (1999) Threw more light on this by adding that birth and death rates in underdeveloped countries are quite different from that of developed countries. Births rate in underdeveloped are generally high, why those of developed countries are low. On the other hand, death rates are higher in underdeveloped nations. The higher rate of population growth is therefore a major characteristic of underdeveloped nations and is partly responsible for the low rates of economic development.
Moreover, the population of any country constitutes the most vital component of its resource base. This aspect is based mostly on its size, growth rate, spatial distribution, demographic structure and quality in terms of level of education, fitness and social welfare. Population statistics are indispensable impute into the planning process in any area. To government issuing programmes for instance in the efforts of government in the developing countries to feed the people and also provide quality services for them are being frustrated by rapid population growth. This growth is attributable on the one hand to improvement in human survival associated with the application of modern medical science to health matters, better sanitation and immunization of children which have caused the death rate to decrease.

On the other hand, so many socio-cultural issues have complimented the growth of population in Nigeria positively (Lee and Miler 1990, Rennne 1995, Ainsword et al 1996).

Consequently, the world population has been increasing and the last two decades have been demographically unprecedented as it rose from 4.2 billion people in 1985 to 6.4 billion in 2010. Much of this occurred in the developing nations as their population grew from 3.7 billion to 5.1 billion as against that of developed nation which grew from 1.1 billion to 1.2 billion over the same period (United Nation 2001 billion).

Nigerian‟s population is one of the fastest growing population in the world and Nigeria is the most populous country in Africa, ranked the tenths as obtained from two major sources, viz the 1991 census and the Population Reference Bureau World Population Data Sheet.
Obviously, the population of Nigeria is large which makes it a “giant” relative to the other Africa countries. The large population of Nigeria implies a large market for goods and services as well as large pool of human resources for development. However, the impact of population on development depends not only on the absolute size but also on its quality. The major function responsible for the rapid increase in the population of the country is the relatively high fertility level as portrayed by a total fertility rate of about 6.0 life – birth per woman in the 1990’s.

Nevertheless, economic growth is the GDP OR GNI divided by the total population of the whole country. This measures the level of output in the economy. This equation implies that if population is rapidly growing, the economic growth will reduce marginally and people income will also decrease. So according to the finding, GDP can be improved that is GDP per capital by checking the population growth rate through birth control, death rate, migration and some other economic variables and demographic variables.

Fundamentally, growth is an indispensible requisite for the development that is why Nigeria‟s economic growth had continue to dominate the main thrust of government paramount objective more importantly, growth is associated with policies of control population growth because a high population lead to a vicious depletion of a nation‟s financial and material resources. According to CBN (1997) the population growth rate of Nigeria is at an average of 2.83% from 1993 to 1997 as compared to developed country like United States whose population rate is 1.00% on the average. This rapid population growth has efficiently induce wide spread poverty. According to Chege (1992), Nigeria became worst than the early post-colonial period. In the 1980‟s the agricultural sector declined in productivity by 1.3% while population grew by 3.1% thus creating severe food shortage, a fall in capital income, a fall in savings and living standard . Because of this type of situation economic growth been severely retarded and dwarfed.

The above presentation points to the critical stance of the economy and therefore makes a clarion call for adequate measure to control the growth rate of Nigeria‟s population which is at 2.8%per annum. To check this, we require constructive demographic policy approaches that will seriously enlighten citizens of the eminent socio-economic danger of rapid population growth.

1.5 SIGNIFICANT OF THE STUDY

The utility of this research work is restricted to the exclusive focus on population size and growth.

The Impact Of Industrialization On Nigeria Economic Development