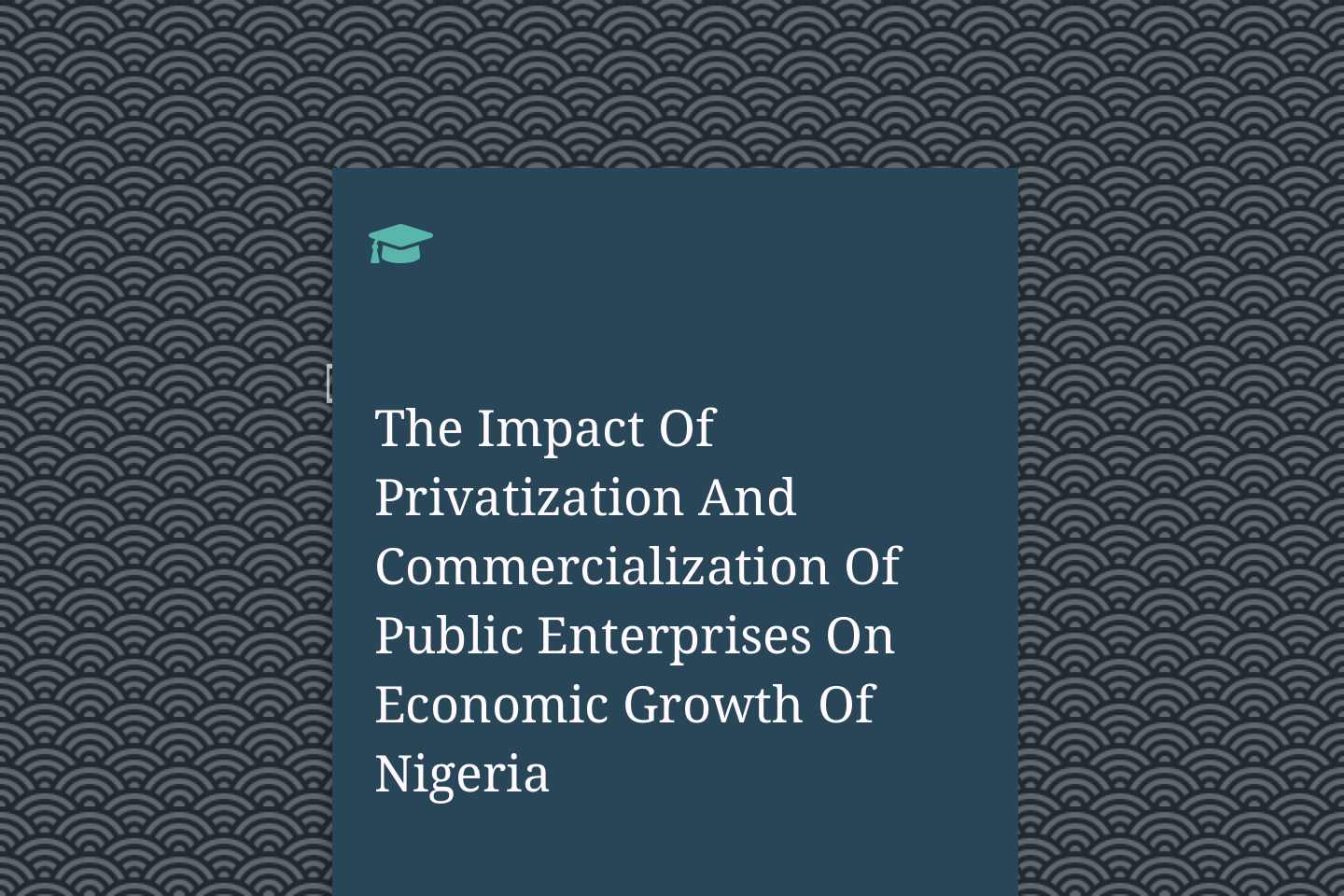 So much effort has been made towards understanding the relationship between privatization and commercialization and the economic growth of Nigeria. Privatization and commercialization of pubic enterprises in every economy is introduced for the attainment of specific objectives which includes economic growth and stability. Data was collected and analyzed using ordinary least square method (OLS). The result of the study shows that there is a positive but insignificant impact of private investment on the economy, this due to lack of investment in the private sector. On the strength of this evidence, this work recommends that the government should allow the private sector to establish major companies like electricity generating companies, water supply companies etc. This study finally concludes by saying that the impact of privatization and commercialization of public enterprises on economic growth can only take effective progress when the enterprises are wholly or partially in some cases handled and controlled by the private owner whom will not relent in the optimization of profitable enterprises.

Several experts and informed opinions have presented privatization and commercialization as one of the bitter pills to be taken by Nigeria’s in order to recover from economic slump, it to a great extent helps to solve some vital problems that has led to the untimely devastating problems is the syndromes of “not- my fathers- work” which has greatly and negatively affected both smooth running and performance of the these enterprises. The privatization policy was recommended by the onside report of 1982 by the Athakem study group of statutory corruptions and state owned corporations set up in September 1984, the competence of chief Executives of Nigeria public enterprises held in Jos, plateau state in May 29-30, 1985 and by international minatory fund, as a condition for is loan to Nigeria.
Public enterprises in Nigeria has been considered as inefficient and wasteful, this is because they have viewed it wish the profit criterion. According to a school of thought asserting the activities for public enterprises with the profit criterion is not always a fair judgment economic activities, it is usually not appropriate to us the performance standard of the private sector “they are horses of different colours”. Unfortunately, the Nigerian public sector enterprises have failed in this efficient and effective provision of the services for which they were established. Infact it was this feeling of failure and crimelessness arising from the increased difficulty in the government that prompted the proposition of privatization policy in Nigeria.

Today, the received wisdom is that the state should recede and that private ownership of means of production is the only viable approach to efficient production f goods and services, economies growth and development. Nigeria has more than 1,800 public enterprises at Federal and state level which can be categorized as follows:

It is important to note that the introduction of SAP in 1986 serves as a bench mark in economic policy-making in Nigeria with the resultant, liberalization, deregulation, Privatization and commercialization measures. The critical question here remains how many of these policies have been able to resituate the political economy of Nigerian and in true alleviating the yearning and aspiration of the working class.

a. Corruption
b. Lack of Transparency
c. Lack of accountability
d. Inconsistency and,
e. Incredibility

However, it is based on these problems that the basic propositions of this Privatization and commercialization program are being hindered. It is important to note that he major function that informed the establishment of these public enterprises are to control the resources and raise funds for the provision of certain infrastructural facilities particularly in services requiring heavy financial investment e.g. railway, telecommunication electricity etc, also tope form the function of generating revenues that will add to financial development program and projects as reliable instrument for the crucifies of jobs and ultimately facilitate economic growth and development. In trying to look into these discrepancies and proffer a way forward toward a state of Privatization and commercialization of public enterprise in Nigeria that enhances economic growth and development this research work emanated.

This study has a main objective of finding out the impact of Privatization and commercialization of public enterprises on the Nigerian economy.

It is against the background pf problem identified and the objective of the study that the underlisted hypothesis was made:
Ho :βo : β1 = β2 = 0 (Null Hypothesis)
This means that the process for Privatization policy made no significant impact on the economic growth of the Nigerian economy.

This research work will be of great importance to the researcher, because it will enable her to know the importance of privatization in the economy of this country (Nigeria). It would also help to develop her personal knowledge.

The research will also help the government to understand those benefits that privatization and commercialization program embodies which we have neglected and politicized within the past. In understanding this on the side of the government, it will allow them to retain and work towards real implementation of it and thereby creating room for the rapid growth and development of this country.

Finally, the research will be useful to the students of economics and other field, who wish to know more about privatization and commercialization.

The research work is focused on the impact of privatization and commercialization of public enterprises on the Nigerian economy from 1980 to 2010.

Definition of basic concepts is important so that the study will be made meaningful, some definition of terms used in the study are as follows:

a. Privatization
This is the process of transferring ownership interest and control from a government owner enterprise to a private sector. It can also be said to be the transfer of ownership and central of enterprises from state to private sector. Ogunna defined privatization as policy of selling off public enterprises to individuals groups and organization so that as private organization they should operate under the principles of profitability, effectiveness, efficiency and viability rather than in a public interest. Ikeme, (1997) defines privatization as any of the variety of measures adopted by the government to expose of public enterprises competition or to bring in private ownership management or control into public enterprises and accordingly to reduce the weight of public ownership or control or management.

b. Commercialization
This concerned with the reform of public enterprises to achieve high efficiency and productivity without change of ownership.

c. Public Enterprises
These are any corporation board, company or parastatals established by or under any enactment in which the government Federation has ownership or equity interest. As defined by Ademolekun (1985) they are organizations that engage as a result of garment activity in the capacity of an entrepreneur.