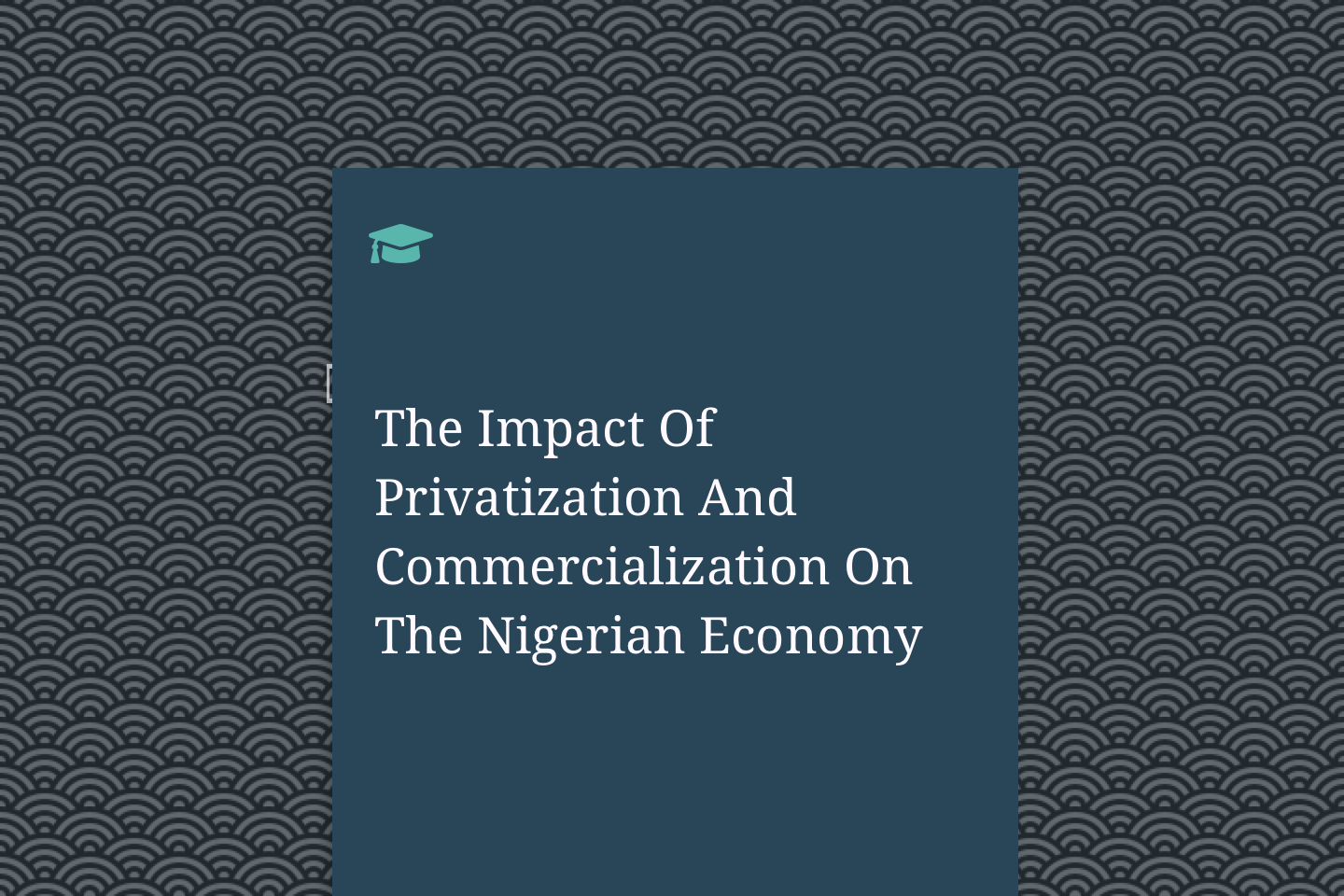 To be able to transform into an industrialized economy an underdeveloped economy has to privately and commercially develop. The importance of establishing public enterprises or corporations began during the 19th century with the British Telecom in 1884 under the telecommunication act and gained a worldwide support in Britain. Thereafter several nations particularly those in Africa, have come to embrace the principle as a way of eliminating low performance and inefficiency in the public sector.

Following the trend, the Nigerian economy has come to embrace privatization as a cardinal principle of the state‟s economic policy. Over the years, the Nigerian government has encouraged the development of the public sector since independence in 1960 and particularly 1970s but has not been successful because government owned industries and establishments remain citadels of corruption, studies in inefficiency and consequently a heavy drain on the economy. As a means of combating this menace, the (IMF) international monetary fund and World Bank have advocated the twin policies of privatization and commercialization. Incidentally, Nigerian has fully adopted this policy and is embarking on it with freazy, for example, Nigeria Brewery change from the most inefficient and less making company before privatization to one of the most profitable businesses in Nigeria. Nigeria has more than 1,800 public enterprises at federal and state level which can be categorized as follows:

The purpose of improving national economic is to improve the quality of the life the people and not to create easy avenues for foreign exploitation. Nigeria believes fully in international trade and relations provided they make life of Nigerians better. Mainly IMF and world bank prescriptions have been fully tries Nigeria in SAP (structural adjustment program)in the last two decades but, they have made Nigeria much Poorer and miserable. No nation surrenders the bastions of its economy to foreigners without adequate control except in colonial rule. If government wants deregulation it must be in accordance with the deregulation as emaciated by the ordinary people, private sector, while the public is expected to create right environment for growth and set the policy frame works.

In a developing country like Nigeria, privatization and commercialization of public enterprise is considered by many as a vital tool for the growth and development of the economy. In Nigeria some of the problems facing privatization and commercialization program include: Lack of accountability Corruption Lack of transparency Inconsistency. It is important to note that the major function that inform the establishment of these public enterprises are to control the resources and raise funds for the provision of certain infrastructural facilities particularly in services acquiring heavy financial investment e.g. railway, electricity, telecommunication etc, also generating revenue that will add to financial development program and projects as variable instrument for the creation of jobs, and ultimately facilitate economic growth and development.

However it is based on the problems, that the basic propositions of this privatization and commercialization program are being hindered. In trying to look into these discrepancies and proffer anyway forward towards a state of privatization and commercialization of public in Nigeria that enhance economic growth and development, this research work emanate. Before the introduction of SAP (Structural Adjustment Program) in Nigeria Anyanwu (1993,251) reconciled that about 500 companies and parastatals in which the Federal government had invested over N36 million naira as equity and sub-ventures from which she has been realizing less than N500 million only annually. These also incurred huge debts which are rapid and serviced by government. Also government spent about 40% of its capital investment budget on public enterprise, the provision of whose goods and services were often costly, inefficient and subject political manipulation and thus federal government decided to privatize and commercialize fully some of its public enterprise. This policy however, has been characterized by several problems like corruption, transfer of assets, siphoned of public funds, political manipulations etc. Ogbonna (2004) recently the senate invited the former heads of bureau for public enterprise Matlan El-Refai, Mrs. Ireme Chibue etc. to sat about 50% of the government companied, that have been privatized failed to operate properly due to lapses in the process and to give details of hour which was generated and which account monies will paid into (Daily sun 20/06/2011;8). According to Nwosu (2007), privatization under mines growth, exacerbate perpetuates economic, social and political injustice, between the healthy class and poor majority perpetuates foreign economic domination, jeopardizes social welfare and human conditions in the society. Therefore it is on this ground that the research focuses on the extent to which privatization and commercialization have affected the economy, examining the effects of the program on the Nigerian economy.

1.3 OBJECTIVE OF THE STUDY:

According to H.R Zayyad they are many objectives of the program privatization and commercialization:

Hypothesis is a reasonable guess or intellectual guess or suggestion based in facts and assumptions stand to be rendered valid or invalid. The following hypothesis has been drawn by the purpose of the study:

1.5 SIGNIFICANCE OF THE STUDY:

This research work will help the government and reader understand those benefits that privatization and commercialization program embodies which we have neglected and politicized within the past. In understanding this on the side of the government, it will allow then to return and work towards real implementation of it and thereby creating a room for the rapid growth and development of this country.

On the other hand, it will go a long way to create an avenue for more academic research. The important of any research is to find out solutions that faces mankind and the environment of the society. The study creates awareness to every citizen of this country and commercialization of this privatization are
commercialization of public enterprise in Nigeria economic development.

The scope of this research work focused strictly on the impact of privatization and commercialization programmes on the Nigerian economy 1980 to 2010.

Privatization can be defined as any of the variety of measures adopted by the government to expose a public enterprises competition or public enterprises and according to reduces the right of public ownership or control or management (IKEME, 1997).

COMMERCIALIZATION: This is the act of making a public operation more profit oriented, as private individuals are employed into management for efficiency while the ownership and control of the company still remains with the government.
PUBLIC SECTOR: This is a sector in the economy that is dominated by the government, the private individuals and capitalists play a minor role. Here, government regulates and control the activities.
PRIVATE SECTOR: This is a sector in economy that is dominated by individuals or investors and capitalists. In this sector there is little or no government regulation of activities.
DEREGULATION: This is the act of removing restriction on the activities of a sector where governments have more control and domination over the private individuals or capitalists. Therefore, it is the removal of policy guidelines that restricts the operation. In that the government reduces its control in the sector of interest.
PUBLIC CORPORATIONS/ENTERPRISES: As defined by (Demoloun 1963) are organization that change as a result of government activity in the capacity of an or corporation built, owned and managed by the government. They are being financed by public funds especially through taxation and also operate on monopoly.