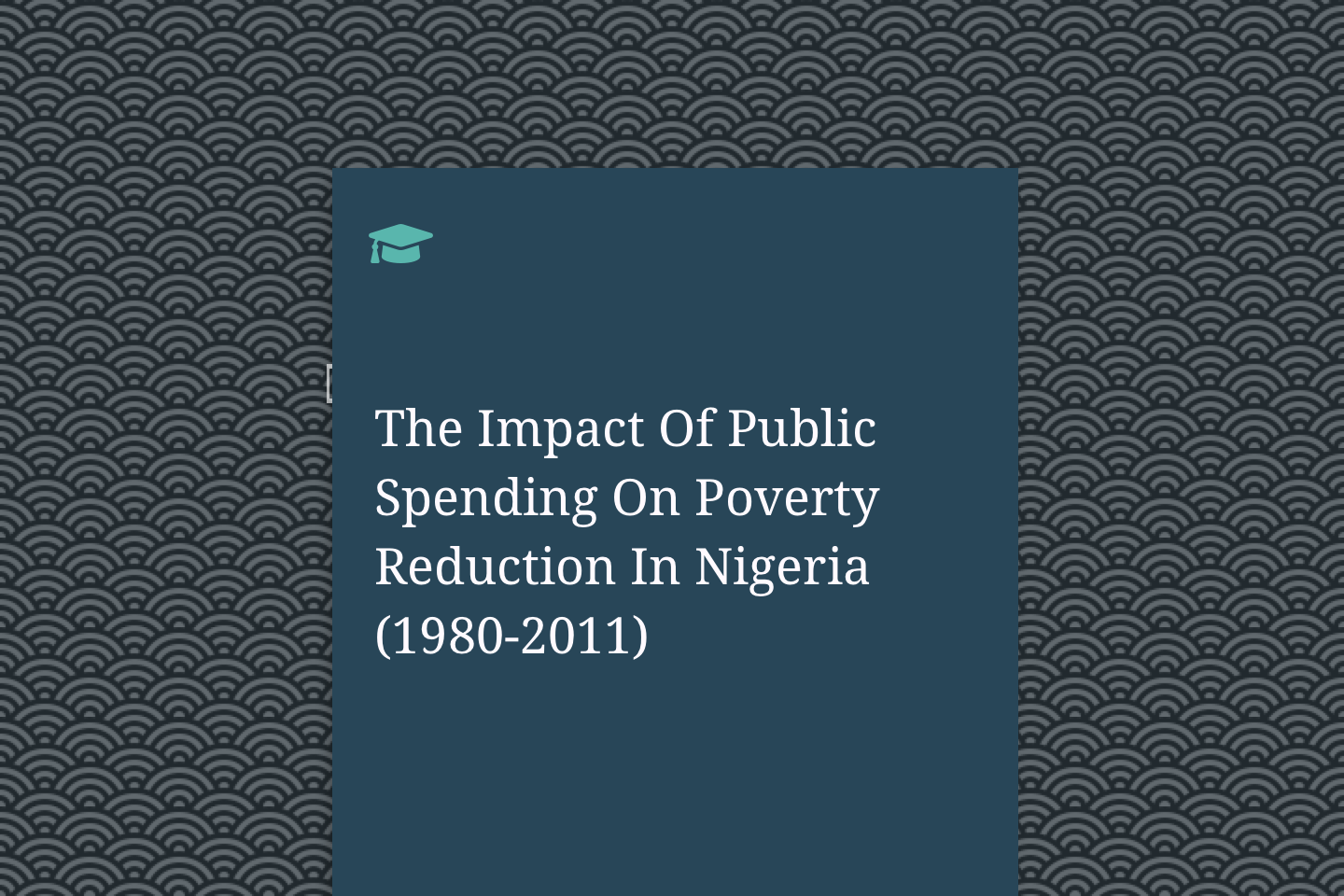 This work was done to analyze the impact of public spending on poverty eradication in Nigeria from (1980-2011). In this research work, multiple regression analysis was used and five variables were used in the empirical analysis. They are government expenditure on agriculture and water resources (AGWR), health (HTH) education (EDU) transportation and communication (TRCM) and Housing and environment. The data used in this research was collected from secondary data obtained from National Bureau of Statistics (2008) (MBS), and CBN statistical bulletin. The major findings shows that government expenditure on health, education and transport and communication are insignificant and a unit increase of government expenditure in these sectors will reduce poverty level. While that of agriculture and water resources, and housing and environment are significant and a unit increase will increase poverty level. Recommendation were proffered based on the findings of this research. That the government at all level should ensure that its expenditure are channeled towards projects that will reduce poverty level in Nigeria.

Public spending represents the annual expenditure by the federal government to achieve some macro-economic objectives which may include poverty reduction, increase in national productivity and macro-economic stability in the system.

Since the late 1980’s, an increase in public spending has become a major instrument in Nigeria. This was attributed to the following reasons as the major causes of an increase in government expenditure in Nigeria. First is the dominant role of public sector in major economic activities in Nigeria. This could be attributed to several factors among them are oil boom of the early 1970’s, the need for reconstruction of war affected areas after Nigerian civil war in 1970, the industrialization strategy adopted at that time by the federal government (import substitution strategy) and the need to raise gross domestic product (GDP).
On the other hand, the collapse of oil prices in and general mismanagement of the economy in 1980’s brought the issue of poverty eradication in Nigeria. Furthermore, the recent flood disaster in Nigeria has re-awakened the fight against poverty in Nigeria. In the mid 1980s, it was observed that the private sectors were declining in economic activities as measured by aggregate output, industrial production, non oil exports etc. were all showing decreasing signs. Above all, there widespread evidence of massive poverty in the economy despite of the growing public expenditure and fiscal deficit in the economy (library of congress country studies 1980’s).

In 1986, all major socio-economic indicators were showing downwards which brought high rate of unemployment and decreased in purchasing power. Poverty was spending among Nigerians especially the low income earners and economic growth was downward sloping.

Poverty in Nigeria did not become an issue of great concern until after the oil boom when the international oil price crashed and there was an international economic slump. The continuous downward trend in the oil prices in the international market increased the poverty level in Nigeria. The over-dependency on oil revenue and inadequate efforts to mobilize funds from non oil sources led to a serious decline in government revenue. External reserve deteriorated, and cause huge accumulated trade arrears and thereby limiting government effort in provision of basic amenities and social facilities.

Thus the poverty level in Nigeria continues to be on the increased over the past few decades. The 1991 world development report (WDR) showed that Nigeria the most populous country in Africa has a significant number of her population categorized as poor people.
In recognition of the adverse effect of poverty in Nigeria, federal government set up Structural Adjustment Program (SAP) to reduce over dependency on oil and to provide food to all Nigerians. This had been followed by the introduction of other policies such as national FADAMA programs. Furthermore, the federal government made poverty reduction the core objectives of its annual budget and also initiated various policies measures aimed at promoting people’s welfare and reducing poverty in the economy.

Poverty become an issue of global dimension with nations striving either to reduce or outright poverty in there economy. The complexity of the phenomenon and its impacts on national economics has attracted the attention of international organizations and agencies with government in different nations embarking on policies aimed at reducing poverty. Consequently, Nigerian fiscal policies especially as regard expenses in the areas that have positive impact on the well being of the poor, have progressively being on the increase over the years. Recently, the Imo State government took a bold step towards poverty reduction by introducing free education to all the indigenes of the state up to the tertiary level.

Finally, the extent to which government spending have impacted on the well being of the people prompted this study.

In Nigeria, poverty has been on the increase which can be attributed to inequality existing in the economy such as corruption, macro-economic instability and inconsistency in government policies. In an ordinary framework, poverty is concern with absolute, modulate or relatively standard of living or inability to attain a minimal standard of living. Poverty is found to be at the worst in the rural areas. Which is characterized by malnutrition lack of standard education, low life expectancy and sub-standard housing? In attempt to alleviate these problems, three actors are observed in the literature as being involved in any giving country. Namely; the three ties of government (federal, state and local government), international organizations and nongovernmental organizations (NGO’s).

In the context of this study, the following objectives will be achieved.

1.6 SIGNIFICANT OF THE STUDY

A research to investigate the impact and relationship between public expenditure and poverty reduction in Nigeria occupies an important detail which cannot be over-emphasized. The parastatas responsible for poverty reduction in Nigeria will find this study useful as it will unveil the current poverty profile and better strategies to alleviate them.

In the other hand, the federal government will benefit from this because it will help them to channel public fund on the economy judiciously.
Finally, the rural dwellers whose represent gross poverty in Nigeria remains the most beneficiaries of this study because it will help government to make policies that will promote their standard of living.

This study is limited to analyze the impact of public expenditure and poverty reduction in Nigeria from 1980-2011. The choice of this period based on the economic history. The 1980s witnessed a radical change in Nigerian economy, which led to the introduction of structural adjustment program (SAP). It also the period when the standard of living index fell, was resulting in further rise in the incidence of poverty.

Furthermore, looking at how government expenditure helps in reducing of poverty, not all sectors of the economy were used. The sectors are those that have direct impact on people’s welfare, which include agriculture and water resources, health, housing and environment, education, transportation and communication.
This research work suffered some limitations because research in economics has never been easy with the researchers. In most cases the researcher is threaten to a number of factors such as; the mobility of involve in this research was stressful; the time required to carry out this research was highly limited as the researcher required time for other academic activities.

Finally, despite of the above problems encounted, by the special grace of God, the objective of this study will be achieved.

The Impact Of Minimum Wage Fluctuation On Growth Of Nigerian Economy