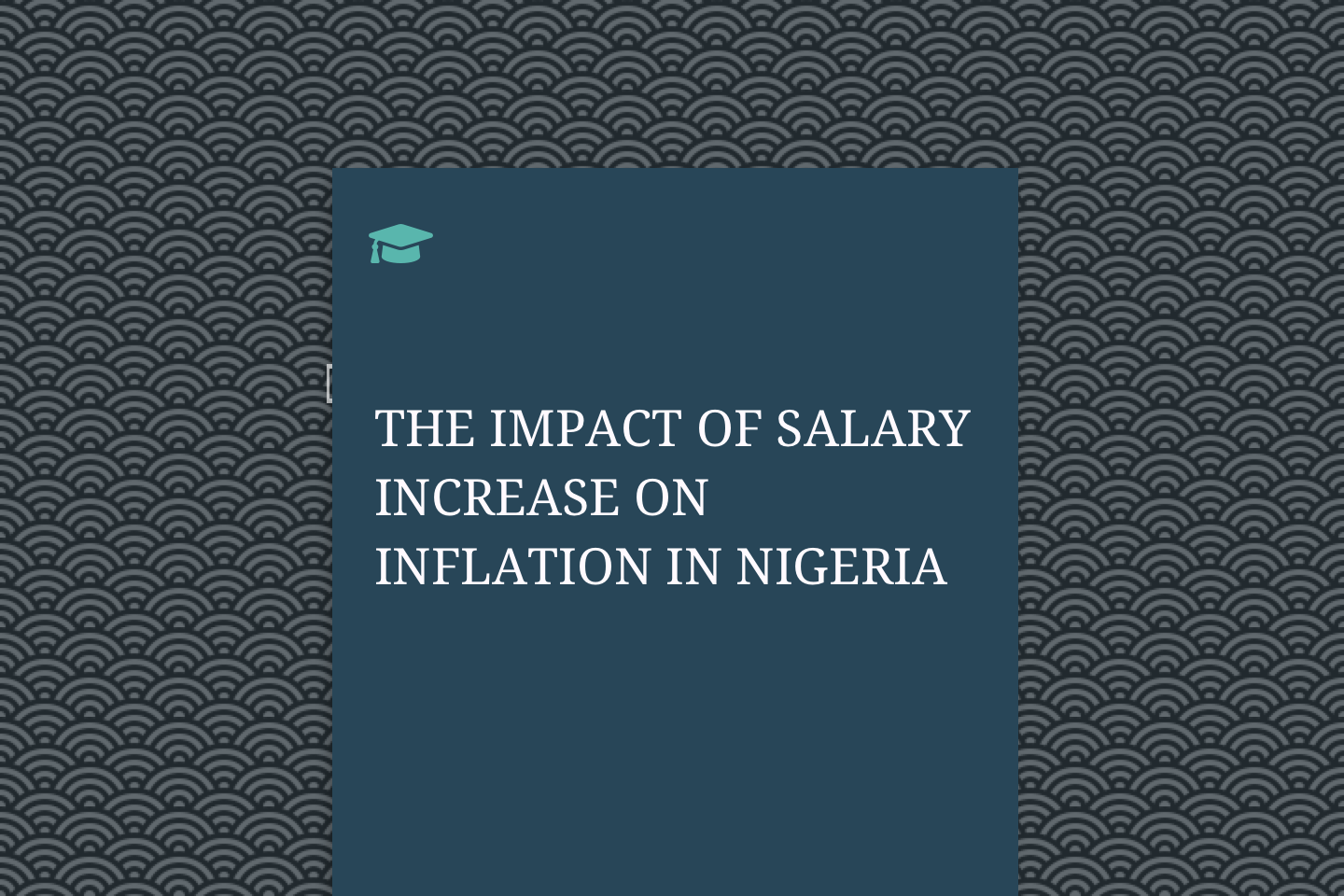 No economy can escape the evil done is by inflation and unemployment because when measures to control one are being employed the other is being upset. However, we are dealing with inflation alone. In fact, this study investigates the impact of salary increase on inflation in Nigeria. In a bid to achieve the objective of the study, ordinary least square regression method was adopted using secondary data from 1984 to 2009 the results indicate that there is a negative relationship between the dependent variable (inflation) and the independent variable (salary). The result of study showed that salary increase has a negative relationship with inflation and salary does not have a significant impact on inflation in Nigeria, therefore inflation is not adequately explained by changes in salary. Hence, inflation should be track led adopting other fiscal and monetary measures and not necessarily income policies

1.1 BACKGROUND OF THE STUDY.

The Nigerian economy is a middle income economy emerging market with well developed financial, legal, communication, transported entertainment sectors. It is ranked 31st in the world in terms of gross domestic product (GDP)as 2009 and its emergent through currently under performing manufacturing sectors is the second largest on the continent, for the west African region scholars have characterized the Nigerian economy to be associated with a high cost of living putting it in words,(EKAN 1998)states that Nigerian economy is characterized by high cost of living which is resultant effect of the persistent increase in the general price level in the economy. In an effect to solve the problem of low standard of living, government expenditure has been on the continual increased which is partially caused by trade unions agitations and partly by continual increase in prices of goods and services in the product and factors markets in the product.
Since the independence the country’s recurrent expenditure has been on the increase in 1970 total recurrent expenditure stood at two thousand seven hundred and thirty four naira, ninety kobo in 1980 when the economy was on a persistent growth our recurrent expenditure stood at four thousand eight hundred and twenty kobo in 1986 when SAP (structural adjustment programme) was introduced it.

Stood at seven thousand, six hundred and ninety nine kobo. The increase in the country’s recurrent expenditure was necessitated by the need to create employment and increase money supply to match the output level. (NBS, 2009).
However, the purchasing power of the average Nigerian has been reducing because of the increase in price level in the economy. In an attempt to solve this problem, various perspective and annual plans have been formulated and implemented. Examples are the vision 2020, vision 2010, and Yaradua’s 7 points agenda, Millennium goals and 2013 budget by Goodluck Jonathan.

For Nigeria, as the general price level is on the increase so is the recurrent expenditure which has created the inflationary gap in the economy (WAHAB 2004).This research is investigating the impact of salary increase on inflation in Nigeria.

The problems that occur when salaries are increased are raising labour costs which in turn lead to cost push inflation. As workers demand wage increases, companies usually choose to pass on those costs to their customers through price increases, thus causing inflation that is where prices are forced upwards because when people have much money with them. It increases aggregate demand.

Also wages increase leads to retrenchment of workers thus causing inflation has tremendous impact on the output and employment decision by firms because inflation distorts the price mechanism by making it difficult to distinguish changes in the general prices level, it creates uncertainty making the investors less willing to take risks and invest especially in long term project, inflation push up real interest rates as lender demand a bigger risk premium on their money.
This work therefore aims at investigating the impact of salary increase on inflation in the Nigeria economy. For the purpose of this study the salary increase as represented with federal government recurrent expenditure excluding social service, economic service, transfers. If government wants to solve the problems of inflation it will end up creating unemployment .As a result of this, various economics theorists have theorized about the relationship between salary increase and inflation thus giving rise to the theories, causes and effects of inflation.

1.3 OBJECTIVES OF THE STUDY.

This research is solely aimed at finding out the impact of salary increases on inflation in Nigeria. The specific objectives of the study are as follows;

1.5 SIGNIFCANCE OF THE STUDY.

This study will be useful to policy makers in the economy to aid them formulate sound economic policy that will keep inflation at the barest minimum in the economy. The study is also important to other researchers in this field as a reference materials to aid them in their own research that are yet to be conducted.

1.6 SCOPE AND LIMITATION OF THE WORK

The Nigerian economy with a labour force of 47.33million persons who produced a national income of $353.2billion (CBN 2009) is dominated by the public sector because 65% of the labour force are employed in the public sector, 20% in commercial activities, 10% in agricultural activities and 5% in the services (NBS 2009). The above data imply that the study will cover government employees alone because they dominate the labor force in the country. Data collected from a secondary source ranged between 1984 to 2009. The year 1986 was chosen because that era was characterized by the SAP (Structural Adjustment Program me).
However, this study has its limitations, which include;

1. There are very limited materials for the research. This is because few authors have thought on this issue.
2. The unfriendly attitude of staff of various ministries and companies where I went to collect materials because of secrecy and other reason like money.
3. Difficulties in collecting data relating to my project. Due to not enough information was available. After all the difficulties I still got few materials that will help enrich my project.