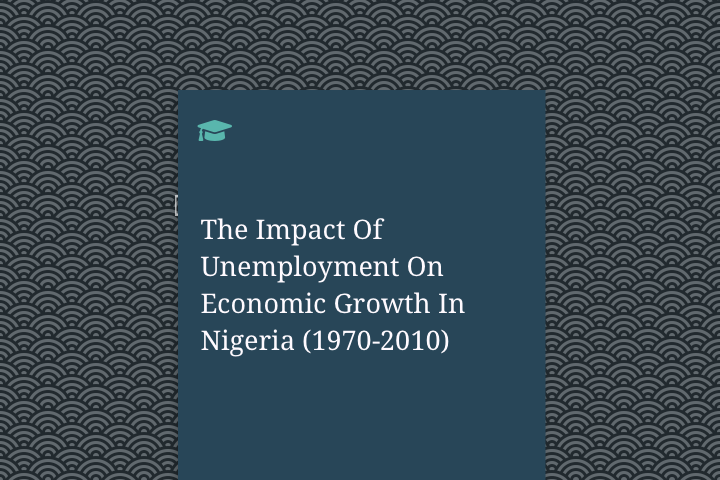 Unemployment is generally agreed to be symptom of macroeconomic illness which could be “voluntary” or in “Voluntary”. When is said voluntary I mean a condition where somebody chooses not to work because they have a means of support other than employment example is the idle rich man. On the other hand involuntary unemployment exists when persons are willing to work at the prevailing rate of pay but unable to find work. (Anyanwu 1995). Balogun, ed et el (2003) also defined unemployed as the percentage of the percentage of the labour force that is without job, but is able and willing to work. In Nigeria however the ability and willingness to work is not sufficient. It is necessary for the unemployment to be registered with an employment bureau in order to be recognized as unemployed. Yet, from an economic viewpoint, the unregistered unemployed are part of the labour force and are, therefore, technically unemployed. In Nigeria, unemployment data are obtained through labour force sample surveys which ask if the respondent has worked in the week preceding the survey. However, the international labour organization (ILO), realizing the shortcomings of the labour survey as it affects developing economies, such as Nigeria, with a large informal sector, has encouraged a review of the methodology to incorporate further disaggregation of respondent responses to bring out the true rate of unemployment. In order to establish the type of unemployment existing in an economy, economists have classified unemployment as „frictional‟, „seasonal‟ „structural‟ or cyclical‟.

From the data, the 1985 figure shows the percentage of the national urban and rural unemployment as follows: national 6.10%, urban 9.8%m rural 5.2%and in year figure is as follows: national 3% urban 3.8% rural 2.7 %( CBN 2004). The rising rate of the population of the country which is faster than the job opportunities, a situation in which birth rate is rising, death rate falling and the population growth rate is between 2.5% and 3% unemployment is bound to exist. There had been also a total neglect of the agricultural sectors and consequent mass exodus of able bodied youths from the rural to urban areas in search of the none existing while cooler jobs. This further reduces employment in agriculture and puts pressure on existing urban jobs (Anyanwu 1995)

Unemployment has reached a very alarming proportion in Nigeria, with a greater number of the unemployment being primary and secondary school learners and university graduates. This situation has recently been compounded by the increasing unemployment of professionals such as bankers, engineers and doctors. The toll is within the productive segment of the Nigeria population (Vision 2010). The extent of unemployment in Nigeria in is not justified by the available financial statistics phenomenon. This is because of the nature of unemployment in the country where many job seekers do not see the need for registration as unemployed due to expression of futility in such exercise. This harnesses the sharp disparity between the official statistics on the phenomenon and the reality on ground (Bello 2003). Disguised unemployment otherwise known as concealed 7 unemployment is a situation in which more people are available for work than is shown in the unemployment statistics (Bannock et el 1998) The problem of disguised unemployment is quite acute in Nigeria.

This explains why official unemployment statistics sharply differs from the true state of employed or unofficial statistic available. The recorded figure unemployment significantly understates the number of people who are actually willing to work at the existing set of wage rate. Consequently, the unemployment figure in Nigeria is obtained through labour force sample survey, by asking if the person has worked in the past week preceding the survey. Obviously, because even a graduate whohawks around respond yes to the question, the unemployment rate will always be very low.

Unemployment is a situation of a labour not having enough paid work or not doing work that makes full use of his skills and ability. It can be measured by the numbers of hours worked per week. Generally in Nigeria, the official period of working time per week is forty hours which manyworkers fall short of due to non – availability of work. In some instance available work is rationed especially among the low skilled and casual labours in the formal sector tends to be worse (Bello 2003) therefore the major problem we have in Nigeria is the distinguished unemployment form. The official figures of the rate of unemployment form. December1998, a total of 66.3% of male and 62.0% of female unemployment were recorded at the urban centres while rural centreshad an estimate of 47.1% and 45%male and female job seekers respectively. As at December 1999, school levers 9 unemployment rate had raised to 67.0% for males and 68.8% for females in the urban centres while the rural centres was as high as 59.1 and 55.7%.

For male and female respectively (Bello 2003).For polytechnic and university graduates, the figures shows relatively low unemployment rate as compared to the school leavers experience. For instance, during the period under investigation a peak of 14.0% rate of unemployment was recorded for polytechnic female graduate in 1998 which the male graduate records had its peak in 1999 with 15.0% point in urban areas (Bello 2003). The graduate unemployment rate in the urban centres had 8.5 per cent record high in September 1999 for males and 4.5%in June 1999for female during the periods (Bello 2003). Many people are frustrated by lack of unemployment‟s opportunities they include these without work and those who have jobs but want to work longer hours or more intensively. A 10 considerable size of utilized and underutilized labour abounds in Nigeria and which ought to be brought into the circle. These shows that Nigeria‟s employment problem has become chronic and should be a matter of utmost national concern.

From the above discussions the research question is: Has unemployment had any impact on Nigeria economy?

The objectives that will guide this study are as follows;

H1: Unemployment has no significant impact on the economic growth in Nigeria.

1.6 IMPORTANCE OF THE STUDY

The limitation of this research were much and varying. First was the difficulty in getting access to some relevant research documents. There were several cases of limited copies of materials. The second constraint to this research was finance and time. The time allowed for the completion of this work was short, coupled with the fact that other academic work were in progress.