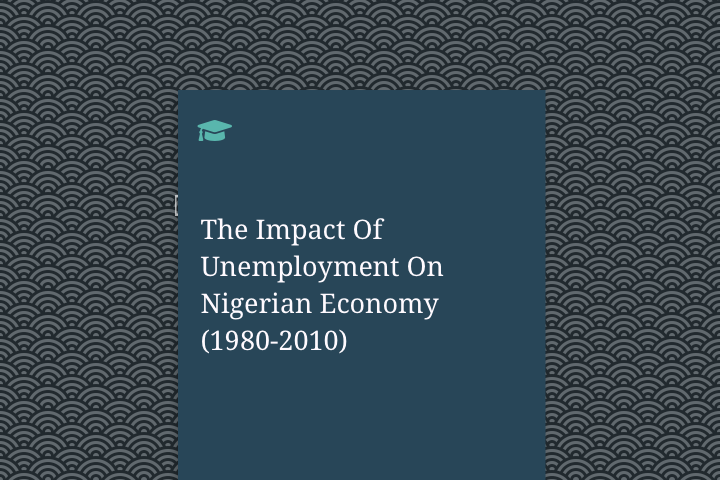 The term unemployment can be defined as a situation whereby those who are willing and able to work do not find job. This is mostly seen among graduates of various institutions of learning especially in underdeveloped nation like Nigeria. The study was designed to investigate the impact on unemployment on Nigeria economy (1980-2010). The research focuses on determining the causes and effects of unemployment and how the problem of unemployment in Nigeria will be reduced to a minimal level or even eradicated. It focuses on this objective: to determine the relationship between unemployment and economic growth in Nigeria (GDP).The method of analysis used in testing the hypothesis is the t-test, f-test e.t.c.Data for the study was obtained from the Central Bank of Nigeria statistical bulletin. The major findings were that unemployment has a negative effect on the gross domestic product (GDP) of the Nigerian economy. Some suggestions and policy recommendations were made based on the findings

Unemployment is generally seen as a macro-economic problem as well as socio-economic problem .Unemployment arises as a result of insufficient and non-availability of jobs to correspond with the growing population, even those who are employed sometimes live with the fear of being unemployed due to job insecurity and retrenchment of workers. There is employment of factors of production if they are engaged in production. The term unemployment could be used in relation to any of the factors of production which is idle and not being utilized properly for production. However, with reference to labour, there is unemployment if it is not possible to find jobs for all those who are eligible and able to work. Labour is said to be underemployed if it is working below capacity or not fully utilized in production (R.A.I Anyawuocha 1993)
Unemployment can either be voluntary or involuntary. Voluntary in the sense that one chooses not to work because he or she has means of support other than employment. Example is an idle rich man. On the other hand, involuntary unemployment exist when persons who are eligible and willing to work at the prevailing rate of pay are unable to find work. (Anyanwa 1995).

According to the central bank of Nigeria (2004), unemployment rose to 30% during 2004 statistics on unemployment rate.
Unemployment has been seen as a world-wide economic problem and has been categorizedas one of the serious impediments to social progress .Apart from representing a huge waste of a country‟s manpower resources, it generates welfare loss in terms of lower output thereby leading to lower income and well being of the people (Akinboyo, 1987, and Raheem 1993). Unemployment is a very serious issue in Africa (Vandemortele, 1991, and Rama 1998), and particularly in Nigeria (Oladeyi, 1994 and Umo, 1996). The need to avert the negative effect of unemployment has made the tackling of unemployment problems to feature very prominently in the development objectives of many developing countries.
In the study of unemployment in Africa Okonkwo (2005) identified three (3) cause of unemployment, the educational system, the choice of technology which can either be labour intensive or capital intensive and inadequate attention to agriculture. The use of machines to replace work done by labour and computerization has contributed to these social problems in the sense that what for example forty (40) men can do manually a machine will only need like five (5) men. Therefore, the remaining thirty five (35) are unemployed. More so, lack of enough education and skill to have access to credit and capital.
One particular feature of unemployment in Nigeria is that it was more endemic in the early 1980‟s than any other period. According to Udabah (1999:62), the major factor contributing to low standard of living in underdeveloped countries in their relative inadequate or inefficient utilization of labour in comparism with advanced nations. Unemployment rate is measured by the proportion of the labour force that is unemployed divided by the total number of the labour force. The total labour force was projected at 61,249,485 in 2007 indicating an increase of 3.9%. Total employment in 2007 stood at 52,326,923 compared with 50,886,836 in 2006. This represents an annual increase of 2.8%. The labour force consists of the number of people ageing  and over who are employed (that is, those who currently have jobs) and unemployed (those who do not have jobs but who are actively looking for work).Individuals who do not fall into either of these group such as retired people and discouraged workers are not included in the calculation of the labour force.
The international labour force organization (ILO) defines unemployment as the proportion of the labour force which was available for but did not work for at least one hour in the week preceding the survey period. National Bureau of statistics (N.B.S). Nigeria defines unemployment as the proportion of the labour force that is available for work but did not work for at least thirty nine (39) hours in the week preceding survey period.
Unemployment according to lipsey (1963:456) brings about economic waste and cause human suffering. According to Fadayomi, 1992, Osinubi, 2006, unemployment is as a result of the inability to develop and utilize the nations manpower resources effectively especially in the rural sector.
The socio-economic effect of unemployment includes: fall in national output, increase in rural-urban migration, waste of human resources, high rate of dependency ratio, poverty, depression, frustration, all sorts of immoral acts and criminal behaviour e.g prostitution, armed robbery e.t.c. The social effect of unemployment brings to light the need to proffer possible solution to salvage our nation Nigeria

Working with the data from the national bureau of statistics, it indicates that the national unemployment rate in the first quarter of 2007 was 14.6%, compared with 13.7% in 2006. The urban and rural rates were 14.4% and 15.0% respectively compared with 10.2% and 14.8% in 2006. Further analysis showed that the distribution of unemployment ranged from 14.1%vfor the age group of 25-44 to 23.5% for the age group of 65-70. Desegregation according to geopolitical zones showed a very uneven distribution with the south-south zone having the highest unemployment rate of 29.5% and southwest at the rear with 8.5%. Between these extremes were the north-east with 18.5%, south-east 18.1%, north central 15.8% and north-west 14.2%.
It is based on the increasing problem posed by unemployment on individuals and the nation at large that government has been embarking on various policies to control and reduce unemployment but yet has not yielded any positive result, rather it seems to be escalating. Drastic measures must be taken by government to curtail this problem of unemployment. The statement of problem is based on the economic, social and political effects of unemployment

1. To determine the relationship between unemployment and economic growth in Nigeria

The null research hypothesis for this work is;
1. Unemployment does not affect economic growth in Nigeria

The significance of this study is to make research on the effect of unemployment for most qualified graduates of various institutes of learning and also qualified skilled labour. The result of this study will provide useful information needed by government to fight unemployment and help create employment opportunities in Nigeria

The scope of this study is centred on the effect of unemployment on the Nigerian economy. The research work is also centred on thirty years duration from 1980-2010. The regression analysis was also based on the use of timeseries data extracted from the central bank of Nigeria statistical bulletin. The method of analysis used in testing the hypothesis is the t-test, f-test e.t.c.
Possible suggestion and recommended were also made.
It is worthy to note that every research work posses alot of problems and limitations. However, the difficulties encountered includes, inadequate and nonavailability of relevant data owing to the fact that unemployment in most underdeveloped countries e.g Nigeria is not evenly distributed and thus varies from one place to another, financial constraint, high cost of transportation and the
difficulty in locating the various research centres