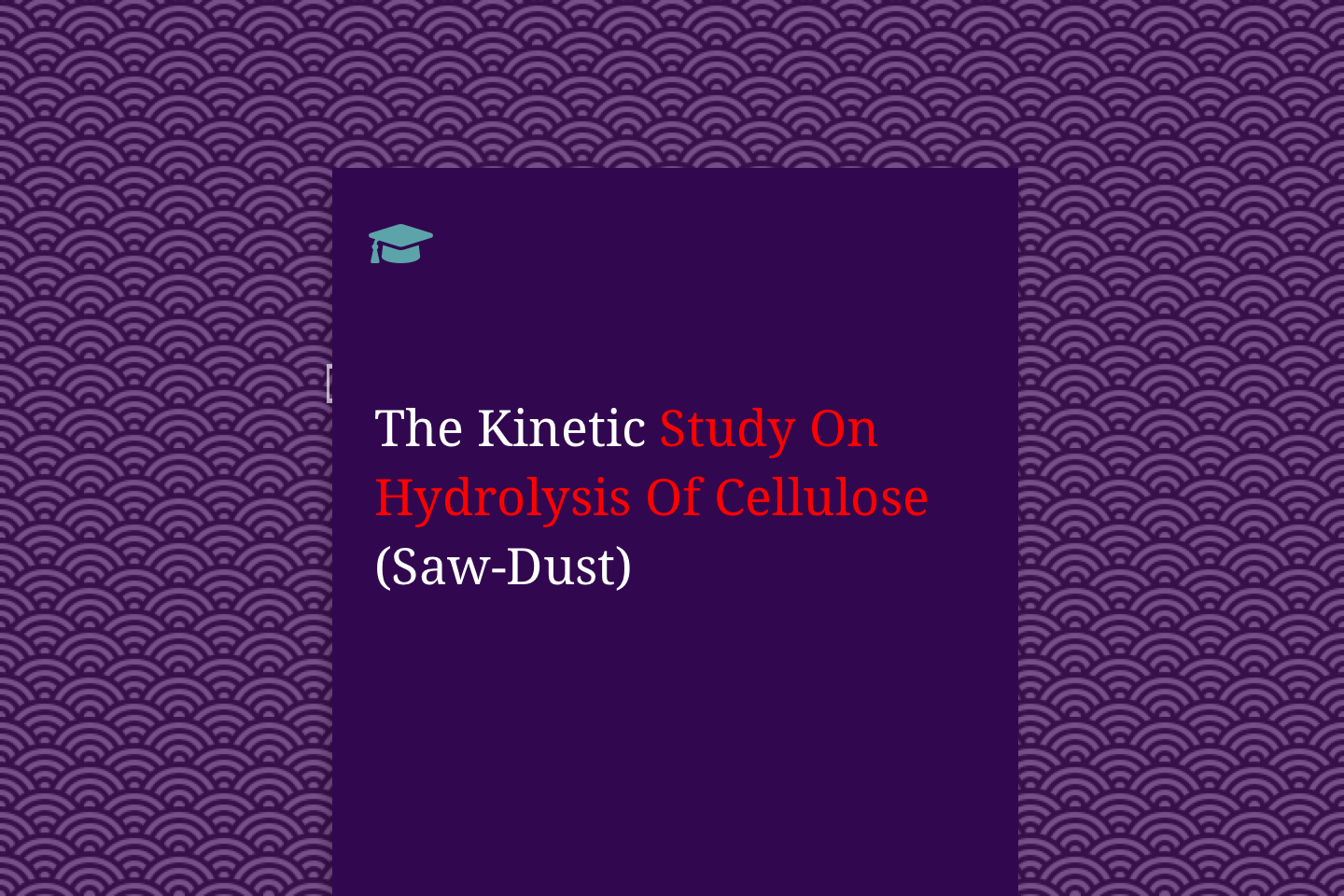 This research project studied on the kinetics of hydrolysis of cellulose to glucose.

The steps employed to achieve this project involved extraction of cellulose from sawdust and subsequently, hydrolysis of starch to simple sugar. This was followed by glucose analysis. Different experiments were conducted during acid hydrolysis to study the various acids on the hydrolysis of cellulose to glucose. The saw-dust was extracted from the wood by grinding using saw. The process used in the hydrolysis was acid hydrolysis in which two major inorganic acids (Hydrochloric and Sulfuric) were used at constant temperature of 80oC. During this experiment, it was observed that Hydrochloric acid hydrolyzed most, followed by Sulphuric acid.

Finally, sugar analysis was carried out to determine the acid with the highest yield of glucose and the best acid for the hydrolysis. It was noticed that the yield of glucose was relatively high from HCl at 1.280% concentration, followed by H2SO4 at 0.940%. It was also seen from the graph that the absorbance yield increases as the glucose concentrations increases in terms of HCl. Therefore, the best acid for acid for acid hydrolysis is HCl.

Cellulose is a naturally occurring polymeric material containing thousands of glucoselike rings each of which contain three alcoholic OH groups. Its general formula is represented as (C6H10O5 )n. The OH-groups present in cellulose can be esterified or etherified, the most important cellulose derivatives are the esters.

Cellulose is the name given to a long chain of atoms consisting of carbon, hydrogen and oxygen arranged in a particular manner. Cellulose is found in nature in almost all forms of plant life, and especially in cotton and wood. A cellulose molecule is made up of large number of glucose units linked together by oxygen atom. Each glucose unit contains three(3) Hydroxyl groups, the hydroxyl groups present at carbon-6 is primary, while two other hydroxyl are secondary. Cellulose is the most abundant organic chemical on Earth more than 50% of the carbon in plants occurs in the cellulose of stems and leaves. Wood is largely cellulose, and cotton is more than 90% cellulose. It is a major constituent of plant cell walls that provides strength and rigidity and presents the swelling of the cell and rupture of the plasma membrane that might result when osmotic conditions favor water entry into the cell. Cellulose is a fibrous, tough, water-insoluble substances, it can be seen in cell walls of plants, particularly in stalks, stems, trunks and all woody portions of the plant. Cellulose is polymorphic, i.e there are a number of different crystalline forms that reflect the history of the molecule. It is almost impossible to describe cellulose chemistry and biochemistry without referring to those different forms.

Cellulases are gotten from cellulose, cellulose is also found in protozoa in the gut of insects such as termites. Very strong acids can also degrade cellulose, the human digestive system has little effect on cellulose. The word cellulose means β-1,4-D-glucan, regardless of source because of the importance of cellulose and difficulty in unraveling its secrets regarding structure, biosynthesis, chemistry, and other aspects, several societies are dedicated to cellulose, lignin, and related molecules.

Cellulose for industrial conversion comes from wood and scores of minor sources such as kenaf paper and rayon are now made mostly from wood pulp. cotton rings were historically important for paper making, and cotton linters (short fibres are used to spin yams) are now used in high quality writing and currency papers.

Cellulose forms very tightly packed crystallites, these crystals are sometimes so tight that neither water nor enzymes can penetrate them; cellulose consists of two cellulose molecules;

Some cellulose comes from the hairs (trichomes) on seeds, example: cotton, kapo and milk weed. A commercial bacterial cellulose product (cellulon) was introduced by Weyerhaeuser(22) for use in foods, the product is called primacel and is available from Nutrasweet kelco. Recently, cellulose from sugar belt pulp and from citrus pulp hasaroused interest for use as a fat substitute.

Hydrolysis of cellulose is the process of breaking the glucosidic bonds that holds the glucose basic units together to form a large cellulose molecule, it is a term used to describe the overall process where cellulose is converted into various sweeteners. ydrolysis is a chemical reaction during which one or more water molecules are split into hydrogen and hydroxide ions, which may go to participate in further reactions.

1.5 STATEMENT OF THE PROBLEM

The clamour for the diversification of Nigerian economy through low quality products has motivated researchers to explore the numerous domestic, industrial and economic importance of one Nigeria`s major product (cellulose) which forms the bedrock of this project. Sugar is a commodity of high demand for both domestic and industrial applications on daily basis in homes, small and medium scale industries e.t.c. this is why Nigeria government spends huge sums of money on importation of sugar and sugar products to meet the demand of citizens. Among the many processes of sugar production, is acid hydrolysis of (cellulose) has proved to be a process which encourages the production of high quality with minimum skill and materials. This work is therefore an effort to encourage industrialists, researchers, and students to carry out more intensive studies on production of sugar from cellulose for production of sugar and enhanced economic resources for the nation.

1.6 RELEVANCE OF THE STUDY

Nigeria is the largest producer of cellulose for which paper wood is made. A large percentage of produced cellulose is consumed as paper, textiles, newspaper and
containers in form of writing, reading e.t.c. The method of acid hydrolysis of cellulose:

The research project covers the processes, operations and pathways involved in the Acid hydrolysis of cellulose to produce (glucose) sugar. The research study aims at:

The Production Of Yam Flour