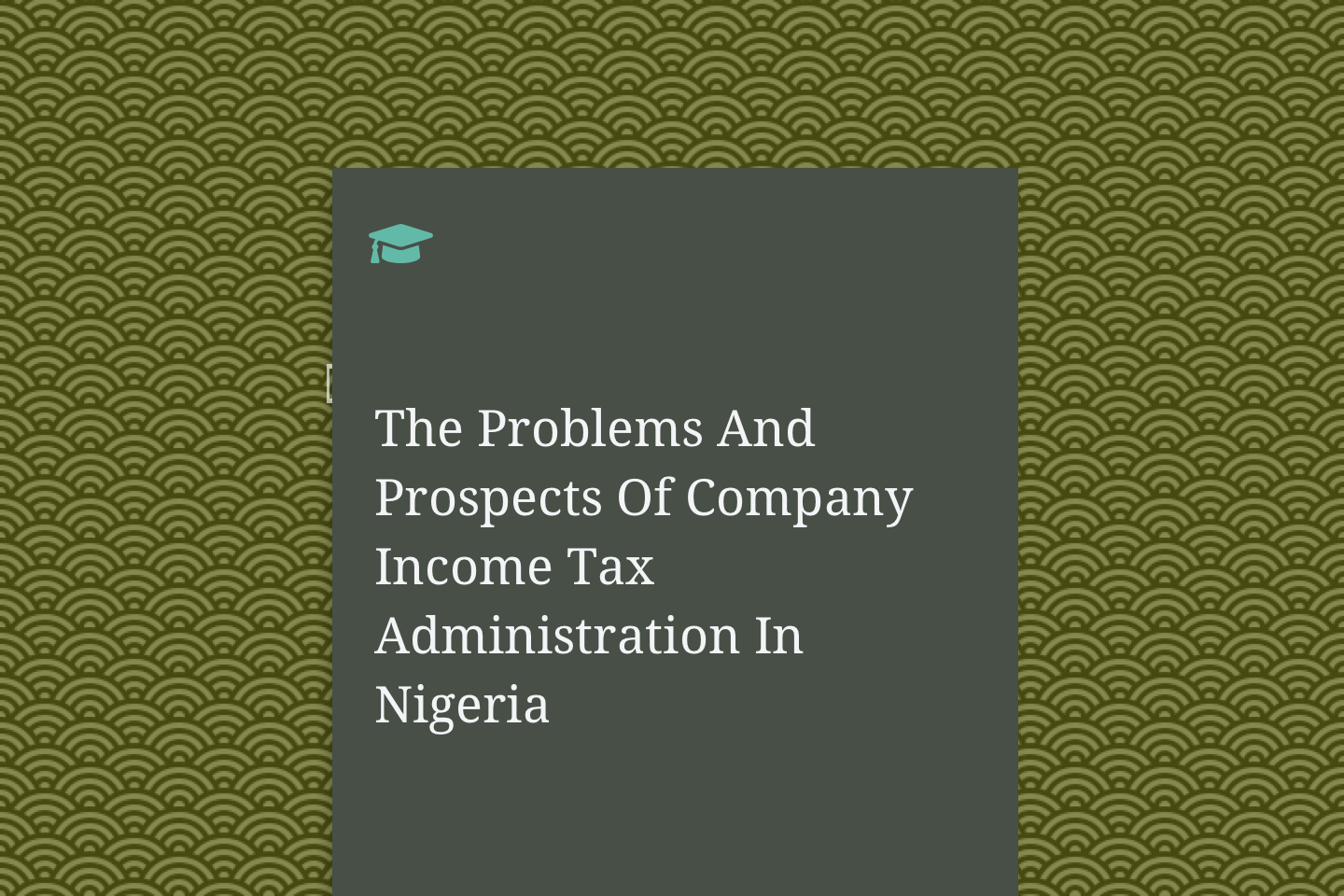 The Problems And Prospects Of Company Income Tax Administration In Nigeria

For the tax Administration in Nigeria to be effective the aspect of the companies been taxed should be considered adequately and more accurately so that the company would provide reliable financial performance information for assessment. In which the federal government derives its income.

Due to the ever changing tax administration policies in the country and modifications in the aspect of taxation in Nigeria some companies want to stay afloat and employ all kind of strategies that benefits them. Some of them evade tax and some avoid tax.

When tax in Nigeria is paid by the various companies operating in the state the revenue collected are used to provide utility services and providing additional government services such as in education and transport which are of great importance to the growth of the economy of the state and to the country.

Tax administration in the country is a very important aspect that assist in the provision of revenue to the economy of which the avoidance of tax payment by the companies in the country in general and in Abia state in particular will result to a serious damage to the revenue which should have been generated and used for the provision of infrastructure.

When a company is been taxed by the federal board of inland revenue (FBIR) the company is meant to give an accurate information about their income but some companies go to the extent of forgery in provision of their documents which gives an incorrect information to the board, thereby causing reduction in their tax assessment.

Based on the above observation or trend of this action over time this study set out to examine the problems and prospects of the company income tax administration in Nigeria and in Abia state to be precise.

The tax administration (collection and assessment of tax from companies is a difficult task. The assessment and collection of companies’ income tax as at when due has been a problem Associated with company income tax administration in Nigeria. These problem through observation has been influenced by the following understated factors. raudulent under-declaration of income and making of incorrect returns by companies coupled with collusion of officials of FBIR staff with company under assessment. The problem of tax evasion is real and so much in Nigerian economy where individuals and companies use all means to evade tax. The fact that the federal board of inland revenue (FBIR) is unable to bring their entities within the letter of the law is of a serious concern mostly in the area of highly government spending  borrowing and when there is pressing need to improve revenue generations from all sources including taxation.

The problems of revenue losses to government due to fraudulent and illegal deals from her citizens and organisations within the country prompt the need for this research work.

For the purpose of this study the following question were raised for an indept study of this research work;

Ho:- Sharp practices in tax administration between the staff of FBIR and assessed company does not contributes to tax evasion

H1:- Sharp practices in tax administration between the staff of FBIR and assessed company contributes to tax evasion

Ho:- There is variation between the financial statement used for AGM and that used for tax administration of assessed company.

H1:- There is no variation between the financial statement used for AGM and that used for tax administration of assessed company

H0:- The loss of confidence in government does not contribute to tax evasion

H1:- The loss of confidence in government contributes to tax evasion.

The result of this study will throw more light on the problems of companies’ income tax administration in Abia state Nigeria. The special emphasis on the federal Board of Inland revenue (FBIR) will highlight peculiar problems and difficulties in administering the companies’ income tax would increase the revenue generation of the government.

This study shows the problems and prospect of Nigerian company tax with Abia State Federal Board of Inland Revenue as the case study. The period covered by this research enabled the research to be reliable.

LIMITATION OF THE STUDY

This research study is limited to detailed study of (FBIR) and the relevant Act setting it up with particular emphasis on the overall administration of the act in Abia state. Gathering of relevant data for this study was a hectic task it is also expected that there will be limited mostly in areas of questionnaire distribution answering the question sincerely and returning them (especially the tax officials) due to fear of the unknown.

According to Longman Dictionary of contemporary English Tax evasion are the illegal ways of paying less tax.