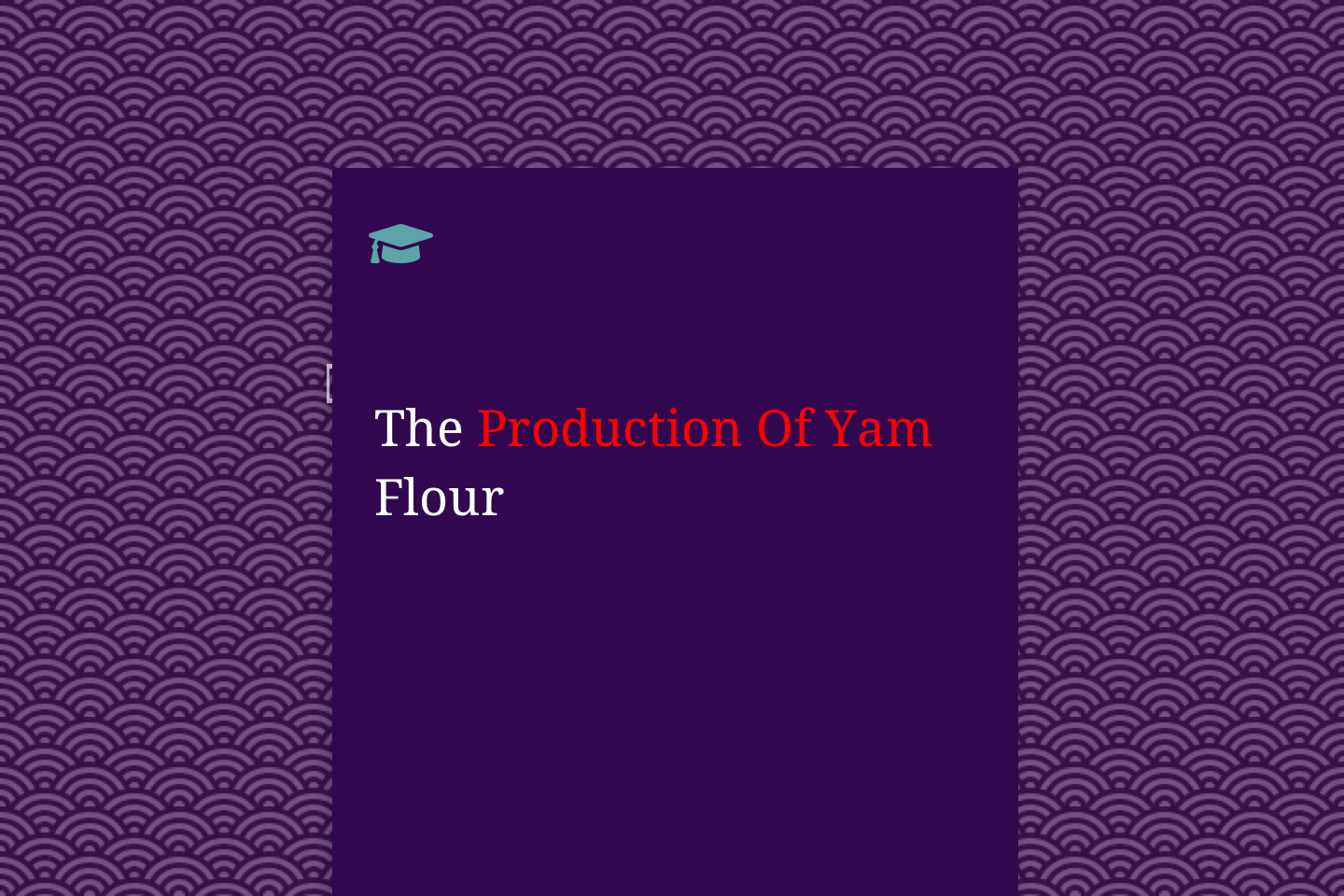 The Production Of Yam Flour

The project dealt on the production of yam flour from yam chips. The yams were peeled and washed, 100grams samples coded sample A to G were subjected to two different drying conditions. Some were dried using the sun drying method while the others were dried through oven drying method kept at constant temperature of 500C, sodium bi-carbonate was added to some of the samples, all these were done to obtain a flour with the best colour and texture quality. From the results obtained, it was observed that sample B (yam boiled with sodium bicarbonate and dried with oven) gave the best result and quality when tested with hot water, this was as a result of the drying condition used, the constant temperature maintained and the presence of the sodium bi-carbonate used which helped in achieving the result. Generally, the samples dried through the oven drying method at 500C gave better colour and result of the yam flour when tested with hot water more than other samples dried by sun drying and this was due to the stability in temperature in the oven drying method used.

1.1 Background Of The Study

Yam (dioscorea spp.) is a multi-species crop that originated principally from Africa and Asia before spreading to other parts of the world (Hahn et al.,1987). It belongs to the family of dioscoreae within the genus dioscorea and serves as a staple crop in west Africa.(Asiedu et al., 1992). There are many cultivars of yam, though only six are important as staple foods in the tropics. the economically important species grown are Dioscorea rotundata(white yam),D.alata (yellow yam),D.bulbifera (aerial yam), D.esculenta (Chinese yam) and D.dumenterum (trifoliate yam). Yam tubers which is the most important part of the plants can be stored longer than other root and tuber crops. This ensures food security even in times of general scarcity. Yam is the third most important tropical root and tuber crop after cassava and sweet potato (fu et al., 2005). West Africa is the leading producer of yam and grows over 90% of the worldwide production (40 tonnes fresh tuber/year) followed by the west Indians where Jamaica is the leading producer (FAOSTAT,2004). Nigeria is the world’s largest producer of yams followed by Ghana, ivorycoast and togo (FAO,2003). Both fresh tubers and yam flour are now exported from Ghana and Nigeria to developed countries such as united kingdom and united states of America. These are mostly patronized by emigrants from growing regions according to the Nigerian export promotion council (NEPC) Nigeria realized N56 billion in 2007. Sustainable production and utilization of yam are important  steps in enhancing food security and alleviatind poverty particularly in west Africa where it is estimated to provide more than 200 dietary calories each day for over 60 million people (Nweke et al.,1991., FAO 2002).
Yam is consumed in different forms,mainly boiled,fried or baked.tubers are often dried and milled into flour for various product,boiled yams,poundes yams and amala are the forms of yam mostly consumed in west Africa especially Nigeria and benin (Akissoe et al.,2001). Yam production faces many constraints among which are production cost (mainly planting material and labour cost),post-harvset losses(low yields). Water yam (Dioscorea alata) posses a higher multiplication ratio and tuber yields as well as better storability than the preferred indigenous species such as D.rotundata, D.alata is popular and prevalent abakaliki agro ecological zone of ebonyi state Nigeria where it is called ‘Mbala or Noula’ (igbo names) (Udensi et al.,2008) even though D.alata is also eaten boiled,it is less preferred to D.rotundata varieties. D.alata can also be processed into flour and reconstituted into fufu though generally D.alata contains less sugar and has an extended shelf-life (Raemackers,2001) which ensures availability in times of scarcity.it is also known for its high nutritional content,with crude protein content of 7.4%,starch content of 75-84% and vitamin C content of ranging from 13.0- 24.7mg/100g (Osagie.1992).breeders are therefore kein to improve the food
quality of the species as it has good agronomic characteristics.

The principal problem in yam production that has been identified is the high cost of seed yam, high labour requirement, diseases, pest as well as high postharvest losses(Orkwor 1998).another constraint to yam production is the limited processing technology. About 30% of harvested yam tubers are lost to waste. The bulkiness of fresh transport and low margins for both farmers and traders are thus a matter of serious concern in the urban market (Cooke et al.,1988). During the processing of yam through sun-drying method,the problem encountered is the loss due to potential contamination of the product variability in drying time, rain damage and so on. Ohweever, D.alata fresh texture is usually not firm as the D.rotundata (white yam) and less suitable than other species for the preparation of the most popular food product from yam in the west Africa region(Wireko-manu et al.,2011).
Finally, during the production of flour from yam, in the western part of Nigeria (the yorubas), the yam flour produced which is called “AMALA” is normally brownish in colour and dark in nature, hence does not have a good quality and colour. Technologies therefore have been discovered to bring about the production of yam flour that has a high quality and a good colour and texture.

The growing need for the variety of food in Nigeria has become a primary concern for the urban and rural households in Nigeria. In recent times, the concern has raised much researcher’s interest to do related studies. As reported in many different studies around the world, food security is a common problem.

The present study aims at carryout an experiment on fresh yams, optimize the drying parameters and investigate the effect of drying conditions on the quality of the yam. To result to this, the present study which will address particular issues food drying could stimulate producers, farmers, agriculturists, educational practitioners on the phenomenon of drying to enhance the quality of yams to solve past harvest losses.

2.1.1 ORIGIN AND CULTIVATION OF YAM

Yam (dioscorea spp) in an annual or perennial tuber bearing and climbing plantbelonging to the family of DIOSCOREACEAE. Some species of yam originated from Africa before spreading to other parts of the world while some originated from  asia and have spread to Africa (Hahn et al 1987). Today, yams are growm widely throughout the tropics and they have a large biological diversity including more than 600 species worldwide (Burkill.,1960. Coursey.1967) but only six are widely cultivated in west and central Africa. These cultivated species are D.esculenta,
D.alata, D.bulbifera, D.dumetorum, D.cagenensis and D.rotundata. wild types of yams also exist and may be used as food after undergoing processing during the hunger seasons (Telteh and Saakwa, 1994). A few yam species are also grown and used as health food and medicinal purposes (Albrecht and Mc carthy,2006). In the west Africa yam zone which Is the principal producer on global basis, D.rotundata, D.cagenensis and D.alata are commonly grown.

Water yam (dioscorea alata) is also referred to as Asian greater yam and ten month yam (Martin, 1976). It is more important as food in west Africa and the caribbean than in asia and the America where it originated and also has been competing with the most important native species, D.roundata. it was introduced to Africa some hundred years ago from Malaysia through agriculturists and
portugnese and Spanish seafarears,(Martin 1976) it is next to D.rotundata in terms of volume of production of extent of utilization. D.alata species is the highest yielding among the yam species and can store relatively longer that the other species (5-6 months) after harvest,D.alata is also known for its nutritional content with crude protein content of 7.4%, starch content of 75-84% and vitamin C content of ranging from 13.0 to 14.7mg/100g (Osagie,1992). D.alata tubers have variable shapes, the majority being cylindrical,its tubers vary in numbers from one to five. The flesh of the tubers ranges in colour from white to purplish (FAO, 1994). The texture of its flesh is usually not firm as that of white yam and less suitable than other species for the preparation of most popular food product from yam (fufu and pounded yam especially in the west Africa region. However, it is reported that D.alata is a major staple food in cote‘d’ ivoire where it constitute about 65% of the yam owned in the country. (Orkwor, 1998).

Yam is a plant of the tropical climate and does not tolerate frosty condition (Coursey, 1967) it is grown and cultivated for its energy-rich tubers. And it is adaptable to fairly fertile soils and is suitable for inter-cropping with grains legumes such as cowpea, soya bean and variety of leafy vegetable. A well drained rich loamy soil however is the most favoured i.e for yam cultivation; yam requires a warm humid climate. However the crop possesses considerable drought. Resistance (IITA, 2009). Light intensity in known to affect growth and tuber formation. Short days between 10-11 hours promote tuber formation, while days longer than 12hours promote vine growth. This is usually the reason why yam vines are staked to ensure maximum interception of light by the leaves to promote yield (Coursey, 1982,Okezie,1987).
Traditionally, yams propagated vegetatively from whole tubers (seed yam) large tubers pieces (sets) or from minisets. The growth of yam starts with a sprout from the post dormant tubers (Passam.,1977,Onwueme,1978). Yams exibit a sigmoiodal growth pattern common to most annual plants. A period of slow growth during establishment is followed by phase of rapid exponential growth as the canopy reaches maximum area and finally growth rates decline as the canopy senesces(Solubo,1972).maturity has not been well defined in yam even though it is traditionally measured by dryness of vines (Okoli,1980). Osagie and Oputa (1981) also reported that the physiological stature of yam tuber as harvest may influence its storage period and food quality characteristics.