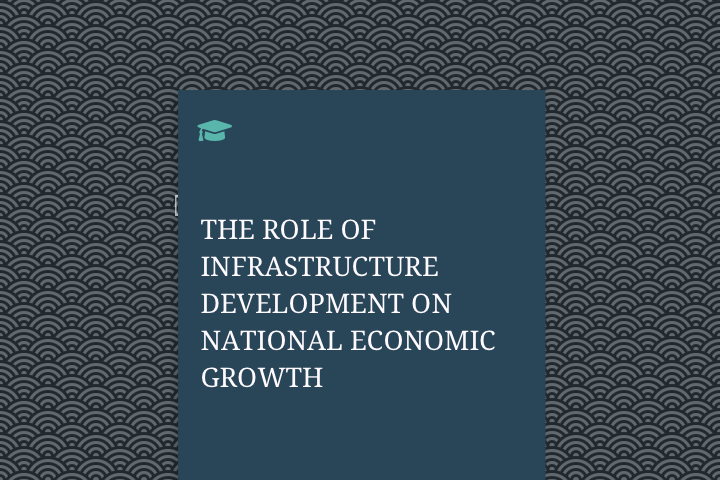 The Role Of Infrastructure Development On National Economic Growth: A Case Study Of The Telecommunication Sector In Nigeria (2000-2010)

It takes little analysis to see that infrastructure plays a major role in the economy of a country, whether developing or developed. The need for good infrastructure management is of great importance to the economics of countries all over the world and the various sectors of the economy need to be understood. The world is fast becoming a global village and a necessary tool for this process is communication of which telecommunication is a key elements. Development in the telecommunication industry all over the world is very rapid as one innovation replaces another in a matter of weeks.

Nigeria is part of this race for rapid developments, as the years of economic reversal via mismanagement have had adverse effects ton its rate of growth and development. The Nigeria telecommunications sector was grossly underdeveloped before the sector was deregulated under the military regime in 1992 and placed under the jurisdiction of the Nigeria Communication Commission (NCC) since then, the NCC has issued various licenses to private telephone operators. These licenses allow private telephone operators (PTO) to roll out both fixed wireless telephone lines and analog mobile phones. The return of democracy in 1990 however paved the way for the granting of GSM licenses to three service providers, MTN, ECONET (which is now AIRTEL) and NITEL Plc in 2001 with GLOBACOM joining in 2003. Telecommunication is a major driver of any economy infrastructure which is therefore regarded as a vital instrument in ensuring economic development. Attention this work would be focused on this area of Endeavour, as it appears to be one of the most neglected areas of economic development goals in most countries today.

1.2 SIGNIFICANCE OF THE STUDY

The following are the objectives of this study:

1.4 STATEMENT OF THE PROBLEM

Infrastructure of any country is of immense importance to that country whether developed or developing. It is therefore of outmost necessity that the various infrastructure of a country should be managed in proficient ways which will serve not only as pride to such country but also as an encouragement to other countries towards economic development.

The various propositions for this research work include;

The research questions or the hypothesis could be defined as a provisional assumption made in order to investigate the logical consequences. It could be also be defined as the ideal suggestions, postulation, or assertion put towards starting points for reasoning but with awaiting validities.

The various points this research seeks to investigate is enumerated below:

This study has reported empirical findings on the perception of her stakeholders regarding the impact GSM on Nigeria rural economy. However the study has a number of weaknesses. These includes the fact that it drew samples, the perception of the work force linked to the petroleum sector were not included in the target population of he study despite the fact that petroleum comes from rural areas and it has impacted the economy in those zones. In the light of all these identified limitations and shortcomings future research is needed to extend the scope of the study to cover those limitations.

INFRASTRUCTURE: This refers to the basic physical and organizational structures needed for the operations of a society or enterprises or the service and facilities necessary for an economy to function. The term typically refers to the technical structures that support a society such as roads, water supply, sewers, electrical grids; telecommunication etc. viewed functionally infrastructure facilities the production of goods and serves.

ECONOMY: An economy consists of the economic system of a county or other areas, the labour, capital and land resources, and the economic agents that socially participate in the production, exchange, distribution and consumption of goods and services of that area.

ECONOMIC GROWTH: Thus is defined as the increasing capacity of the economy to satisfy the wants of goods and services of the members of society. Economic growth is enabled by increase in productivity which lowers the inputs (labour, capital, material energy etc) for a given amount of output. Economic growth is concerned with he log run trend in production due to basic causes such as industrialization.

ECONOMIC DEVELOPMENT: This refers o the increase in the standard of living in a nations population with sustained growth sustained growth from a simple, low-income economy to a modern high-income economy.
It typically involves improvements in a variety of indications such as literacy rates, life expectancy, and poverty rates. A country’s economic development is related to its human development, which encompasses, among other things, health and education.