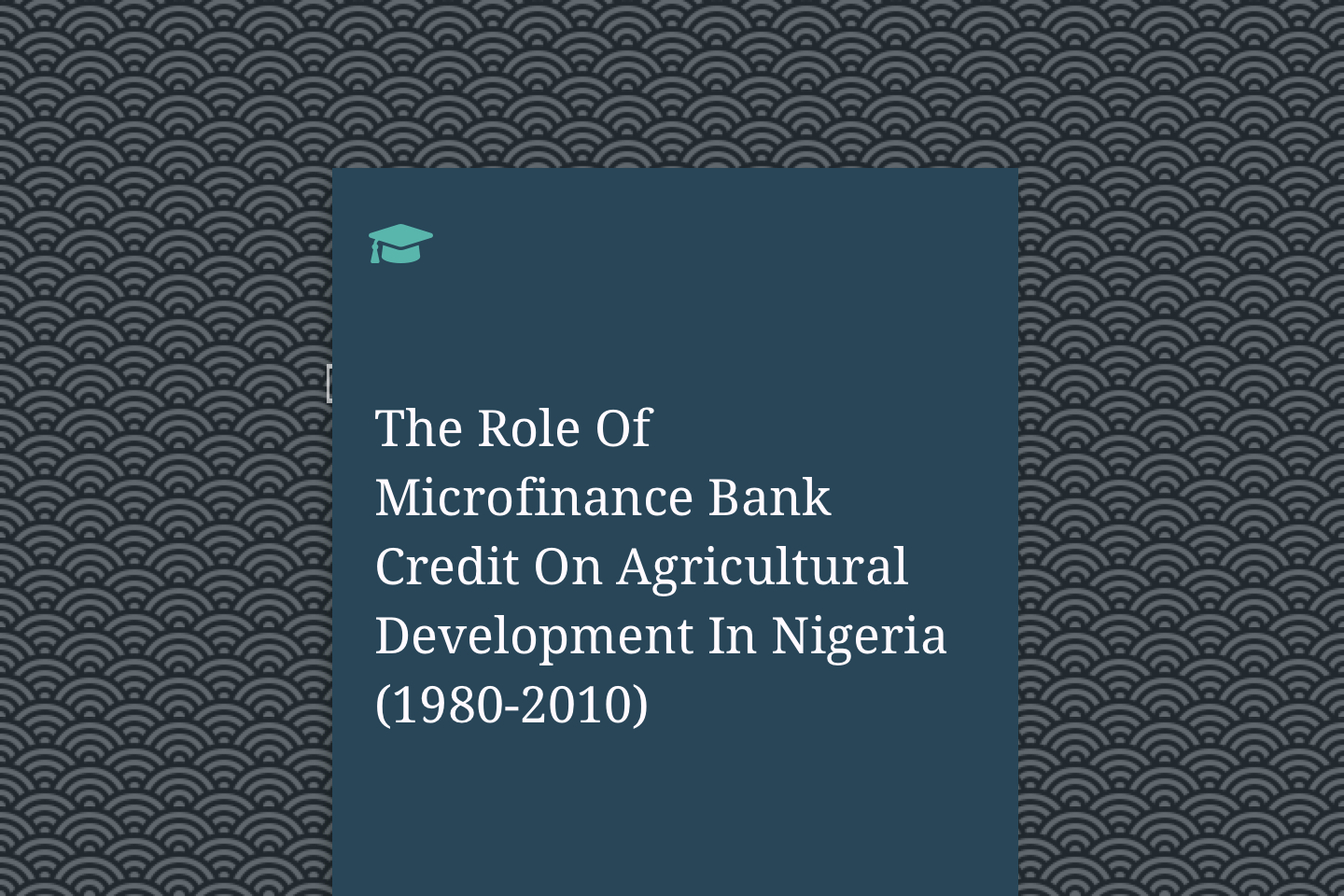 This research work tries to investigate the role of microfinance bank on agricultural development in Nigeria using Nigeria as a case study. Using ordinary least square method, data collected were secondary data and the durbin-watson t-statistics were used in the regression analysis. The study shows that Microfinance bank loans have a positive impact on agricultural development in Nigeria. Based on these findings some recommendations were made, interest rate should be reduce to encourage farmers in borrowing and The federal government should give a directive through microfinance bank that will encourage the farmers by giving them incentives. This will automatically increase the efficiency of farmers and thereby attract more youths to the agricultural sector.

1.1 BACKGROUND TO THE STUDY

Prior to the discovery of petroleum in Nigeria agriculture used to be the highest foreign exchange resources earner and contribution to gross domestic product GDP has been estimated to about 62.63% in 1960, 48.08% in 1970s, and 20.63% in 1980. Recently due to the growing awareness of the role of agriculture, the various governments have intensified efforts aimed at transforming from its present subsistence level to a market oriented production. One of those efforts was the ban made on importation of agricultural products like palm oil, maize and rice. This was done to encourage improvements on our production standard.

Due to the fall in the level of production from decade to decade, the country could no longer feed the large population, provide raw material for domestic-industries,
engage in export of agricultural produce and employ the labor force of the country despite the abundance of human and material resources.
In spite of growing urbanization, Nigeria is known to be predominantly rural in natural and majority of population is dependent directly or indirectly on agriculture for their live hood. Credit delivery is perhaps one of the most important roles of microfinance banks, as the loans extended are used to expand existing businesses and in some cases to start new ones. According to CBN (2008) microfinance loans granted to clients is increasing from 2007 to date and most of it goes to financing micro-enterprises in rural areas.

Ketu (2008) observed that Microfinance banks have disbursed more than eight hundred million micro-credits to over 13,000 farmers across the country to empower their productive capacities. As such it is expected that agricultural output will increase with the increase in finding. The entrepreneurial capacity of the farmers we thus improve.

According to Anyanwu etal (1997:14) “the agricultural sector has been recognized for a long time as an important sector to Nigeria economy and development is one of the crucial requirements for the overall economic growth.

He noted further that the declined in agricultural activities might appear natural in any development process, it is obvious that in Nigeria agricultural activities would remain the most important single sector for some time to come. He emphasized that in the past, development planners have introduce programs such as national accelerated food production project (NATPP), green revolution programs (GRP), In search for all appropriate technique in order to increase farm output and productivity and such program have at one time been implemented.

Based on these, a number of problems one facing the agricultural sector and they are as following. Inadequate finance or credit facilities, inadequate farms input, lack of storage facilities, lack of basic amenities, Lack of technical know-how, lack of research and illiteracy of the farmers.
The questions to which this research will provide answers to one, is the credit advanced to farmers through microfinance adequate to have a significant impact on agriculture? All these problems can be solved or rather reduce when there is adequate financing.

Microfinance banks loans have no significant impact on agricultural development in Nigeria.

Microfinance services, particularly those sponsored by the government have adopted a traditional supply led subsidized credit approach mainly directed to the agricultural sector and other non-farming activities, but the effect has short lived.

The Nigerian economy stands to derive lot of benefits if concrete steps are taken to salvage the agricultural sector opinions are divided as the actual benefit of micro-finance policy, regulatory and supervisory framework and how it can develop economy, most especially the agricultural sector because it has grasps of the challenges facing agriculture.

To the researcher, this work will serve as an avenue to broaden my knowledge, as it places a challenge that will expand my intellectual horizon by and applying various economic tools analysis draw conclusion for future analysis. It is also expected to serve as an impetus for further researchers in this area of study. It should not be considered as an end to research and policy making but as a guide taking into consideration of its limitation.

To the government and its agencies, it looks at earlier policies designed and why they failed. Therefore it is hoped that it will provide a useful guide to policy makers in agriculture for steady and consistent policies and programmes in terms of funding.

To the society, this researcher’s work will create awareness of the microfinance services that enables them engage in economic activities to be self-reliant, increase employment opportunities, wealth creation, growth and development. Finally, the salient findings of the study will also make the farmers to be more oriented in agriculture.

The scope of this research covers the period from 1980 to 2013. The period is significant because a lot of measures were adopted following the advert of crude oil and its collapse. That is pre-sap and implementation and role in financing the agricultural sector.