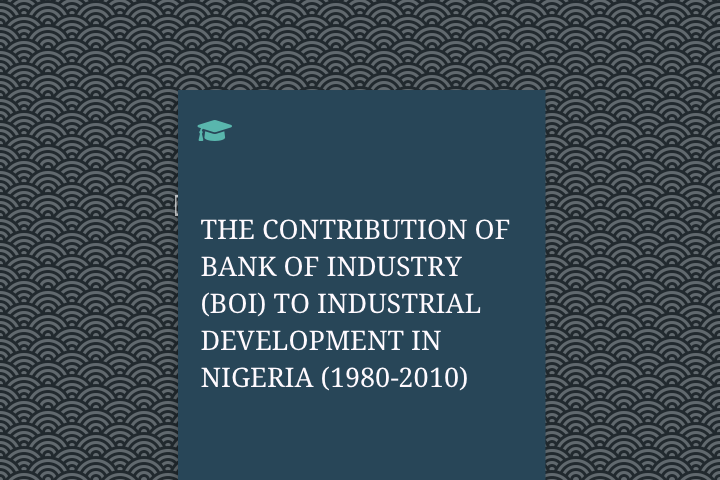 Industrial financing organizations have undergone a structural transformation during the last three decades in most developing countries. In this process of transformation, industrial development banks have emerged as catalytic agent of industrial and economic growth. This work is aimed at examining the contribution of the Bank of Industry (BOI) to the industrial development of Nigeria. Industrialization is regarded by the government as a sine qua non for National effort to achieve the degree of self reliance and confidence which are required to maintain the stability necessary for social place at home and equally master the respectability which serves as an essential ingredient for meaningful involvement in international affairs and interactions.

The Bank of industry (BOI) was thus created to vigorously pursue this aspiration of the government. In fact with the increasing activities of (BOI) and Nigerians position among other African Countries especially those of the Economic Community of West African States (ECOWAS) and a great opportunity to develop the export sector. The United Nations strongly expressed the views that for development to take place, Net investment in the country should be increased from 50 percent to at least 10 percent, it could then be argued that control facet of economic development is rapid capital accumulation including knowledge and skill.
Orthodox writers like Lewis and Rostow (1998) have proposed that industrialization is the engine which projects the development process of an economy.
This proposition was derived from a general station of the historical experience of the present day developed countries whose development took the form of an industrial revolution several arguments could be advanced in favor of industrialization. It is more likely to bring a change in attitudes, technical progress and structural transformation which development was assured to entail.

The level of productivity associated with any other sector. The result of the investigation provides alternative employment for the labour force and this would relieve pressure on the land. Most important of all is the linkage effects. It has the highest capacity of linkage with other sectors of the economy.

The encouragement of indigenes as well as foreign enterprises would, among other things, enhance the economic development of Nigeria.
The appropriate institution that could carry out the function effectively is BOI. If BOI increases and effectively channels its finance activities management and technical assistance to investors in the industrial sectors, it will undoubtedly facilitate growth and development in the economy. BOI, as an industrial development finances institution, finances activities which include textiles, metal products non metallic minerals products and also hotels of international standards.
It provides medium and long term financial assistance only to limited liability companies registered in Nigeria and complying with the enterprises, promotion of 1972 and sometime makes equity investments. The numerous problems that plague the industrial sector like low level of technology, low level of investment, infrastructural administrative and structural frame work have hindered this sector from contributing substantially to economic development. To surmount this problem will require not only finance institutions like commercial banks, but more essentially degree of economic power by the choice of Projects or assets on which it places it funds that are generated from both local and foreign services. NIDB has existed for over thirty years, yet its impact has not been immediately felt (Hirschman 1977).

Consequently, some questions reality come to mind as regards to performance of BOI via-visa development in the industrial sector in particular and in the economy as a whole.

In most of the developing countries like Nigeria, industrial financing organizations have undergone a structural transformation during the last four decades.
In this process of transformation industrial development bank have emerged as a catalytic agent of industrial and economic growth.

Development banks are crucial in the economic development process of a country. In Nigeria the development of financial institutions for development purposes could be traced to 1946 when the ten years development plan was launched by Britain. The first to emerge in the scene was the Nigerian Local Development Board (NLDB), which made loans and grants to native authorities, corporative societies and other related bodies were established and recognized. At the definite of the board, the northern, Eastern and western Regional development boards and Colony Development Board (CDB) were setup thus, financial assistance to industrial and agricultural projects. However, they had limited resources at their disposal though their impacts were not widely felt.

In 1956, the western region finance corporation (WRFC), the federal loans Board (FLB), the Northern Nigeria Development Corporation (NNDC) and the Eastern Nigeria Development Corporation (ENDC) were established to promote industrial development in the country. The first official development bank was NLDB (1946-1949). The second development finance institution was CDB (1949-1956). It was established with N100,000 grants from the regular government budget plus the colony share of the asset of NLDB which has been shared among the regional components in the country. It was charged with the dual role of facilitating both government and private economic activities. FLB was the third development finance institution, it was established in 1956 with one an initial grant of N600,000, with the following functions:

During the period of the colonial development board in 1946, Regional Development Boards like ENDC and NNDC were set up to operate on the regional level. With the establishment of HLB, the various regional development boards loan shares increased. All the development finance institution at various levels had defects.

Firstly, they in most cases had every wide and ill-defined responsibility much beyond their special capabilities. In the attempt to narrow down their area of operations, almost to the points of putting themselves out of business and operation for instance FLB. In addition to its original restrictions on loans to trading and foreign owned enterprise refused to grant loans to set up new business on the ground that new investors are inexperienced and lack of knowledge of new ventures. It also denied loans to prosperous enterprises on the grounds that they were capable of raising capital from normal sources.

Furthermore, it made working capital loans on the grounds that they were capable of raising capital that could be gotten from commercial bank management deficiency contribution in no small measure to the poor performance of the finance corporations.

The operational defects and inefficiencies of the regional development boards are summarized in the finding of two commissions of enquiry. The caller commission of inquiry into the affairs of certain statutory corporations in Western Nigeria and the comprehensive review of the past operations and method of the Northern Nigeria Marketing Board, the finding of the two commissions revealed that many of the projects were recklessly entered without any regards, whatsoever, for the safety of the resources that were being invested in the various undertakings.

1.2 STATEMENT OF THE PROBLEM:

Labour may be abundant but the gross national output of the less developing countries (LDC’s) remain limited by. It is widely recognized that the LDC’s must make additional efforts to mobilize and achieve effective use of their available resources. The mobilization of external resources requires policies that would facilitate the process of capital accumulation.

Many economists, including Rostow and Lewis, emphasized capital accumulation as the major factor governing the rate of the development (Udabah 1999).
BOI has carried out its mandate under difficult conditions with Government support; it has been able to overcome many operational and organizational
problems. A few lessons may be drawn from experience. First, the assumption of the exchange risk by BOI’s sub borrowers in a context of exchange rate instability (a major devaluation took place in September 1986 as part of the adjustment process) had seriously affected their viability and thus undermined BOI’s own portfolio quality and credit worthiness, although the government did subsequently step in to share the exchange losses. This emphasizes the importance of DFI’s having a reasonable balance between foreign currency and local currency liabilities. Secondly institution building is a slow and continuous process, lack of discipline in following sound banking practices and inadequate commitment to continue staff training could adversely affect the institutional effectiveness. Thirdly, the BOI should have contained to some extent its zeal for its development rule and maintained a better balance between developmental and commercial objectives. Lastly, BOI’s experience emphasizes the need for more thorough sensitivity analysis of all subprojects to take accounts the impact of changing economic situations.

The study revolved or tries to answer the following research questions;

The broad objectives of the study are to examine the contribution of the bank of industry to industrial development in Nigeria.

Specifically, the study seeks to achieve the following:

The hypothesis of this study includes:

The significance of this study is that it addresses the directed emphasis on industrial development banking as an engine of growth and development. It also helps in revealing the prospects and problems of BOI with reference to its performance in the Nigerian economy. It will provide guidelines to policy makers in formulating policies relating to industrial financing. It is hoped that present work regard further research this field.
The study will put into proper perspective role of developing banks in developing countries.

This study covers the entire development efforts of BOI particularly in the industrial sector and in the economy as a whole.
In view of numerous difficulties associated with data collection and financial constraints, duration of twenty nine years (1980-2010) will be considered the coverage embodies the number of sanctions and the disbursements, during the period. Sub-sectarian distribution of the sanction and disbursement will be considered particular attention will be paid to the attempt made by the government in terms of the first supply and other sources of fund available to the bank within this specific period.