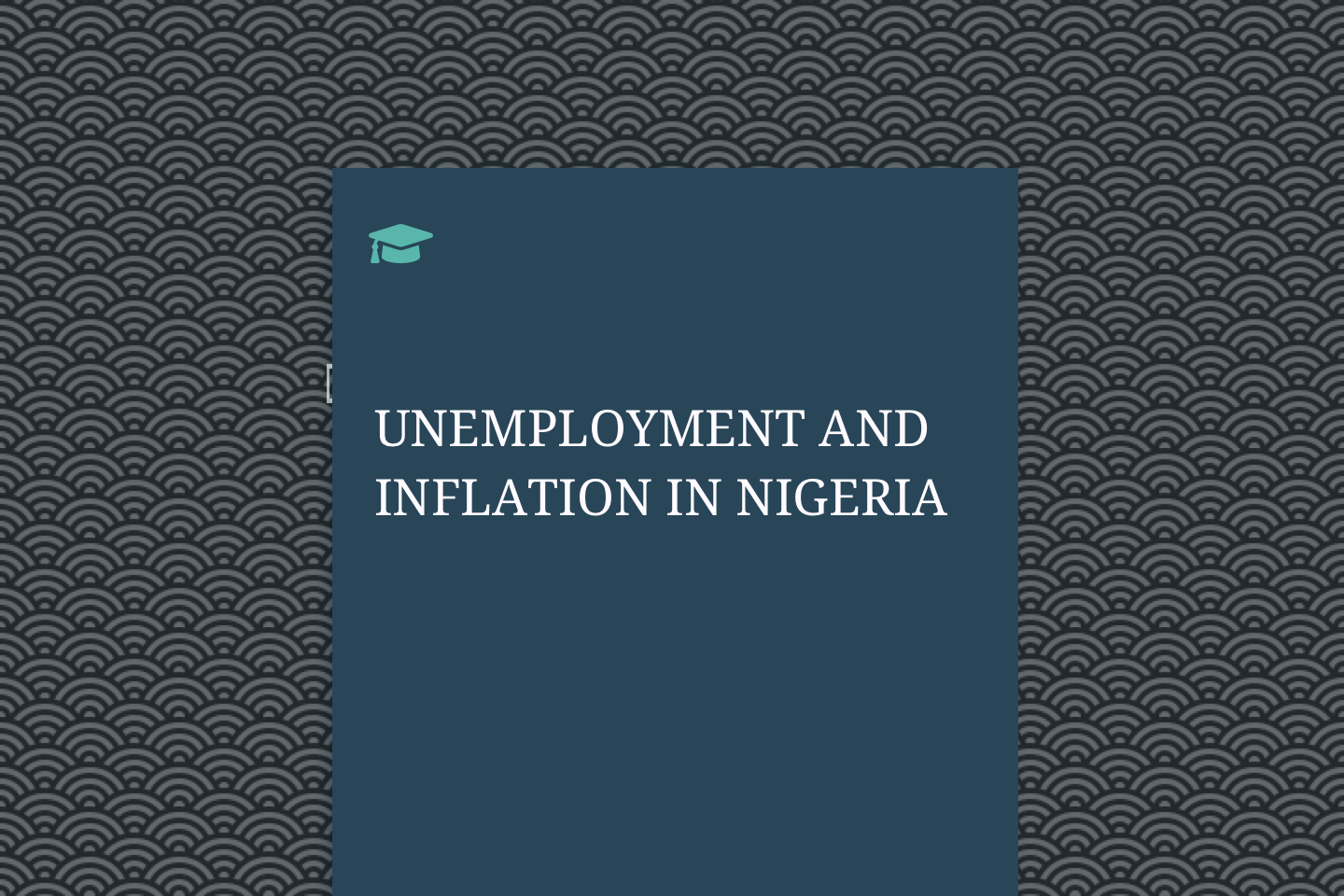 UNEMPLOYMENT AND INFLATION IN NIGERIA

1.1 BACKGROUND OF THE STUDY:

Undoubtedly, parts of the macroeconomic goals which the government strives to achieve are the maintenance of stable domestic price level and full-employment. Macroeconomic performance is judged by three broad measures- unemployment rate, inflation rate, and the growth rate of output (Ugwuanyi, 2004).
Unemployment has been categorized as one of the serious impediments to social progress. Apart from representing an enormous waste of a country‟s manpower resources, it generates welfare loss in terms of lower output thereby leading to lower income and well-being (Raheem, 1993).

Inflation on the other hand, has been a major problem in the country over the years. Inflation is a household word in many market oriented economies. Although several people, producers, consumers, professionals, non-professionals, trade unionists, workers and the likes, talk frequently about inflation particularly if the situation has assumed a chronic character, yet only selected few know or even bother to know about the mechanics and consequences of inflation.
Prior to the emergence of what became to be known as the unemployment and inflation trade-off or Phillips curve in 1958, unemployment and inflation were considered and treated in economics as distinct subjects. Keynes for instance described inflation as the excess of expenditure over income at full-employment level. He contended that the greater the aggregate expenditure, the larger the inflationary gap and the more rapid the inflation. As for unemployment, the Keynesian economists hold that an increase in unemployment reduces income, which reduces consumption, and reduces aggregate output. As a result, employment can be increased by increasing consumption or investment.

The monetarist on the other hand, explained inflation in terms of excessive growth of the money supply relative to real output. Their view on unemployment, however, is framed within the context of Milton Friedman‟s permanent income hypothesis. Based on the Permanent Income Hypothesis (PIH), a reduction in employment and current receipts only affects output to the extent that the anticipated income declines.

Each school of thought offered its own policy solutions. There were however, no major attempts made to examine inflation and unemployment simultaneously.
It was not until 1958, following the introduction of Phillip‟s curve by A.W. Phillips, that traditional economics began to examine unemployment and inflation simultaneously, thereby postulating a trade-off between inflation and unemployment- a lower inflation rate must be willing to put-up with a higher level of unemployment, and vice-versa. However, economists such as Milton Friedman and Edmund Phelps disapproved Phillips‟ curve thesis, stating that the trade-off between unemployment and inflation only existed in the short-run and that in the long-run, the Phillips curve is vertical. This led to the introduction of the Natural Rate Hypothesis. Also, empirical analysis carried out by other economists over the years, have in one way or the other disproved the authenticity of the trade-off thesis as postulated by Phillips. Both high inflation rates and high unemployment rates were discovered to co-exist, giving rise to what has come to be known as stagflation. These twin problems are currently crucial elements of most Less Developed Countries‟ economic crisis.

Unemployment and inflation are issues that are central to both the social and economic life of every country. The existing literature refers to unemployment and inflation as constituting a vicious circle that explains the endemic nature of poverty in developing countries. And it has been argued that continuous improvement in productivity- which brings about the adequate supply of goods and services – is the surest way to breaking the vicious circle.
The Nigerian experience of the crisis of unemployment and inflation was delayed until the early – and mid- 1980s with the collapse of oil prices on which the economy had become dangerously dependent on. Before the 1980s, previous records showed that the Nigerian economy was able to provide jobs for its increasing population, and was able to absorb considerable imported labour in the scientific sectors. The wage rate compared favourably with international standards, the inflation rate was moderate, and there was relative industrial peace in most industry sub-groups.

The oil boom in the 1970s led to the mass migration of youths into the urban area, seeking to get work. However, following the recession experienced in the 1980s, the available data revealed that, the problem of unemployment started to manifest, precipitating the introduction of the Structural Adjustment Programme (SAP), the rapid depreciation of the naira exchange rate and the inability of most industries to import the raw materials required to sustain their output levels.

A major consequence of the rapid depreciation of the naira was the sharp rise in the general price level (inflation), leading to a significant decline in the real wages. The low wages in turn fuelled a weakening purchasing power of wage earners and a decline in the aggregate demand. Consequently, industries started to accumulate unintended inventories and, as a rational economic agent, the manufacturing firms started to rationalize their market prices. With the simultaneous rapid expansion in the educational sector, new entrants into the labour market increased beyond absorptive capacity of the economy. Thus, the avowed government‟s objective of achieving “full employment” failed. The research work is therefore intended to access the applicability of the trade-off thesis in Nigeria.

1.2 STATEMENT OF THE PROBLEM:

Anthony De Mello, in his famous book titled „Awareness‟ stated that, “Life is a banquet. And the tragedy is that most people are starving to death”. This situation is prevalent in the Nigerian economy. Nigeria is richly blessed with abundant human and natural resources, but still finds itself battling with high unemployment and inflation rates, due to years of neglect of the social infrastructures and general mismanagement of the economy. Previous governments in their own capacities have been embarking on various policies to control inflation and reduce the level of unemployment in the country. However, government efforts have not yielded the desired results as these problems are known to be skyrocketing rather than plummeting.

The problem of inflation in Nigeria was brought about by the oil glut in 1981, which resulted into balance of payment deficits leading to foreign exchange crisis that necessitated various measures of import restrictions. These restrictions reduced raw materials for domestic production and spare parts for machinery operation. The resultant shortage of goods and services for local consumption spurred the inflation rate to rise from 20% in 1981 to 39.1% in 1984 (Itua, 2000).
With the adoption of the Structural Adjustment Programme (SAP) in 1986, there was a temporal reduction in fiscal deficits as government removed subsidies and reduced her involvement in the economy. But as the effects of the Structural Adjustment Programme (SAP) policies gathered momentum, there was a fall in the growth rate of Gross Domestic Product (GDP) in 1990 from 8.3% to 1.2% in 1994, with inflation rising from 7.5% (1990) to 57.0% (1994). In 1995, inflation rate rose to 72.8% due to increased lending rate, the policy of guided deregulation, and the lagged impact of fiscal indiscipline.

The increase in unemployment in Nigeria, on the other hand, has resulted to decrease in consumption, due to low income earned by the citizens, thereby resulting to low production- the inability of firms to sell their goods, forces them to reduce their output. This has led to decrease in the economic growth of the nation.

Unemployment also has social consequences as it increases the rate of crime. Also, being without a job in Nigeria, is as good as losing your self-respect and self-esteem among the people of your age bracket. The proportion of workers who are unemployed shows how well a nation’s
human resources are used and serves as an index of economic movement (positive or negative).

In the light of the foregoing analysis, the research work will be guided by the following question:

1.3 OBJECTIVE OF THE STUDY:

The primary objective of this study is to examine if there is any trade-off relationship between unemployment and inflation in Nigeria. Other objectives include;

1.5 SIGNIFICANCE OF THE STUDY:

The research work intends to study unemployment and inflation situation within the Nigerian economy. The study will cover the time period 1986-2011 (a period of 25 years); this is to ensure updated information and to follow the trend. The range was chosen based on
data availability and to have adequate observation for a meaningful analysis.

1.7 LIMITATIONS OF THE STUDY:

When carrying out research in social sciences, the data that one generally encounters are non-experimental in nature, that is, not subject to the control of the researcher. Therefore, this lack of control may create special problems for the researcher in pinning down the exact relationship that exists between unemployment and inflation in Nigeria.
In the course of the study, the researcher tried to access the CBN statistical bulletin of 2010, but was unable to get data for the figures of unemployment and inflation in 2011. He therefore resorted to accessing the internet for the missing figure for 2011. The researcher also encountered the challenge of inadequate and incomplete information from the internet and the school library. The researcher was also faced with the problem of unavailability of funds to carry out the research work.